The 39-story, 447-unit Gio Midtown was built to be one of Miami's trendiest new apartment buildings. There's a fifth-floor pool deck, a 4,500 SF gym, a basketball court and a Himalayan salt room.

After 31 months of construction, the building at 3101 Northeast First Ave. began leasing in January, with studios starting at $1,695 per month and three-bedrooms going up to $6,040. But Gio Midtown received its Temporary Certificate of Occupancy from Miami-Dade County just as the coronavirus was peaking, and welcomed its first residents April 15. 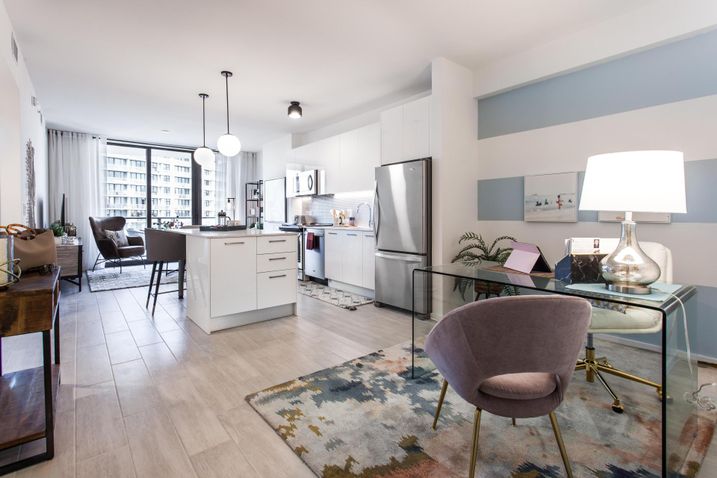 Gio Midtown General Manager Ashley Wade told Bisnow that so far, the property — which was developed by Chicago-based Magellan Development Group and J.P. Morgan Asset Management and managed by Bozzuto — has rented 38 units, about 8% of the building.

"It's definitely less than what we thought, but leasing is still going great, all things considered," Wade said.

As it dawned on her team members over the past few months that the virus would coincide with opening day, they beefed up online showings, hired extra cleaning staff, arranged for people to sign leases electronically and limited the number of people going on elevators — one at a time, or up to four people from the same family.

Common areas are closed, so people can't have a coffee at the lounge or get their pet groomed at the spa. A private outdoor playground, a game room, a family lounge, a conference room, a bicycle workshop and electric car chargers are all waiting to be used.

Bozzuto Chairman Tom Bozzuto, whose company manages 70,000 units, said during a Bisnow event Tuesday that he was "frightened" about how much rent the company will collect in May because of governments that had declared moratoriums on evictions. Miami-Dade County has such a measure in place indefinitely.

Gio Midtown could be competing with AMLI Midtown, an adjacent 719-unit luxury building scheduled to open this summer, with studios to three-bedrooms ranging from $1,850 to $3,900, plus fees.

So far, Gio has neither lowered rents nor move-in requirements. To move in requires a $75 application fee, a $500 security deposit and a $400 annual amenity fee, Bozzuto said.

Bozzuto Regional Vice President Lauren Athas said that the location bodes well for the long-term as the pandemic hopefully recedes, and she's looking forward to "a great spring and great summer."