David Beckham's new Major League Soccer team, Inter Miami, is already signing players for its inaugural season — there are rumors Beckham is trying to recruit top international star Lionel Messi from Barcelona — but the team doesn't yet have a permanent place to play its pro games. 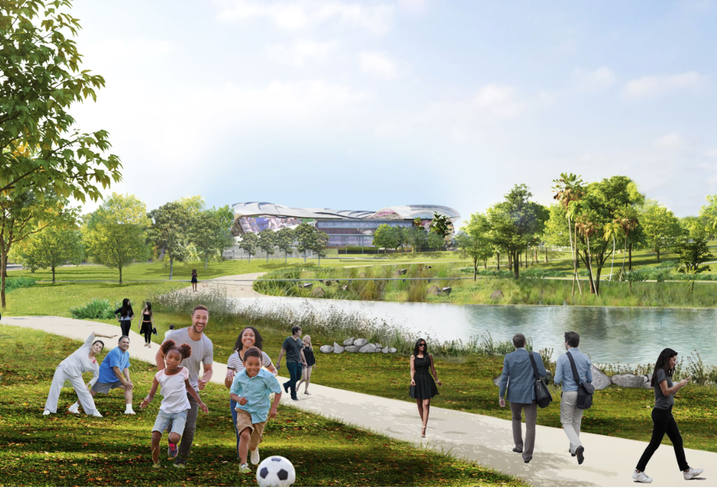 A special meeting Tuesday of the Miami City Commission had potential to sidetrack or derail plans for a stadium there, but the politicians ultimately allowed negotiations with the team to continue.

Beckham's business partners, including newly installed WeWork Chairman Marcelo Claure and Jorge Mas, chairman of the MasTec engineering and infrastructure firm, are hoping to build a nearly $1B 25,000-seat stadium complex with hotel, offices and retail on a golf course site owned by the city.

Miami voters passed a referendum allowing the city to bypass its own rules and negotiate a no-bid, 99-year lease with the team. Tuesday's meeting centered on whether lease negotiations should continue and whether the process should be opened up to competitors.

The meeting was called because one commissioner, Willy Gort, a critic of the project, will be leaving office later this month. Miami Mayor Francis Suarez, who doesn't have voting power but can veto commission decisions, argued that voting on the lease would be premature because appraisals to determine fair market value are not complete. Factors such as base rents and construction deadlines are still undetermined.

Multiple commissioners expressed confusion over exactly what they were voting on during the meeting. Commissioner Manolo Reyes complained about the opacity and length of the process and asked lawyers who are handling negotiations to give updates. They responded that there are still variables such as traffic and what would happen if the team is ever sold. Commissioner Ken Russell said he would vote against the project if the city loses any green space.

"This deal is not simple," he said. He noted that 600 pages of documents are available online and argued that the process hasn't precluded any other developers from making unsolicited proposals to use the site. Miami Freedom Park would bring jobs and $13.2B to Miami-Dade County, be "transformational" and "leave a great legacy," he said.

Suarez said the city could have put out a request for proposals, but the process it followed was the "the most pure process" because it involved the voter referendum.

Ultimately, the commissioners agreed that they would need to revisit the matter after appraisals and lease terms are solidified. The commissioners voted to discuss it again at their Dec. 12 meeting, when a new commissioner will take Gort's seat.

Because of the uncertainty in securing a Miami site, Inter Miami last year struck a deal to rebuild the vacant Lockhart Stadium soccer complex in Fort Lauderdale, which will be the site of games for two years, after which it will serve as the permanent base for player training and youth operations. It is now under construction and expected to open in time for players to report to training camp in January.

Only about 17 pro games per year would be played at the Miami site. Since Miami taxpayers notoriously were stuck paying $2B toward the Miami Marlins' baseball stadium, many residents are skeptical of sports stadium deals. The spreading of soccer operations to Fort Lauderdale prompted criticism that the Miami stadium deal would be more of a real estate play for developers than a benefit for the community.

And as we sit here in Miami the MLS Soccer Stadium is under construction in Fort Lauderdale. So scammers can leave Miami’s Melreese Park alone. https://t.co/QqRR23G8jt

Mas said during a Miami Chamber of Commerce event in October that he wants the facility in Miami, a global city, but “I am a huge believer that stadiums on their own, stand-alone, are not viable."

"They are not economic engines and drivers," he continued. "Stadiums are an anchor and thrive when surrounded with something that can provide supplemental activity around it. Stadiums need to have life other than just the 17 or so games plus playoffs, so we have aspired to build a soccer village and entertainment pavilion that can attract fans and unite them around activities that go beyond the game.”