Quaint And Sleepy Hollywood Beach Is Poised For Major Redevelopment

Hollywood, sandwiched between Miami and Fort Lauderdale, has seemed quaint and sleepy compared to its big-city neighbors, despite impressive community assets.

The 30-square-mile municipality's amenities include an airport, a walkable downtown, 7 miles of oceanfront and a beachfront pedestrian walkway called the Broadwalk that’s lined with independent restaurants and hotels. Inland are golf courses, residential neighborhoods and the Seminole Hard Rock Resort & Casino. Port Everglades is partly within the city limits.

Soon, a new wave of development is poised to transform Hollywood. The city currently has $1.2B in real estate development planned or under construction, City Manager Wazir Ishmael said during a Bisnow webinar last week.

Ishmael outlined some of the major projects around Young Circle, the downtown city center with a 9-acre outdoor amphitheater and arts park, where Hollywood’s main east-west corridor meets north-south artery US 1. 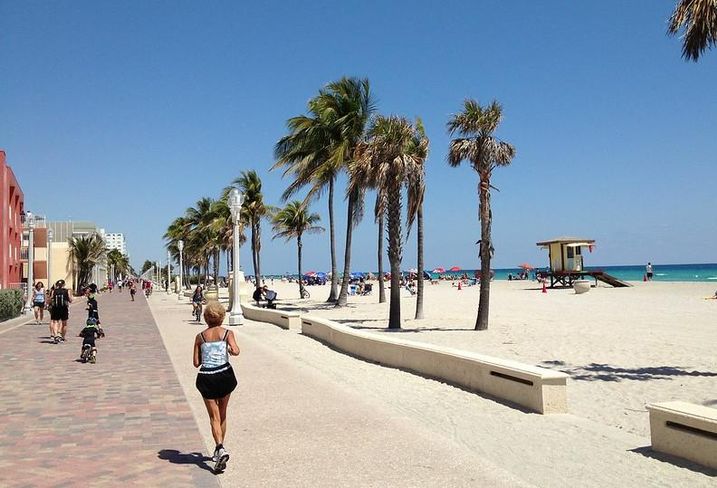 On the southwest quadrant of Young Circle, the $60M Block 40 project is planned from GCF Development. It will have 166 residential units and 103 hotel rooms. On the southeast quadrant, a mixed-use project by BTI Partners will bring 366 luxury rental units and ground-floor retail. The east side of Young Circle is slated for matching towers with two levels of restaurants and retail, also by BTI. South of Young Circle, Hudson Village, a 108-unit mixed-income affordable project by Housing Trust Group, broke ground last year, and Pinnacle at Peacefield, a senior housing community, was recently completed.

Continuum Co. Chairman Ian Bruce Eichner, who has been looking to develop a 4-acre beachfront site in Hollywood, said that beachfront properties farther south in Miami-Dade County “are bloody expensive” but in Broward County, “there's still an opportunity in Hollywood for a beach that is certainly as beautiful as anything south, at a different price."

Webinar moderator Raelin Storey, Hollywood’s director of the Office of Communications, Marketing and Economic Development, said the city has two opportunity zones — one downtown and one between Sheridan Street and Stirling Road near I-95. Storey said that over the past few years, the city adjusted its zoning to encourage development along its commercial corridors.

Keith Poliakoff, partner at law firm Saul Ewing Arnstein & Lehr, said that his client, BTI, is about to break ground on Block 58, formerly known as The Hollywood Bread Building in the downtown opportunity zone. It's planned to include approximately 366 apartment units with 15K SF of retail.

He said construction prices had risen about 10% since the project got underway, but the opportunity zone designation was helping them draw investment to offset the increased costs.

“If you do it right, that savings, that potential tax savings in the future, can actually offset the higher construction price," he said.

Inigo Ardid, co-president of Key International, which owns the Eden Roc and Marriott hotels in Miami Beach, has been exploring possibilities in Hollywood and said he was very bullish on leisure hospitality.

"What we're seeing is in places that people can get to, mostly drive markets, the hotel markets have come back stronger than ever... Our average stay has gone up well in excess of 60% from where it was before."

Related Group Managing Director Eric Fordin said that the once-stunning but long-neglected Hollywood Beach Resort might be redeveloped in time.

"We had the majority of the unit owners under contract to redevelop that property," he said, but the ownership structure is complicated. Not only is there a condo-hotel, Fordin said, but an estate owns the land and the parking garage. A tentative deal he'd made with it fell through at the last minute.

That's not all that makes it complicated.

But that's not to say the project won't happen.

"It's a site that I am laser-focused on," Fordin said.

Fordin lives in Hollywood himself. He said some residents love Hollywood's slow vibe, independent stores and two-story motels that cater to Canadian snowbirds. They don't want Hollywood to be like Sunny Isles, lined with tall towers that create a canyon-like feel. But the quaintness comes with blight.

“Hollywood is always going to be more of a boutique-friendly development opportunity experience,” he said. "I believe once we're able to assemble some properties along the Broadwalk, you'll see some great development impacts for the city, but it's a matter of really aligning all the stars for those things to take place."

The panelists called for more public-private partnerships, but that hasn't always worked out great for Hollywood's taxpayers. For a Margaritaville Resort developed in 2015 by developer Lon Tabatchnick's Lojeta Realty and Starwood Capital Group, the city invested $23M in the development and left the city potentially liable for $84.3M in bond payments for a connected parking garage, the Sun-Sentinel reported.