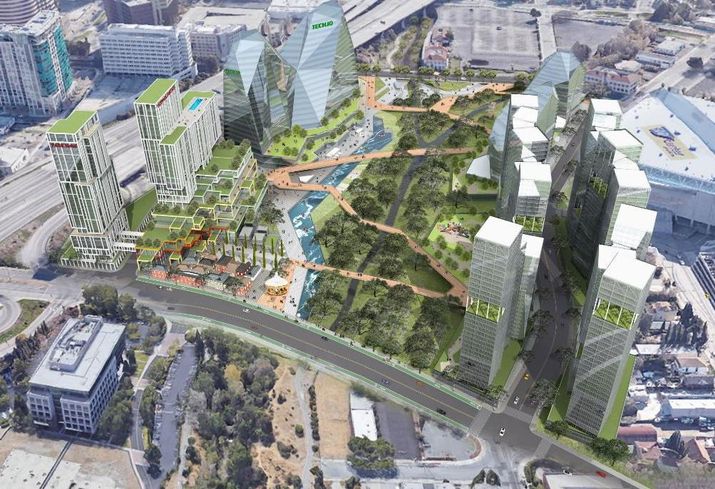 Rendering by Studio Current
Rendering of The District, a plan conceived by developer Swenson and several design professionals for an area near Diridon Station

Thirty acres near Diridon Station could be transformed into an urban retail and activities destination under a plan pitched in a report from developer Swenson, Studio Current, CMG Landscape Architecture and Mayberry Workshop. The report creates a new design for an urban campus in downtown San Jose.

The study offers tangible renderings for the community to focus conversations on the revitalization of the Diridon Station area, and as Google continues discussions with the City of San Jose about its own urban village. The report provides suggestions on how the community could use the right amount of heights and densities through a public-private partnership with San Jose and the Guadalupe River Park Conservancy.

Named The District for study purposes, the area is on the steps of a future BART Station, encompassing Little Italy, SAP Center and Guadalupe River Park & Gardens. It could become San Jose’s Central Park.

The District imagines a vibrant center where people can stroll with friends along meandering bridges, learn something new at the Guadalupe River Park Conservancy Wildlife Center, grab a bite to eat with colleagues in one of 50 new restaurants, cafés and bars or relax on one of the main lawns.