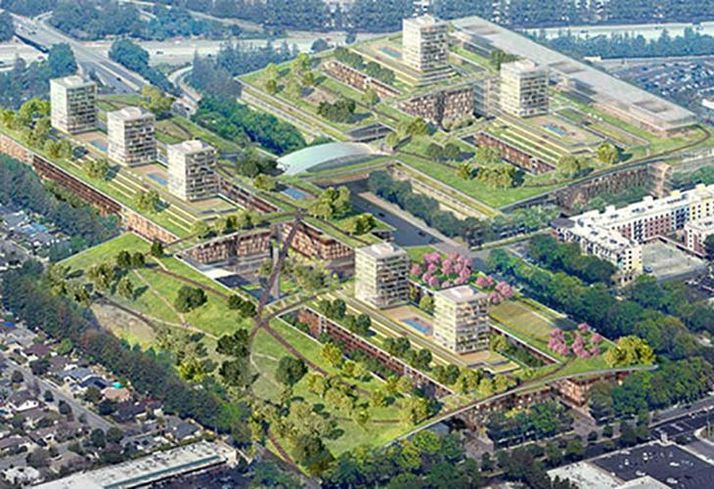 Marking the first time a Bay Area project has successfully moved through the approval process under the state's new law to encourage more housing development, Vallco Town Center has received final project approval from the city of Cupertino.

The city granted approval to the project, which would redevelop the 50.8-acre Vallco Mall site in Cupertino into a mixed-use development, on Friday under a Senate Bill 35 project application. The Vallco project from Sand Hill Property Co. was the first in the Bay Area to qualify for that streamlined process. The development will include 1.8M SF of office, 400K SF of retail and 2,402 housing units, with 1,201 of those units targeted as affordable housing. Plans also include a 30-acre rooftop park and two town center plazas.

“While the SB 35 application has been approved, the City continues to move forward with the Vallco Special Area Specific Plan, which was approved by the City Council on Wednesday,” interim City Manager Amy Chan said in a statement. “The Specific Plan has been the City’s preferred path from the beginning. Unlike SB 35, that traditional planning process has allowed for community dialogue, discussion of priorities, critique of plans, and negotiation of community benefits.”

The city of Cupertino approved the project's SB 35 plans two days after the Cupertino City Council approved a separate plan for the Vallco site, which lays the groundwork for a mixed-use project with more than 2,000 housing units, of which 20% would be affordable, and requires $280M from the property owner for community benefits, such as traffic, school and city uses.

“While the SB 35 project approval is in itself an historic achievement, both Wednesday’s Specific Plan approval and Friday’s SB 35 project approval are critical milestones toward the much-needed revitalization of Vallco and the construction of both affordable and market-rate housing,” Sand Hill Property Co. Managing Director Reed Moulds said in a statement.

SB 35, signed into law by Gov. Jerry Brown to address the state's need for housing, creates a streamlined process for projects that meet certain criteria and designate a specific percentage of the housing built as affordable — in this case, 50%. Under SB 35, a city must approve a project if it meets all of the relevant criteria, which helps projects that may face community opposition otherwise. Sand Hill's plans for the Vallco site had been stalled for years by a vocal group of community opponents.

Such opposition has limited housing growth in the city. From 2007 to 2014, Cupertino met 67% of its regional housing need allocation as required by the state, according to a report by the Association of Bay Area Governments. Of that, the city only met 11% needed for very-low-income housing and 14% for low-income housing. For housing needed from 2015 to 2023, Cupertino had only met 17% in permits issued through April 2017.

Efforts to block or delay the specific plan will factor into which option the developer pursues, Moulds said. Regardless of which plan is selected, the developer can now proceed with demolition on the 40-year-old shopping mall, perhaps as soon as the end of the year.

“This type of project is exactly why we passed SB 35: to streamline and expedite housing approvals in cities that fall short of their housing goals,” state Sen. Scott Wiener, who authored the bill, said in a statement. “Cupertino, like the entire Bay Area, is in desperate need of housing of all kinds. The Vallco project includes historic amounts of market rate and affordable homes. It has stalled for years due to local opposition. If we are serious about digging ourselves out of our huge housing deficit, we need projects like this one."