Seattle Slows To A Halt As Coronavirus Slams Businesses

As recently as the end of February, Seattle bustled.

Finding a parking spot on the street was a futile quest. Today, there is plenty of parking to be had. No one knows when the coronavirus outbreak, which has its American epicenter in Seattle, will subside and streets will refill with people and commerce, but in the meantime, small businesses are taking the brunt of this sudden economic hit. 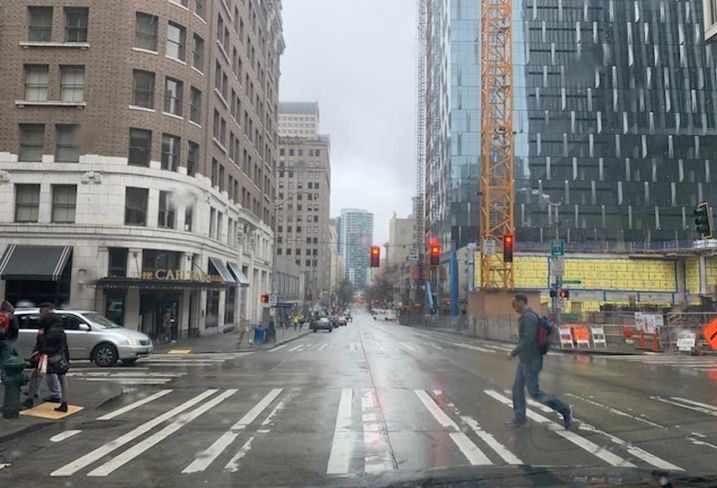 Sock Harbor, a specialty sock store that opened Feb. 14, understands this all too well.

In a normal situation, this is an ideal location, he said. This is the California-based retail company’s first out-of-state site, and it hoped its location near Pike Place market would lure tourists, especially cruise passengers.

Every time a ship docks, 5,000 tourists flood Seattle’s streets. But yesterday, the Port of Seattle canceled the April 1 and April 5 port of call sailings of the 2020 cruise season, temporarily ending the one-day stopovers in Seattle. Most sailings at the Port of Seattle are homeport sailings, which generate $4M each for the local economy. The cruise season typically generates $900M of business activity in Seattle and supports 5,500 jobs.

Cruz said he expects his store will take a hit in the next few weeks. It’s too early to say whether or not they will need to close or reduce hours.

“I’m worried about the livelihood of the employees,” he said.

He hopes the building owners will work with small businesses in an effort to support them.

“It would be nice if we could all take this hit together as a community."

Some major employers are stepping in to help small businesses like this. Amazon is creating a $5M Neighborhood Small Business Fund to help support the small businesses near its South Lake Union campus to help businesses impacted by the sudden loss of its employees’ business.

Meanwhile, some downtown hotels are reporting a 40% to 60% decline in occupancy, Downtown Seattle Association President and CEO Jon Scholes said.

“A number of small businesses have made the difficult decision to close their doors or lay off employees,” he said. “We are in uncharted territory as a community and a country. Our commitment to our members during this time is to listen, advocate on their behalf for economic relief, help them access available resources, and begin preparing now to support a recovery downtown.” 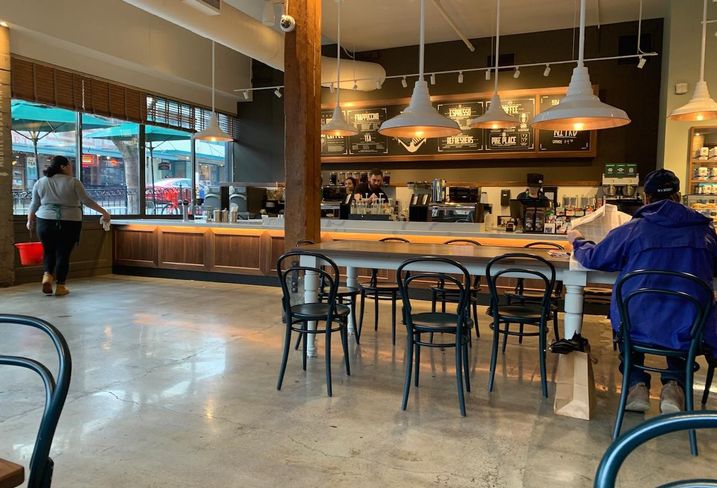 Bisnow/Shawna De La Rosa
The Starbucks at First and Pike, which is directly across the street from Pike Place Market, is nearly empty Friday afternoon.

Scholes said he has gratitude to the state and local public health officials and for the Downtown Seattle Association members who are supporting those in need, as well as the private business community that is offering support.

“The leadership of the private sector and our close partnership with the public sector is absolutely critical at this time,” he said. “We strongly encourage those that are able to support these efforts.”

CRE leaders in other states hit hard by the virus have been urging the commercial real estate industry to continue doing business as well as it can. Barry Broome, president and CEO of the Greater Sacramento Economic Council, said the best thing the commercial real estate industry can do to support the economy during this time is to keep going forward.

“If health officials do a good job handling the public health side, we can get through this in six to 12 months,” Broome said. “If you plan on building a 500K SF office building or a 250K SF multifamily building, just keep building it. There may be a small drop in the price of construction material prices. The interest rates are low.”

The biggest impact will be on small businesses, and the residual effect will be fewer taxes collected, he said.

Wall Street is panicking, but it’s resilient, he said. There aren’t too many places that exhibit a bubble. Banking is strong. The housing market is strong.

“The builders need to keep building with confidence,” he said. “This isn’t 2008. This is more like 2001. People will eventually see this as a blip on the radar screen.”