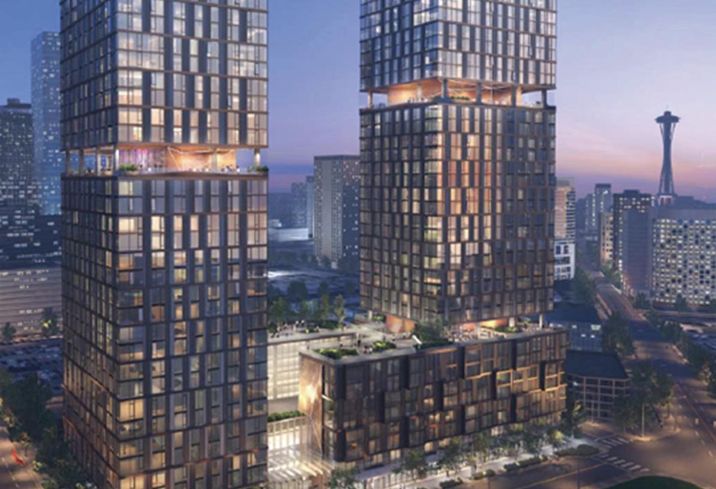 Courtesy of Kidder Mathews
Concord Pacific purchased a mixed-use development site in Denny Triangle for two high-rise towers. There are 19,500 rental units in the pipeline in the greater Seattle metro area.

Approximately 9,990 apartment units will be delivered in 2019, according to a report by Marcus & Millichap.

That figure keeps with a five-year trend of similar rental unit deliveries in the greater Seattle area. In 2018, 10,040 units were delivered.

Despite the high number of units coming on the market, demand continues to outpace supply. The vacancy rate fell to 4.3% this year, while the rent climbed 4.4% to an average of $1,768 per month for a one-bedroom apartment. This follows a 4.2% increase in rent prices in 2018.

Seattle is considered one of the most active apartment markets in the country, according to the report. Since 2015, more than 46,000 rental units have been added. In the second quarter, 19,500 units were in the pipeline.

Many of these units are centered around high-density employment centers and light-rail transit stops. Developers are beginning to look to Pierce, Snohomish and South King counties since rents are lower in these suburban markets.

Another factor driving the growth is the fact that Seattle City Council upzoned 27 neighborhoods this year, which allows for increased density and low-income units. The upzoning was done in Central District, West Seattle, Ballard and the U District.

Eastside, including Bellevue and Redmond, is also seeing rental unit growth. Hyde Square, in East Bellevue, opened 617 units. Both Amazon and Microsoft are adding jobs on the Eastside. Microsoft’s Redmond campus overhaul will add 8,000 workers. Jobs are also being added on the Eastside and South Lake Union by Facebook and Google.