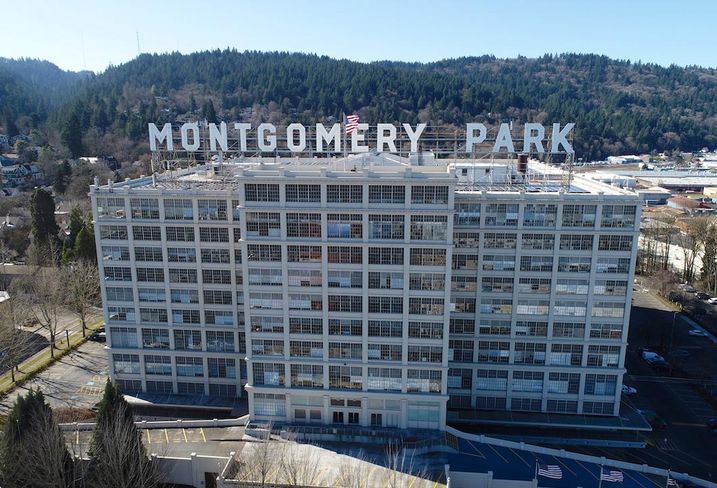 Courtesy of Unico Properties
Montgomery Park formerly housed Montgomery Ward's department store. It sits in Portland's Northwest District and is well-known as the home of the popular Adidas Employee store.

“Purchasing one of Portland’s landmark office properties in the Northwest district presents a unique opportunity to build and shape a premier neighborhood,” Unico Properties Executive Vice President of Real Estate Services Brian Pearce said in a statement. “With Montgomery Park’s size and scale, its abundance of development options and our vision to deliver unrivaled amenities, our goal is to help evolve this industrial district into a vibrant extension of Slabtown and ultimately, a live-work-play neighborhood.”

The area is poised for further development. The city of Portland is pursuing expansion of its streetcar system to the Northwest District. The adjacent 22-acre ESCO property was recently sold to Portland developers.

In December, Unico and Partners Group purchased the five-story, 195K SF Galleria office building in downtown Portland for $64.1M. Built in 1910, it was originally known as the Olds, Wortman & King department store. It spans a full city block directly on the MAX transit line at SW Ninth and Morrison. The Galleria is 46% leased to an 89K SF City Target store. There is 106K SF of available office space on the upper floors. Significant capital investment has been made to the office space since the purchase.

Both properties were acquired from the Bill Naito Co. CBRE’s Graham Taylor and Charles Safley represented the seller in both acquisitions. Acquisition financing was arranged by CBRE’s Nick Santangelo.