Ginger Bryant is chief operating officer and chief financial officer for Sares Regis Group of Northern California, which she joined in 1993. She is responsible for asset management of stabilized properties, finance, accounting and treasury functions and office operations. She previously worked with Prometheus Real Estate Group. Bryant is a past president of CREW San Francisco and the CREW Network and is a board member for Girl Scouts of Northern California. 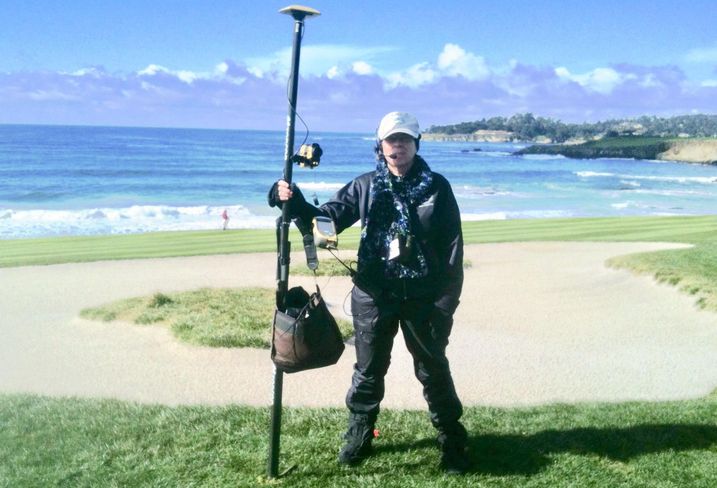 Courtesy of Ginger Bryant
Sares Regis' Ginger Bryant on the fairway of Hole 10 at Pebble Beach, where for the last nine years she has volunteered as a laser operator for the AT&T Pebble Beach Pro-Am golf tournament.

Bryant: As a partner, I sit on investment committees and approve projects and land for purchase. As a CFO, I’m in charge of all the capital for a project and its lenders and partners, and constantly monitor its performance and returns. And as a COO, I’m a strategic and financial planner for the company and make sure that our teams have all the right resources to be successful. I also head our compensation and benefits programs.

Bisnow: What accomplishment are you most proud of in your career and how did you achieve it?

Bryant: I am proud to see women I’ve mentored or worked with rise to leadership roles. I’ve always made time for women in our company, and I’ve been an active member of CREW since 1992. I’ve mentored many women in the Bay Area and across the country through CREW Network programs. Of special significance to me is a leadership program I co-created with five CREW Seattle members for their chapter. Over 60 women have graduated from that program, which earned the CREW Network Career Advancement for Women Impact Award. I strive to champion women in our company while mentoring and inspiring others. I can think of no better legacy than to watch their successes.

Bryant: The first steps I saw were when companies acknowledged the issue and the benefits of increased diversity and equitable compensation. Benchmarking research by CREW Network, starting in 2005, helped bring focus to the areas where women are succeeding and where we are lagging, as well as the compensation gap. Other CREW Network white papers have provided information to help tackle these issues. The most visible action companies have taken is the creation of women’s networks, which provide valuable resources, mentors and support for changes. This awareness then results in changes to compensation structures and the creation of systems that track and measure change within a company.

Bisnow: What piece of advice do you give others entering the industry?

Bryant: Be curious and never stop learning! And use every opportunity to build a network of business associates who are also friends where you can share information and get honest advice.

Bisnow: What do you do to unwind when you’re not working?

Bryant: When the weather is nice, I like to putter in my garden and tend to both flowers and veggies. When the weather doesn’t cooperate, it’s time to curl up with the cats on my lap and a good book.