Almost universally, the Bay Area's most prominent women involved in commercial real estate say the most important career advocate a woman can have is herself — and from there it is essential to have other champions as well.

"It's not necessarily your supervisor's job to know when you're ready or when you want something," Neff said in a panel focused on recruitment.

Kilroy's senior vice president said she needed to be reminded by her colleagues to communicate to her supervisor she felt she was ready for the position and promotion to vice president.

Neff also cited the idea of "Tiara Syndrome" (a concept coined by Carol Frohlinger and Deborah Kolb, the founders of Negotiating Women Inc.), saying "women tend to walk around waiting for somebody to place a tiara on their heads, but you have to ask for your own tiara."

For Schaaf, the realization came when she began her first mayoral campaign.

"The best piece of advice I got [when considering whether to run for office] was: 'If you want to be a leader, do not ask for permission from anybody else.'"

Likewise, Andrea Reeder, Nuveen Real Estate's director of office asset management, said advocacy, sourced both internally and externally, was pivotal early in her career. She extolled a male mentor who encouraged her during her formative days doing brokerage for Sunset Development Co.

"He advocated for me, but more importantly he taught me how to advocate for myself," Reeder said.

Reeder and other panelists, like Kristina Owyoung Vinson, Pankow's senior director of people, culture and communications, pointed to network-building as another crucial ingredient to their CRE success. Both are longtime members of CREW, a 12,000-member, worldwide network of women in the industry.

"CREW was an organization that I really wanted to seek out when I was a younger female leader at my company and often the only female in the room," Vinson said.

"I can personally attest to [CREW]. That has been the bedrock of my commercial real estate career," Reeder said, adding that she once served as president of the organization's East Bay chapter.

On top of championing oneself, several of event's honorees called for the need for mentors and sponsors — two distinct roles, Reeder said.

"Everyone knows you need a mentor, but what you really need is a sponsor, which is someone within your company."

"Finding an ally in the workplace, whether it be an ally or just a sponsor, to speak towards your accomplishments goes a really long way," Vinson said.

Neff said office politics often necessitate a sponsor, or someone vocally in your corner when the time comes.

"When you recognize there's something you want but it's not clear how anybody gets it, that's the time to activate your sponsor, because office politics decide who gets what," she said.

"Advancing professionally is really tied to having access to information," Silberberg said.

"Women are often not good at asking for money," Iron Construction co-founder and Chief Operating Officer Claudia Folzman said. "I notice when I'm hiring that we don't ask for as much as we should."

To Kilroy Realty Vice President of Asset Management Eileen Kong, who gave the event's welcoming remarks, the gathering itself was a form of activism within an industry in which women are still underrepresented, despite the fact women comprise 57% of college undergraduates.

"This underrepresentation is why we need to celebrate women's successes," Kong said.

"Until the day that 'powerful women' is as synonymous as 'powerful men,' we need to remind ourselves and others that women are capable, well-connected, strategic, visionary and powerful."

Click below to see a slideshow from the event: 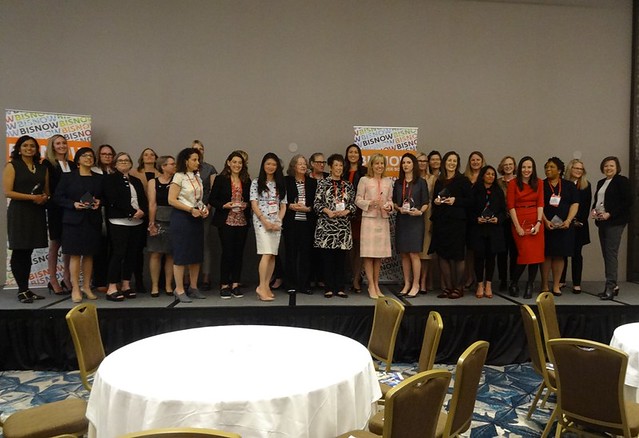