Twitter may be allowing all its employees to work from home forever, but it doesn't have any plans to reduce its office footprint, the company told Bisnow Thursday.

The company at the vanguard of the revitalization of San Francisco’s Mid-Market neighborhood will likely have fewer employees in the neighborhood once its offices reopen. 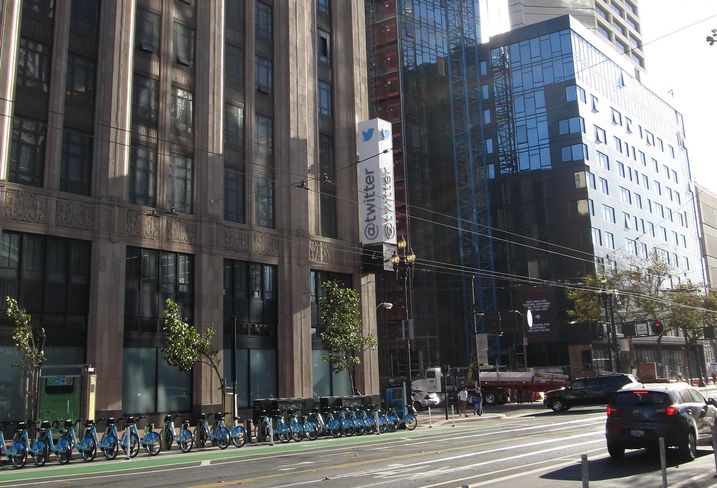 Ken Lund/Flickr
Twitter's headquarters at San Francisco's 1355 Market St., where it said it has no plans to vacate.

Twitter's corporate headquarters consists of about 800K SF at 1355 Market St., or about half of its total 1.6M SF global office footprint. The entire Mid-Market neighborhood had a hair under 2.5M SF of office inventory as of Q1, according to JLL. San Francisco city officials have made keeping Twitter’s presence in the neighborhood a priority.

It was unclear as of press time when Twitter’s lease on Market Street expires. Real estate investment company Shorenstein, which owns 1355 Market St., declined to comment.

On Tuesday, Twitter confirmed it will allow all employees who want to work from home full time to do so permanently, becoming the latest global company to embrace remote work during the coronavirus pandemic.

At the beginning of March, the San Francisco-based social media platform made headlines as one of the first companies to have its 5,000 employees work from home in response to the coronavirus outbreak.

"We were uniquely positioned to respond quickly and allow folks to work from home, given our emphasis on decentralization and supporting a distributed workforce capable of working from anywhere," the company wrote in a blog post announcing its updated policy.

"The past few months have proven we can make that work. So if our employees are in a role and situation that enables them to work from home, and they want to continue to do so forever, we will make that happen," it reads. "Opening offices will be our decision, when and if our employees come back, will be theirs."

Twitter, which has called S.F. home since its founding, opened its headquarters at 1355 Market St. in 2011 when the city coaxed it to the Mid-Market neighborhood with a payroll tax exemption colloquially known as the "Twitter Tax Break."

Starting that same year, companies that located offices in the struggling neighborhood received an exemption on the city's 1.5% payroll tax. The incentive expired last year, saving businesses that used it a combined $70.1M over its lifetime, Bloomberg reported.

Though several other marquee companies, including Uber and Dolby Laboratories, followed, office developments in Mid-Market met with various success rates, particularly as crime, open-air drug use and unsanitary street conditions have persisted in the area.

Now, Twitter's future there, and at its 35 or so other global offices, seems more uncertain. The shift to flexible work raises questions about its office footprint, despite its confirmation that it plans to occupy the same amount of space. Many of its employees will likely still want to work out of its offices.

Even so, Mid-Market's office market could have a precarious few months, Kidder Mathews First Vice President Blake Lugar said. Lugar said the pandemic might lead to a flight to quality office product, especially when it comes to location and proximity to transit. Properties in more tertiary markets might see some demand sapped, he said.

“Those are the types of buildings that are going to feel the brunt of the fallout here," Lugar said.

Shorenstein originally leased the space to Twitter in 2012 for an average rate of $25 per SF over the first six years, with the tech company since expanding both in the building and next door at 1 10th St.

Similarly, fellow Mid-Market arrival Zendesk paid an average asking rent of $25.60 per SF in the first three years of its lease starting in 2011. In 2013, it signed a five-year extension starting in 2014 and with an average rate of $55.21 per SF.

Direct average asking rents per SF in Mid-Market climbed about 14% year-over-year to $88.17 per SF in Q1 this year, according to JLL.

Lugar said he doesn't see a shift toward working from home as an imminent threat to offices.

“For Twitter, I don’t think it’s necessarily a suggestion of a huge shift, people working from home and people in the office," he said. “I think a lot of people love the option of working from home, but a majority of the people I talk to want the office environment.”