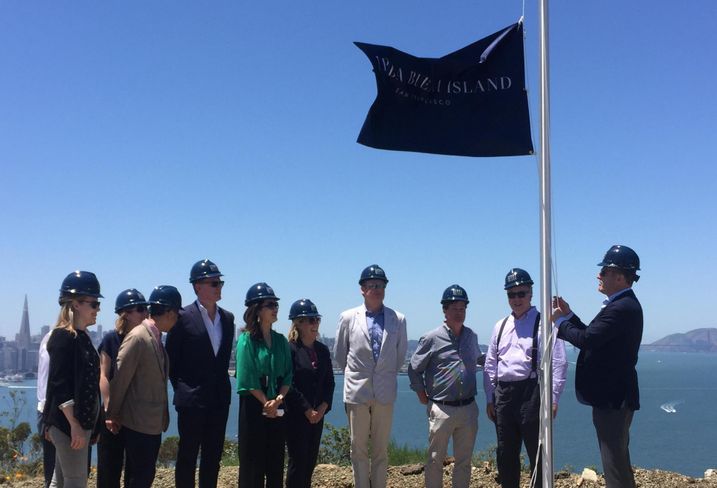 Construction on the first set of 8,000 homes slated for San Francisco’s Treasure Island and neighboring Yerba Buena Island has begun.

Connected by causeway to the larger Treasure Island, Yerba Buena Island will soon hold a community of 266 luxury residences, with the first 124 in a condominium building called The Bristol and scheduled to open in April or May 2021.

The rest, Wilson Meany partner Chris Meany said, will be a mix of flats and townhomes his team expects to complete at around the same time. Development partners Wilson Meany and Stockbridge Capital gathered Tuesday afternoon to celebrate the condominium project starting vertical construction.

“The other buildings take less time, so we’ll be starting a big chunk of the rest of the buildings at the end of this year,” Meany told Bisnow.

“When we open in the spring of 2021, we’re going to have condominiums, cliff-side townhomes and small boutique buildings with 2,500 SF to 3,500 SF flats in seven-unit buildings,” he said.

Residents of the 266 units will have access to an amenity package focused on wellness that includes a fitness studio, an outdoor lap pool, a spa and a game room, among other perks, and 75% of Yerba Buena Island is being preserved for open space.

“To be able to afford to do the affordable housing and the parks, we need to have market-rate developments like this because it’s what subsidizes it,” Tsen said.

In addition to three hotels, 100K SF of office space and 235K SF of retail, the master plan for the two-decade project calls for up to 2,000 affordable homes, or 25% of the total, once the development team of Lennar, Wilson Meany, Stockbridge Capital Group and Kenwood Investments finish construction there. The project will cost a reported $5B.

With the first batch of homes in the master plan underway, the next to break ground will be an affordable housing project on Treasure Island, Tsen said. Nonprofit Swords to Plowshares and the Chinatown Community Development Center will begin construction on a five-story affordable development next year.

Meany didn’t disclose the cost of development at Yerba Buena nor the expected price for the residences but did say the project is one of the most expensive undertaken in the area and that prices would reflect the San Francisco market for luxury residences. Meany said he expects the majority of buyers at Yerba Buena to come from San Francisco, where they will have a home close to the rest of the city, but focused on wellness and surrounded by preserved open space, including a 6-acre park.

“We have the opportunity to create a limited number of homes here, but those homes really are unique because we think they establish a new way to live in San Francisco,” Meany said.

Sales of the condos will begin in early 2020.