In 2014, Robert A.M. Stern Architects and Grosvenor Americas' task of bringing Nob Hill its first multifamily building in decades might have seemed as steep as the ground on which it now sits at 875 California St.

"This is really the Rocky Mountain section of San Francisco," Stern said while overlooking the upper class, fittingly hilly neighborhood. 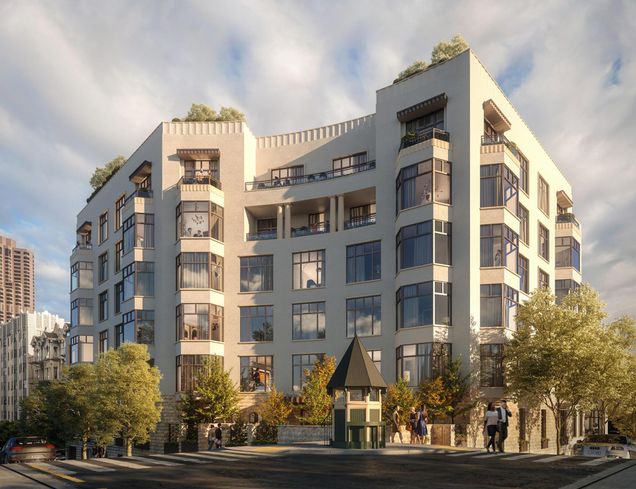 But there at the corner of California and Powell it now (mostly) sits. After receiving Planning Commission approval in 2016, the 44-unit luxury condominium building known as Crescent will begin move-ins in early 2020, bringing Nob Hill a rare batch of new housing inventory.

Grosvenor, which acquired the land for $15M in 2014 from the Stanford Court hotel, found the sell to planning commissioners and community members considerably easier thanks to the designs of RAMSA, according to Grosvenor Senior Vice President Steve Buster.

"This is why we brought Robert A.M. Stern Architects on board," Buster said at an event celebrating the project. "They put this amount of thought in, and that's why we had support from the Nob Hill Neighborhood Association and were unanimously approved at the Planning Commission."

In addition, the building, which has 31 two-bedrooms along with a mix of studios, one-bedrooms and three-bedrooms, is a true hybrid of RAMSA's architectural philosophy and San Francisco's own unique characteristics, according to RAMSA principal Dan Lobitz.

"So many architects have an idea of one-size-fits-all architecture," Lobitz said. "We feel it's important to look very closely at the texture and character of the buildings wherever we're working. We can both make a statement and also enter into a conversation with the neighbors, as opposed to screaming, 'I'm new.'"

Such an approach was especially necessary given the particular site in Nob Hill, RAMSA's partners felt. Nearby residents had grown accustomed to the surface parking there since the 1970s, and the team had to incorporate Crescent into a parcel with "quite strong neighbors," Lobitz said, referring to the Stanford Court hotel across Powell Street, the University Club across California Street and the Hotel Fairmont directly across both. 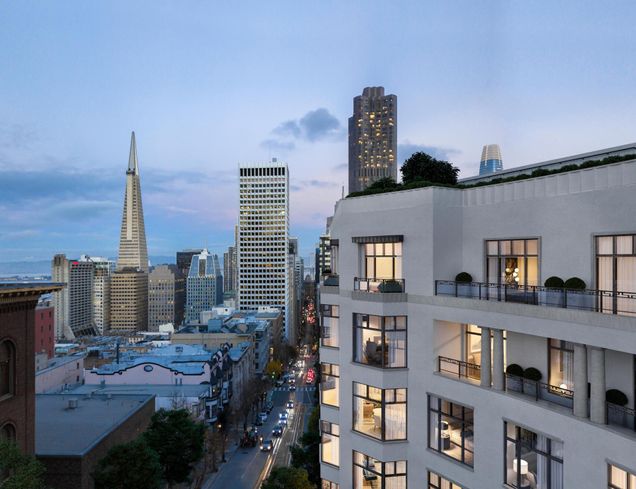 Courtesy of Binyan Studios
Looking down California from Crescent

Even more immediately, the site also fronts a tiny kiosk-like structure from which an SFMTA employee directs cable car traffic, further complicating demands but also providing RAMSA with an opportunity.

"We think one of the most important things about the Crescent building is this curved corner which creates this garden plaza and is so much like the corner of the [InterContinental] Mark Hopkins Hotel or the Brocklebank Apartments," Stern said. "It almost makes a bit of an icon out of the little structure in which someone sits and negotiates the crossing of the cable cars."

Residents at Crescent will enjoy an amenity package similar to what guests at the neighboring hotels do: a 24-hour attendant, a two-story drawing room, rooftop gardens and outdoor terraces overlooking gardens designed by San Francisco-based Miller Company Landscape Architects.

A designer of other, much larger notable residential buildings like New York's 15 Central Park West and The Century in LA, Stern, who is also working with Grosvenor Americas and TMG Partners on their 273-unit Presidio Heights project, likes how 875 California is taking shape.

"We think it fits in. We spent a lot of time on the windows, keeping the metalwork very thin, which is costly, as our clients remind us regularly," Stern said.

Grosvenor Americas, which has assets under management of $3.8B, seems to like what they have done with the place as well.

"You don't get opportunities like this very often," Buster said. "This is a special location."