A 427-unit San Bruno housing project felled by a single vote last year has been put back on the table by one half of its original development team. 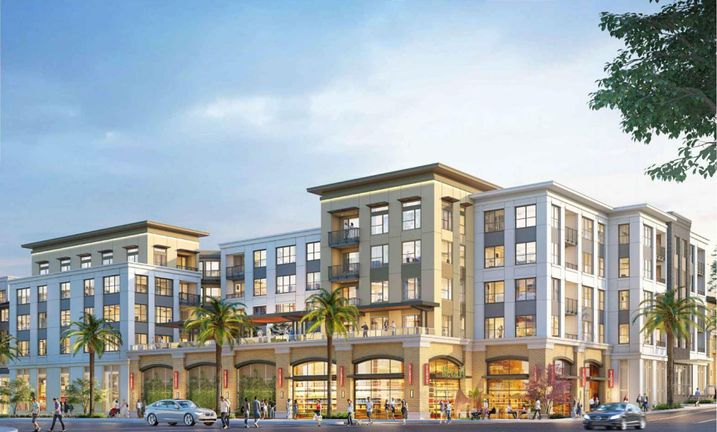 KTGY
A project rendering of G.W. Williams Co.'s plans for over 400 units in San Bruno, Calif.

The project proposal is now back in much the same form and city officials have said it is likely to pass, the San Francisco Chronicle reports. Last August, the state Department of Housing and Community Development said the city's rejection may violate California law, given the project's compliance with San Bruno's general plan, zoning and design review standards.

Resubmitted in March, plans have long called for a project to rise on an open site adjacent to Mills Park Shopping Center along El Camino Real, but matters came to a head in July when City Council member Marty Medina cast a lone no vote, rejecting the proposal.

The circumstances themselves were atypical: Two of San Bruno's five council members recused themselves for living within 1,000 feet of the project site, leaving one no vote enough to stymie the project. But housing advocates flagged the end result as an all-too-typical example of Bay Area housing politics.

Changes to project specifics include two additional residential units as well as the nixing of plans for a Whole Foods on the ground floor, according to G.W. Williams Co. Vice President Sean Williams.

"We lost Whole Foods because after we got the no vote last July, they didn't want to wait around, which is disappointing because that would have been a really nice use for that community," Williams said.

In addition, the team behind the project this time does not include Oakland-based developer Signature Development Group.

Signature, which is the lead developer of its home city's Brooklyn Basin megaproject, confirmed to Bisnow it is no longer behind the Mills Park project, but declined to go into further detail about the change.

Current plans include two mixed-use buildings of up to five stories, with 65 of the 427 units, or about 15%, reserved for very low to moderate-level incomes. The ground-floor commercial space does not yet have a designated use.

The proposal should go before the city council in the next few weeks, according to Williams, who said the need for the project and others like it is still fairly evident.

"I would be surprised if it doesn't pass at this point," Williams said. "But I kind of was surprised last July as well, so anything can happen. [The project] just makes sense in this environment where we have a housing crisis."