On a recent Friday, Rose Mark and a friend started cooking dinner mid-morning. She would need to make enough lasagna to feed dozens of people by the evening.

Twice a week, community members at Phoenix Commons in Oakland make dinner for each other, but this Friday dinner was special. Mark was celebrating the two-year anniversary of the opening of Phoenix Commons, a four-story, 41-unit senior co-housing facility along the Oakland estuary near the Park Street Bridge. 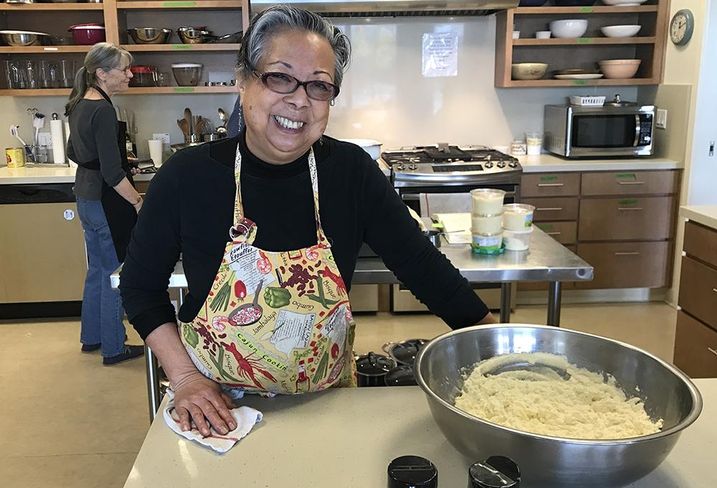 Mark, a writer, and her husband have been involved with the AEC Living-owned building since before the building’s foundation was poured. Three years ago, she and her husband wanted to sell their Oakland home and move into communal housing to stay close to their kids. She ended up connecting with developer AEC Living and was part of the planning process.

“We wanted to live independent as long as we could,” she said.

Shared living is becoming increasingly popular not just in the Bay Area, but around the country as people turn to it as not only a more affordable option to renting or buying a home, but to be a part of a community. 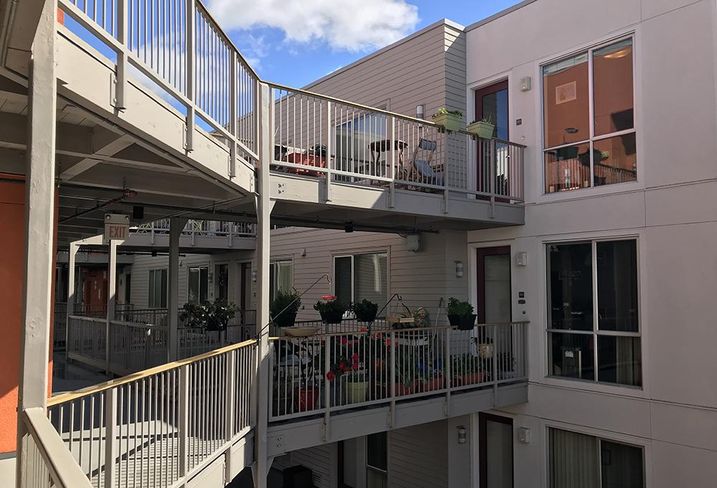 The biggest draw of Phoenix Commons is the sense of camaraderie, Mark said. If someone is sick, everyone comes together to help care for that person. One resident was badly injured after a car accident and everyone signed up and took shifts to get the resident back on his feet. He was so well taken care of by the community members that his family and friends never needed to come and take care of him, she said.

“We are independent people, but sometimes life gets in the way,” Mark said. “Sometimes you need help and it’s there. We check on each other.”

Shared living comes in many forms. Co-housing, such as at Phoenix Commons, typically refers to privately owned units with shared communal areas. These communities are typically overseen by a homeowners association and residents are often required to be involved in the community.

Co-living involves a community of like-minded individuals, oftentimes young professionals, who have shared or private rooms and large communal kitchen and amenity spaces. Iterations of co-living include WeLive, WeWork’s co-living concept, Ollie, Common and most recently Starcity, which opened locations in San Francisco within the last few months. Other shared living examples include college dorms, which are strictly for students.

Shared-housing concepts are nothing new. In the late 1800s, people would rent rooms at boarding houses or at YMCAs, according to Studio One Eleven senior principal Michael Bohn. This concept faded out of style after the 1920s, but came back in the 1960s as part of the bohemian lifestyle and the anti-establishment movement. Bohn said in the ’60s the choice was more cultural whereas the resurgence today is more out of a need by professionals to live in certain neighborhoods more affordably.

“We’re in an affordable housing crisis, mostly in the coastal communities and large urban areas,” he said. “We’re starting to see a lot of young folks leaving those areas because of the cost of living, and yet that is where many of our best jobs are.” 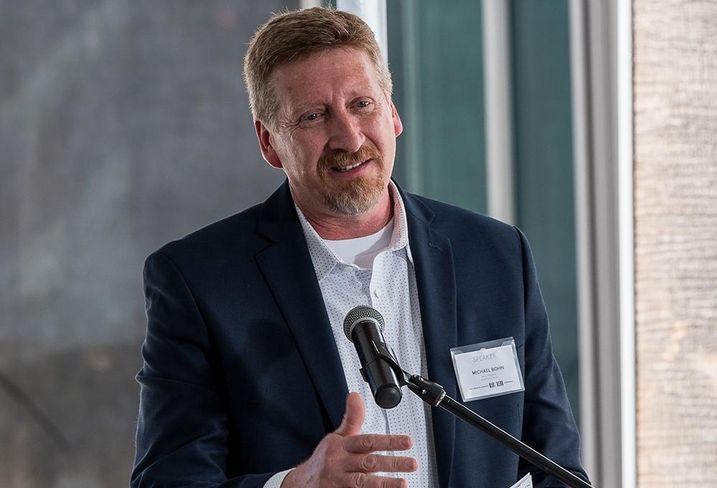 Co-living is offering a way for young professionals to live near their jobs at rents that are lower than the average without having to deal with many of the negative issues related to finding and living with roommates, according to Bohn.

“It gives you a chance to meet people in a more conventional fashion and establish some roots in a community,” Bohn said.

The units are often furnished and include common areas and amenities maintained by property management. Residents pay a single cost per month and do not have to pay for individual utilities, he said.

The recent resurgence of shared housing originally started in Europe. It moved into New York City within the last decade and has had a high success rate with hundreds of applicants for each room, he said. In the last few years, it has grown in popularity in California as the cost of housing has hit a tipping point, according to Bohn. Co-living and co-housing present long-term viable alternatives for future residents, he said.

Building A Community Of Professionals 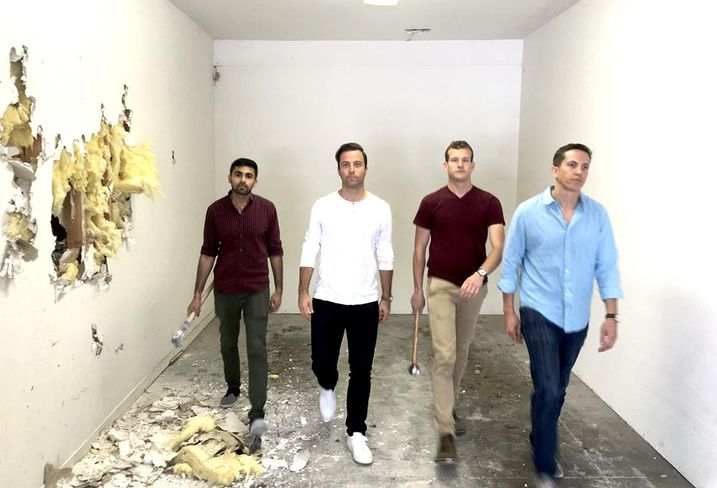 Starcity takes a slightly different approach to typical co-living. The company converts underutilized commercial buildings into shared housing where resident members rent a single room for about $2K/month and share large community spaces, bathrooms and amenities throughout the building.

Part of Starcity CEO and co-founder Jon Dishotsky’s motivation to start the company was to bring people closer to places of opportunity.

He said when his parents moved to the Bay Area from the East Coast, they had only a few dollars in their pockets and settled in Palo Alto decades before the tech boom. They were able to make ends meet, but now it is much more difficult for young people to get a fresh start in the Bay Area.

“I’ve seen that whole concept erode,” Dishotsky said. “That opportunity is really out of reach for so many people.”

Dishotsky, a former broker at Cushman & Wakefield, said he spent a decade working with startups to help them grow locally and internationally and soon realized these startups did not have many places for their employees to live. He toured all these giant commercial buildings that had millions of underutilized square feet that could be used for other purposes.

He said what his company has created is a new asset class, which did not go over well with lenders.

“Lenders laughed us out of their office,” Dishotsky said. 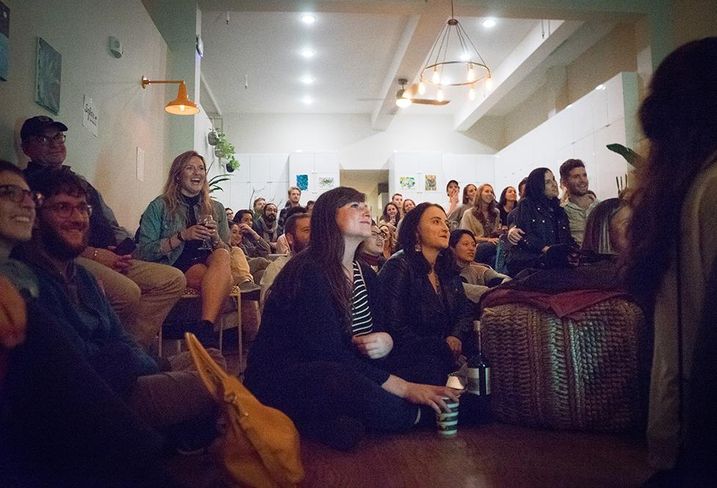 Starcity turned to venture capital and began acquiring vacant buildings to renovate and turn into Starcity residences. So far, the company has converted hotels and commercial buildings into usable living spaces, but the company may eventually work on transforming vacant retail spaces and garages.

Much like Phoenix Commons, Starcity stresses the importance of community and providing activities when people want to participate. Each location has a large communal kitchen as well as places to hang out, but also a private furnished unit where people can be when they do not want to socialize, according to Dishotsky.

Each building has quiet hours and the eventual goal is to place professionals who keep similar hours near each other so someone who has to wake up early is not near someone who comes home late at night, Dishotsky said.

Starcity’s plan is to create density with 30 locations. It is launching pilot locations in Silicon Valley, Los Angeles and New York by the end of the year. Regional density will allow for the creation of a broader network of member residents.

“In 10 years I’d like for anybody who wants to [to be able to] move to San Francisco and make a life for themselves,” he said. “People will have a hope to move here whereas now people are losing hope.”

Not Your Average Senior Community 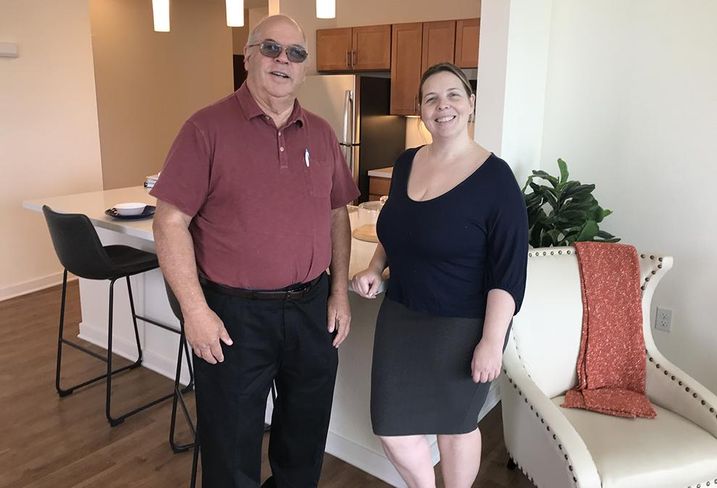 While much of the focus of shared living has been on appealing to young professionals, Studio One Eleven’s Bohn said there are untapped markets of immigrant groups and seniors. Co-housing for seniors is a new concept in senior housing and only about a dozen exist nationwide, according to Berkeleyside.

AEC Living CEO Lauren Zimmerman Cook said the concept of co-housing came about after her father and company founder Chris Zimmerman wanted a place for himself and his wife, Darnelle Zimmerman, who is chief nursing officer at AEC Living, to retire after 50 years in developing senior care facilities.

“He wants to have more independence,” Zimmerman Cook said. “Baby boomers don’t want to age like their parents did.”

At Phoenix Commons, residents own their condo-style units. They pay HOA fees that go toward a budget shared by the entire community. The 55+ community offers condos ranging from about $520K to $730K for one- and two-bedroom units.

Many residents, such as Rose Marks and her husband, sold their two- or three-bedroom houses and chose co-housing as an option to downsize. While many residents are retired, others still work and many are artists and writers, Zimmerman Cook said. 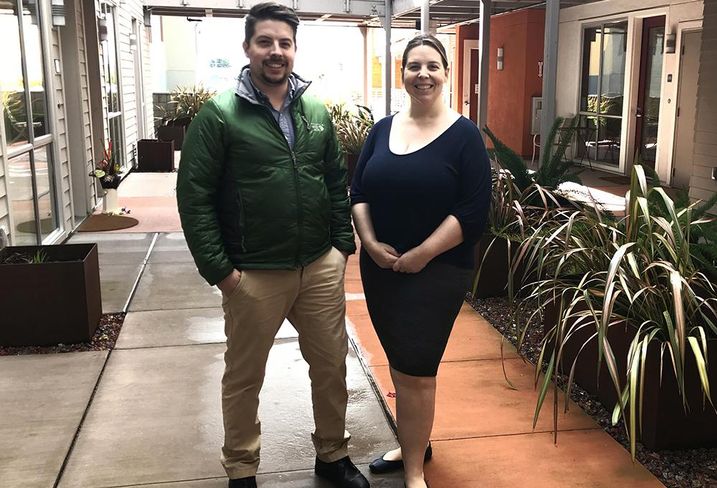 Co-housing is made of two parts: the building and the people who want to interact, Zimmerman Cook said. She said one of the best ways residents can interact is through community meals, which are offered twice a week at a cost of $6/person. Money collected goes back into the shared pantry fund.

Zimmerman Cook said co-housing is not for everyone and is best for people who are active and want to plan and participate in social activities. Residents are very involved on committees and have a say in how the community budget is spent, Zimmerman Cook said. A committee also interviews potential residents to make sure they are a good fit.

The building is adaptable to meet the changing needs of residents, Zimmerman Cook said. The fitness room could later be converted into a Medicare-approved clinic and amenity rooms, which provide space for writing, meditation and crafting, and could be used for other purposes.

Other amenities include a swim spa, a private dock along the Oakland estuary, a library where residents can share their own books with others, a community room with a piano, a TV room and a guest suite that can be rented for up to 17 days per year. The community is close to downtown Alameda and a BART station.

The biggest amenity is the community itself; no one feels lonely and everyone takes care of each other. Residents have helped each other through illness, death of a loved one, injury and other life challenges.