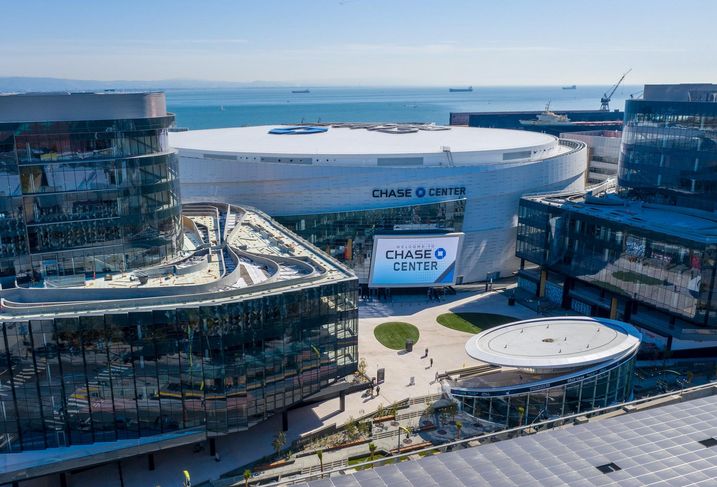 Courtesy of Droneshot
Chase Center a month after its September opening.

On Tuesday, the Warriors secured final approval from San Francisco's Board of Supervisors to build a 13-story condo and hotel mixed-use project next to their home arena. Plans call for a 129-room hotel, 21 condos and up to 25K SF of retail space in a mid-rise next to the NBA team's new Chase Center arena.

The team said last year that the hotel portion will be branded under the 1 Hotels flag and operated by SH Hotels & Resorts, an affiliate of Greenwich, Connecticut-based investment firm Starwood Capital Group.

"This hotel will help fill a current need in the neighborhood for more hotel rooms, and it’s something UCSF and other surrounding businesses are clamoring for," Warriors spokesperson P.J. Johnston said in an email.

"Just as importantly, as San Francisco looks to rebound from the pandemic, the hotel will provide funding for affordable housing, good union construction jobs on the front end and good Local 2 hospitality jobs on the back end and into the future."

Tuesday's approval is the latest of a series of milestones for the Warriors in Mission Bay. The organization officially opened its privately financed, $1.4B arena last year, about four years after acquiring the site from tech giant Salesforce, and partnered with Alexandria Real Estate Equities and Uber on the latter's new office buildings next to Chase Center.

The group secured $600M in CMBS debt to refinance the two office buildings in May, according to Fitch Ratings. That loan refinanced about $315M of existing debt.

In addition to the hotel, residential and retail components, the plans call for meeting and ballroom facilities and a spa and fitness center. The Gensler-designed building will be 255K SF, LEED Gold-targeted and rise on the northeast corner of Chase Center.

The Warriors, who have JLL has a development partner on the project, haven't said when they hope to start construction.

"Nobody knows exactly what the world will look like next week, next month or next quarter, but the Warriors intend to be an important part of this community’s economic recovery," Johnston said.