Waterfront Megaproject Prepares For Next Phase

With entitlements secured last month, a multi-decade project poised to bring San Francisco 2,600 units could begin construction in a number of months. 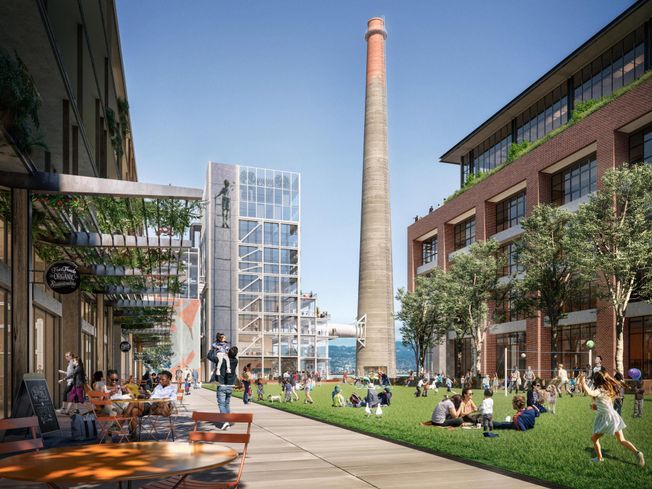 Courtesy of Perkins and Will
A rendering of developer Associate Capital's plans for Potrero Power Station.

Project designs call for 2,600 homes, at least 780 of which will be affordable, in a mix of uses meant to create a complete community in S.F.'s southeastern quadrant, according to Geeti Silwal, urban planner and principal at Perkins and Will, which led design planning for Associate Capital.

“It’s been a very thoughtful and intentional plan for a mix of uses," Silwal told Bisnow. “It’s an opportunity to see how neighborhoods can be planned and developed to be complete communities.”

Plans for Potrero Power Station represent a far cry from its long industrial past, which hit a crossroads when S.F. decided to close the power plant in 2010 to eventually make way for housing. Associate Capital became interested in 2016, seeing a rare privately owned waterfront site in S.F. and an opportunity for a huge project, Landa said.

A group led by Associate Capital (and including then-CEO of Hewlett Packard Meg Whitman) bought the site that year for $86M, according to county property records.

In addition to 2,600 residential units, the developer's plans also call for 1.5M SF of office and life sciences space and 7 acres of parks and open space, as well as other features reflecting community input. A hotel with as many as 250 rooms will be fashioned out of adaptive reuse of Unit 3, an existing power station.

Courtesy of Perkins and Will
A rendering of Associate Capital's Potrero Power Station project.

The 300-foot-tall smokestack nearby residents preferred stay will stay as well.

Landa said Associate Capital followed the "gold standard of outreach" put forth by the Brookfield Properties' team leading the development of Pier 70, another massive project just half a mile north of Potrero Power Station.

Between Associate Capital's project and Pier 70, as well as other big projects to the south like India Basin, S.F. Shipyard and Candlestick Point redevelopment, developers have combined plans for well over 10,000 homes in the southeastern part of S.F.

Like nearby developments, Associate Capital's was planned during a much different economy, but Landa said the developer is still nearly ready to get started.

“This is a multi-decade project, and we always envisioned there’d be a recession at some point," Landa said. "We didn’t expect it out of the gate, but our team is focused on implementation and beginning the hard work to make the site ready to develop office, housing, life science and community facilities.”