Brookfield Properties' long-delayed plans for over 800 new homes, a 640K SF office building and about 50K SF of open space and parks in San Francisco's South of Market district are now a crucial step closer to reality.

Brookfield and partner Hearst Corp. have begun construction on their 4-acre mixed-use project known as 5M (for Fifth and Mission streets), with its Phase 1 set to feature a 302-unit apartment building at 434 Minna St. and the 395-foot-high, 640K SF office tower. The residential building in the first phase will include 91 units of affordable housing, an element that nudged Brookfield over a crucial hump in 2015.

Project plans were filed back in 2011 but needed a late-night deal in 2015 between Mayor Ed Lee, Supervisor Jane Kim and Forest City (since purchased by Brookfield Properties) that involved developers agreeing to more affordable housing, the San Francisco Business Times reported at the time.

The result is 245 units (of a projected 856 for the development) being reserved for middle-income households, seniors and formerly homeless families.

Even after approval, the project endured a delay of more than three years due to a lawsuit filed in 2015. Community neighbors claimed the environmental review for the project was inadequate, but their appeal was rejected by the 1st District Court of Appeal in March.

"We cannot continue to wait years for projects with much-needed housing like 5M to move forward," San Francisco Mayor London Breed said in a statement. "We will continue working tirelessly to bring affordable housing, cultural programming, and open spaces for families and kids to all our neighborhoods so that all San Franciscans enjoy the benefits of a vibrant and close-knit community.”

While Brookfield and Hearst expect the first residential building and 415 Natoma office tower to open in 2021, a timeline for the subsequent phases of the project has not been set. Hearst has plans to renovate its historic Chronicle building on the site, including adding a 22K SF public rooftop park, as well as designs on an already approved 400-unit condominium building on Fifth and Minna streets.

On the same block, Brookfield will build 83 units of senior housing at 967 Mission St. Nearby, the developer will build 71 units of family housing at 168 Eddy St., with 19 of those homes reserved for formerly homeless families.

"5M is the next generation of mixed-use urban projects,” Brookfield Properties Vice President Jason Bonnet said in a prepared statement.

SITELAB urban studio designed the master plan for the project.

The project will include $76M in public benefits funded by Brookfield and Hearst, leading to the renovations of three historic buildings within the 4-acre site bounded by Mission, Fifth and Howard streets. In addition to the Chronicle building, the nearby Camellia and Dempster Buildings will be redeveloped for arts and retail uses.

Click below to view a slideshow of the most recent renderings for the project: 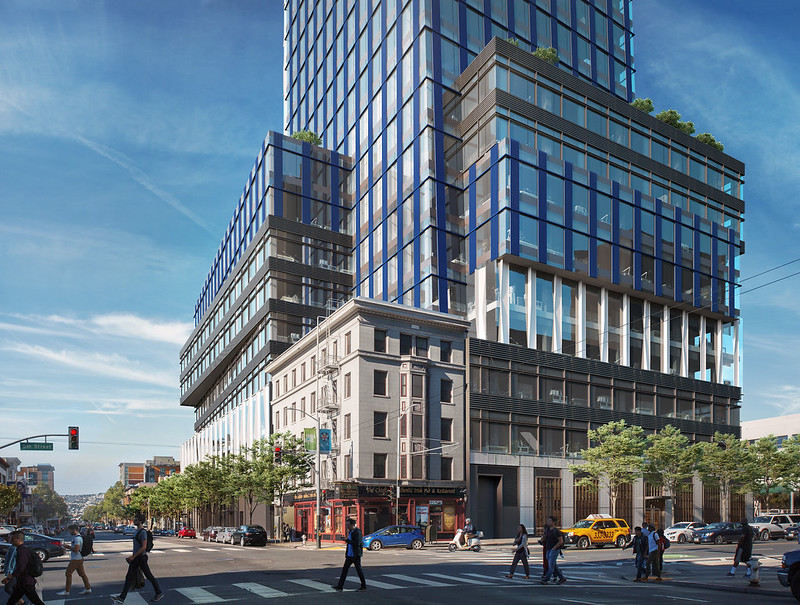