The founders of Tempo Automation had a challenge in front of them last year. Capacity-constrained by an 8K SF factory in San Francisco's Dogpatch, the startup needed something triple that size, ideally in San Francisco.

Eventually, after nearly settling for a new home down the Peninsula in Brisbane, Tempo, which makes printed circuit boards, heard about a new opening in the Mission District and moved quickly.

"It was really tricky to find the right space, and it took a while," Tempo Automation co-founder and Vice President of Technology Jesse Koenig said. "We heard about this one off the market through a tip and snapped it up."

Tempo's business hadn't given its executive team much of a choice. Founded in 2013, Tempo does "software-accelerated" PCB assembly for companies in industries ranging from aerospace to tech, and from quantities ranging from one to 1,000, or prototyping to low-volume production.

Its growth necessitated more space. Tempo was drawn to a Mission/Design District area of S.F. that has seen a recent flow of investor and tenant interest.

"There's definitely institutional interest, both local and from out of town, bullish on continued growth and demand in [the Design District] area," Kidder Mathews Senior Vice President Evan Housel told Bisnow. "It's the last area of the city where you've got the confluence of relatively large blocks of space located close enough to public transportation and where a lot of high-tech employees are living."

Learning from its several sites prior, Tempo, which now counts almost 150 employees, planned accordingly at 2460 Alameda St., where it is in the process of doubling its production capacity from three lines to six.

"We have enough space here to do that," Tempo Vice President of Marketing Brady O. Bruce said. "Part of the attraction of the space was it had the potential to grow our production capacity natively."

Formerly occupied by clothing manufacturer and building owner Byer California, which still occupies half of the building, 2460 Alameda St. offered Tempo proximity to Bay Area tech talent and much of its customer base. For instance, medical equipment manufacturer Spire Health, one of Tempo's customers, is located just a few blocks away.

"It's a high priority for us to have access to the world's best software engineers, and there's a lot of energy in the tech industry here in S.F," Koenig said.

It also offered Tempo something less expensive than $60 or $70 per SF, which Koenig said would have been too much, especially given the manufacturer's build-out needs. Rent for San Francisco industrial space in Q2 of this year averaged $33.72 per SF, with a vacancy rate of 2.5% and continued positive absorption, according to Kidder Mathews.

But like the shell Tempo walked into last year, much of that space is far from the highly finished PDR space desired by newer tenants. Those finished spaces befitting a high-tech user have rents falling in the $50s and $60s per SF, compared to conventional industrial space falling in the high $20s to $30s, Housel said.

"We put so much in to build it out that it kind of evens out with the low rent, and we maybe break even," Koenig said. "There was no HVAC, no conference rooms, no kitchen."

Commercial Construction & Improvements Inc. led construction, while Costa Brown Architecture led design. You can see the finished product in the slideshow below.

Tempo would not provide rent or build-out figures.

Koenig says Tempo, which also has Lockheed Martin, GE Healthcare and NASA's Mars 2020 mission on its list of customers, has options to expand an additional 12K SF at its current factory, but that it will likely look to the South Bay for another big expansion late next year.

"I can easily imagine a Tempo San Francisco and a Tempo South Bay," he said. "Then some people, like software engineers, might be able to choose where to work."

Moreover, remaining space in the Mission and Design Districts are increasingly hard to come by.

"There's a dwindling number of high-end PDR spaces and a general strong demand from growing high-tech PDR tenants," Housel said. "We'll see what shakes out in the next year and who snaps up the remaining spaces but there aren't many left." 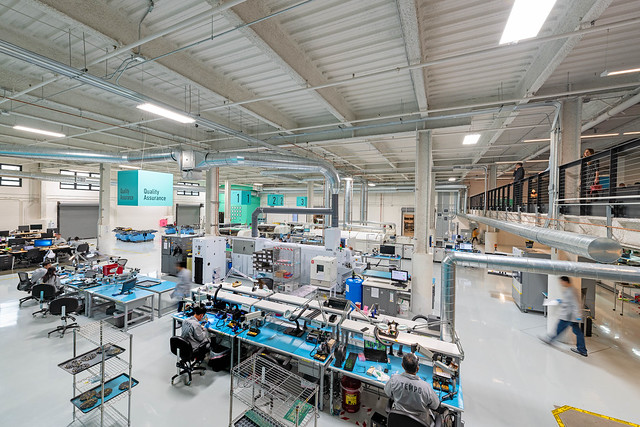