Renovations are breathing new life into San Francisco’s older boutique hotels. The new designs incorporate modern design and high-end finishes and expand services such as a larger fitness center, more lobby seating, and technology such as keyless entry and high-speed internet. Many of these new features will make these boutique hotels more competitive against Airbnb accommodations.

Check out some of the most recently completed renovations and ones underway. 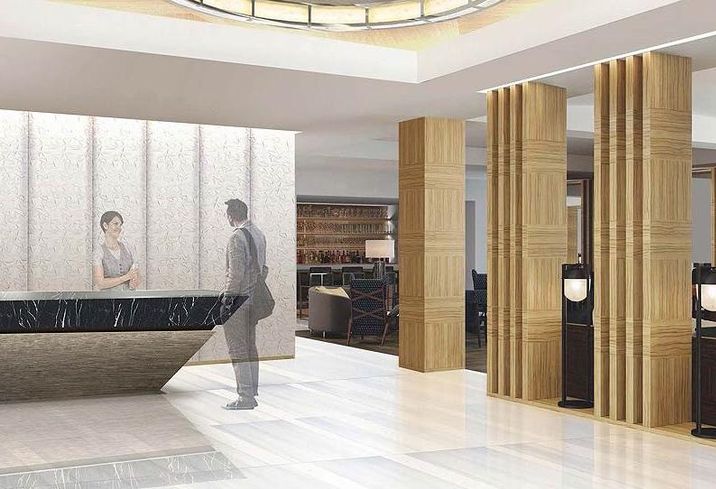 The 221-room hotel’s new design was inspired by Mediterranean yachts and exotic ports. Guest rooms include yacht-style finishing. The renovation also includes a new design for the lobby and the full-service bar. The event and meeting space were redone with modern décor and new fixtures. Hotel Zoe also includes a sculpture designed and created by Shawn Man Roland. Pebblebrook Hotel Trust owns the property, and Nobel House Hotel and Resorts manages it. 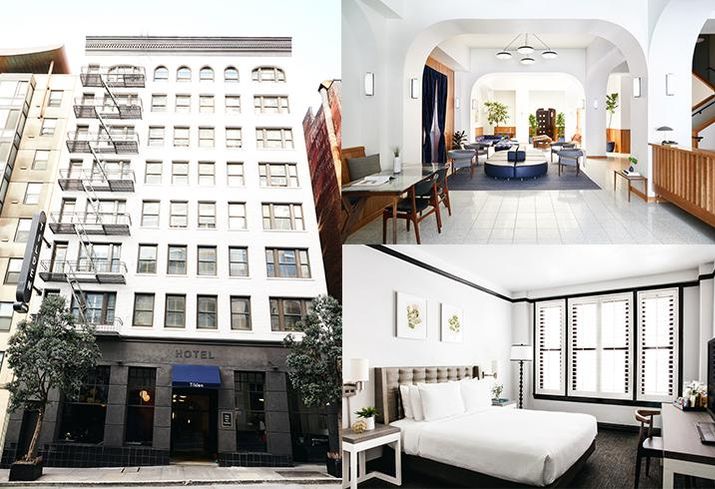 The overarching theme of the design is organic textures and colors, clean lines and airy, well-lit spaces. The guest rooms offer a simple and serene design. The exterior was freshly painted and consists of a black tile base at lobby level and a white exterior.

The Hotel Mark Twain began operating as the Tilden Hotel in October 2016 with the renovation completed in March. The property’s new restaurant and bar, The Douglas Room, opened earlier this year.

Hotel Nikko’s $60M renovation is among the most expensive renovations so far this year. The 533-room hotel was closed for three months during its renovation. The new design, which was inspired by Nikko’s Japanese heritage and fluid lines of a traditional kimono, was incorporated into 405 rooms and suites. The renovation included structural upgrades to the lobby, the public areas, the third-floor ballroom and meeting spaces and improvements to the hotel’s infrastructure and technology. The relaunch came complete with Canine Operating Officer Buster for guests missing their own pets. 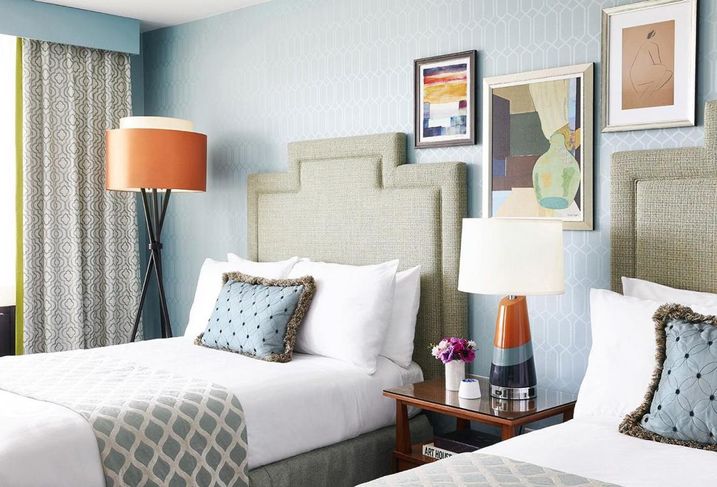 The 49-room Laurel Inn, a Joie de Vivre hotel, offers large rooms that mimic “pied-á-terre,” meaning foot on the ground in French. The rooms are within walking distance of top design shops and eateries. The rooms take on the style of a chic, urban apartment. Guests are offered high-design sets of games and daily refreshments in the lobby.

The design incorporates chenille, silk, velvet and wool with color pallets of blues and browns with splashes of color. Retro-inspired custom furniture pieces and American walnut are interspersed throughout. All artwork throughout the hotel features the work of Bay Area artists, including former Joie de Vivre Vice President of Creative Services Rob Delamater’s own contemporary work and mid-century artwork sourced from his Lost Art Salon gallery. 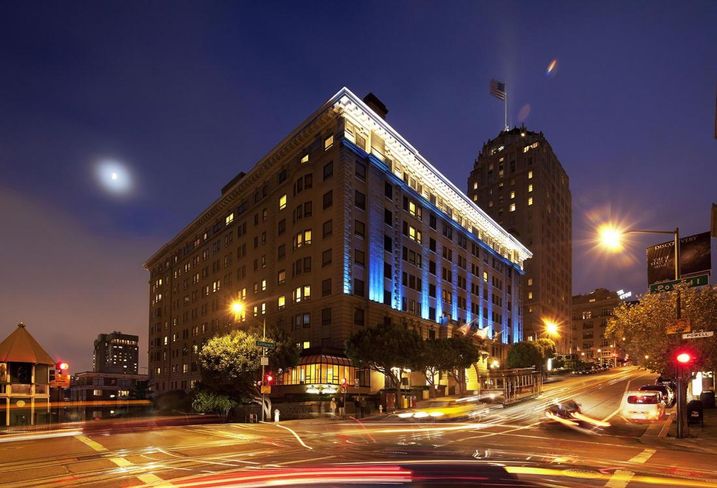 The $16M renovation at the 393-room Stanford Court began in May and will include a redo of the porte-cochére, the café, the lobby, the bar, guest rooms, the fitness center and meeting spaces. The new design incorporates the concept of “where tomorrow meets yesterday” and will integrate Nob Hill’s history with San Francisco’s tech culture. Design will include video, music, sculpture and photography.

The hotel will incorporate mobile check-in, keyless entry, a grab-and-go eatery and offer Zipcars and electric car charging stations in the front courtyard. Additional technology available for guests will include Jambox speakers, digital magazines and e-books through Folio and ultra-high-speed wireless internet. 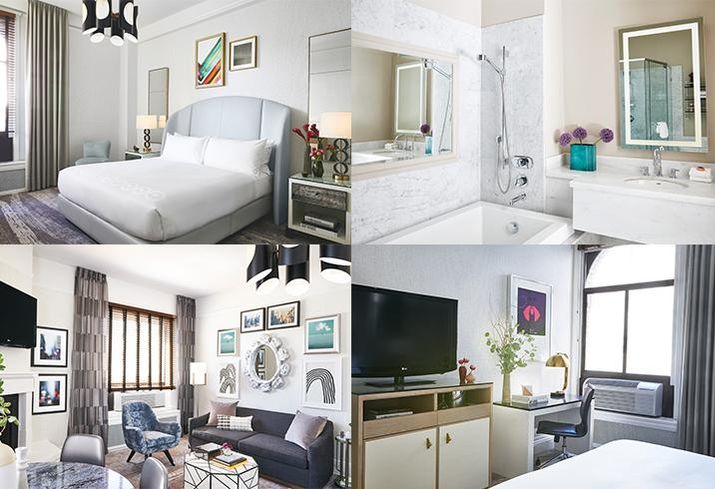 The new design of the Galleria Park Hotel was inspired by the Art Deco bones of the 1911 building, which is an architectural landmark. The Joie de Vivre property underwent a phased renovation with the 177 guest rooms and eight suites completed in late June. The group meeting and event space, lobby and mezzanine will be ready by early 2018.

The property includes about 2K SF of meeting space, a pet-friendly Park Terrace, and food and beverage servicing by Gaspar Brasserie. A previous $4M renovation was completed four years ago. 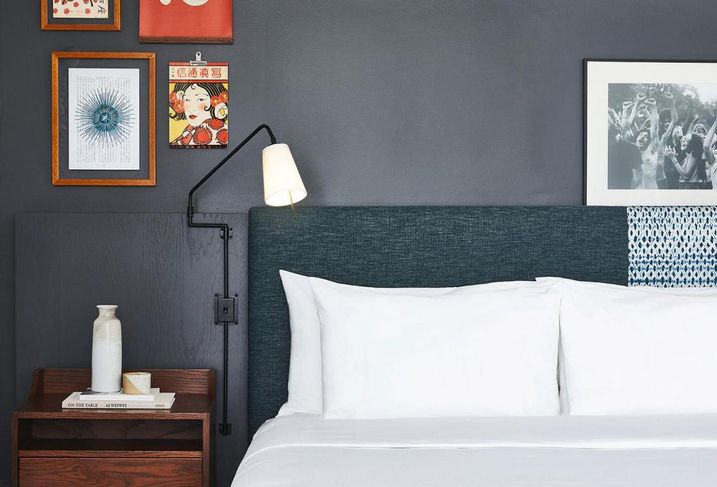 The $28M renovation at the 225-room Hotel Kabuki, a property from Joie de Vivre Hotel, incorporates Japanese influence from the neighborhood with modern, whimsical and bohemian accents. The historic building will be maintained. It was once a 1960s community center connected to the former Japanese consulate, currently the Tower Rooms at the hotel.

The interior redesign will include 19-foot-high ceilings in the lobby lounge and library, 14 suites with up to 600 SF, a Japanese garden throughout the property, unobstructed city views, a new lobby bar, an outdoor lounge with fire pits and a pond, and a designated floor with 13K SF of meeting and event space. The lobby lounge and bar, the library and the courtyard are slated for completion in September.

The fitness center, to be completed during the first phase, includes Life Fitness equipment and a 400 SF yoga studio. The 3K SF fitness center is four times the size of the old space and features floor-to-ceiling windows overlooking an open-air tea garden.

Additional amenities for guests include bikes on loan, meditation aides to use within the Japanese gardens, enhanced cable programming and streaming platforms and programming in the fitness center.