It is the beginning of a five-year, $604M transformation of the historic corridor, and a concerted effort at creating radically changed environs for its retailers, citizens, office occupants and landlords. And it is not without controversy. 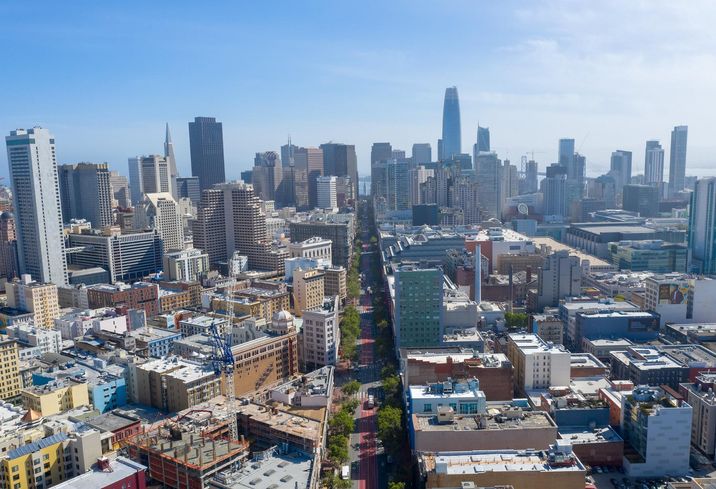 After a final vote in October, operational changes for "Better Market Street," the name for the city's long-gestating plan to revolutionize much of its 4.5-mile thoroughfare, will begin on or around Jan. 29, according to Cristina Olea, the plan's project manager.

Among those changes is the banning of private cars — including ride-sharing, but excluding taxis — for a roughly 2-mile stretch, as the city tries to solve worsening congestion and an increasing number of traffic accidents, while simultaneously matching commercial growth.

"There are at least two properties being developed on every block, so we've got the private investment in the area," Olea said. "Now, the city is investing public money to completely redesign Market Street from building face to building face."

Plans for Better Market Street began not long before the city drew big corporate names like Twitter and Dolby Laboratories to its Mid-Market area with what is colloquially known as the "Twitter Tax Break." To stir commercial investment into that long-struggling portion of Market Street, the city offered a company that located there an exemption on its 1.5% payroll tax starting in 2011.

Thus far, though redevelopment and large employers indeed followed, so has worsening congestion, theft and homelessness, with ground-floor retail often the first casualty. Some ground-floor occupants pay in the hundreds of thousands of dollars per year on security.

Elsewhere, long-term vacancies, like the still-available retail space called 6X6 that opened at 945 Market St. in 2016, persist. Even the city's white-hot office growth has shown some signs of slowing down. 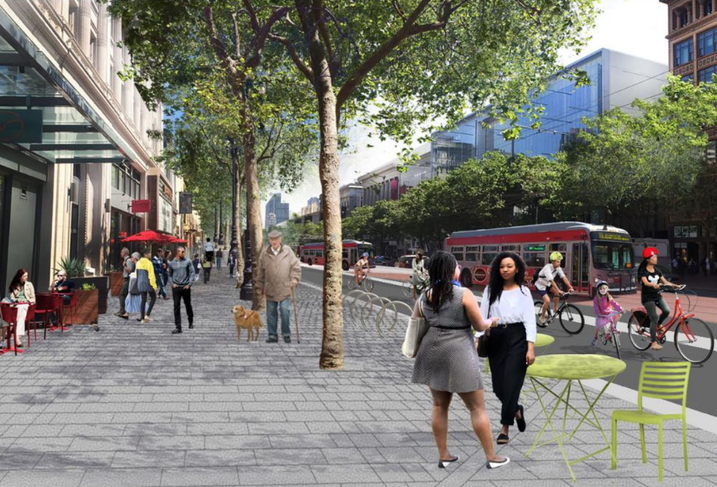 City of San Francisco
A rendering of Market Street after construction

As a result, once-stalled efforts to prohibit cars on the street — both earlier this decade and long before that — gained steam in recent years. Most working in commercial real estate along the thoroughfare, from office landlords to retail brokers, support the measure and see it as a net positive for business to varying degrees.

More broadly, with population and job growth happening rapidly in cities like San Francisco and Austin, Texas, and urbanization happening across the globe, cities can't plan on accommodating a car for everyone, Olea says.

To different degrees, New York City and Boston have both moved toward diminishing car traffic in parts of their respective downtowns. In late September, the city of Boston announced it would permanently close its Birch Street to cars. In October, New York City banned cars from a chunk of 14th Street to a mostly positive overall response.

For New York City, 14th Street is the latest example of its slow movement toward non-car forms of transportation. Earlier this year, it became the first U.S. city to approve congestion pricing, to be imposed on certain crowded Manhattan roads as early as next year. Cars are also permanently banned in certain areas like Times Square and, starting last year, Central Park.

Internationally, European cities commonly go even further. London, for instance, has a plan to ban cars from about half of its central downtown district. Private cars already have to pay a roughly $14 daily congestion fee for driving in much of the same area.

However, San Francisco's long-planned change to its most central artery is a new step in the movement to less car-oriented downtowns, Olea says, adding that other like-minded cities such as Seattle may follow suit.

"We all sort of look to each other and keep tabs on what we're all doing," she said. "I do think this will set some great precedents for other cities."

Colliers International Executive Vice President Julie Taylor, who has several retail listings along the corridor including 901 Market in Mid-Market, supports Better Market's several facets. But she said it only indirectly targets the primary issues of theft and homelessness, which the city must address.

In addition to a private car ban, the city's changes to the street include a widening of sidewalks, new sidewalk-level bike paths, over 100 additional passenger and commercial loading zones on adjacent streets, and the extension of the Muni-only lane from Third Street to Main Street. The new loading zones and Muni-lane extension will be rolled out the same time next month's car ban goes into effect.

Construction is expected to finish in 2025, and the newly conceived street design still allows for private cars to travel across Market Street during construction and after it finishes.

"Having a big Muni lane down the street is a really good idea, and having more pedestrian space, more tables and chairs and safer places to ride bikes is all fantastic," Taylor said.

Construction on infrastructure changes like the new bike paths won't begin until 2021, with the first phase focused on the Fifth to Eighth streets stretch that makes up most of Mid-Market (with the intent being to address one of S.F.'s most struggling neighborhoods first, according to Olea).

By that point, a joint effort involving several city departments including public works and the planning department will have drafted a construction-mitigation plan to support affected businesses.

Based partly on the strength of those efforts, Better Market Street has the support of the San Francisco Chamber of Commerce, says public policy director Jay Cheng.

"Market Street is the backbone of the city, and Better Market Street lays out a very clear, thought-out vision of what it needs to look like," Cheng said.

Likewise, Emerald Fund principal Oz Erickson, who has led multifamily development in and around Mid-Market, says he strongly supports Better Market Street, citing the appeal of carless downtowns throughout Europe.

In terms of how the change affects various property types, he sees retail and residential properties experiencing the most benefit.

"I think no cars will definitely improve the residential experience. If more foot traffic comes to the area, that should help retail, but the city will have to do something to stop the aggressive panhandling," Erickson said. "As for offices, I think the ban is probably neutral." 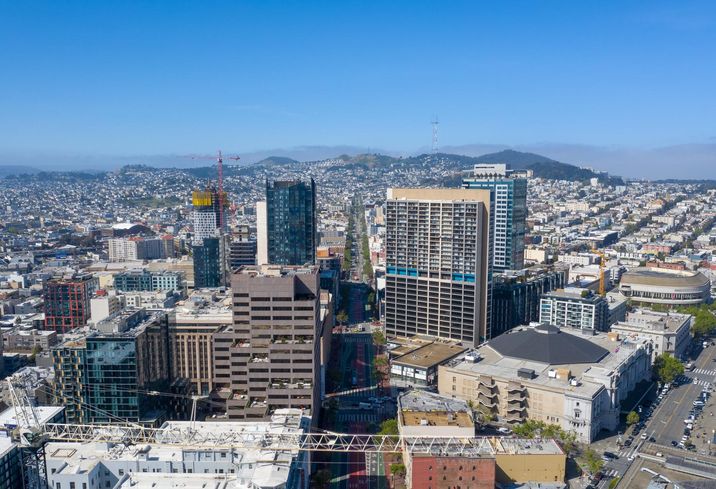 Maven Commercial partner Pam Mendelsohn anticipates the effects of a private car ban being much worse than neutral. They could hamper efforts to fill vacancies amid unsavory street conditions, and she says she has even warned landlords it could devalue their properties.

"Mid-Market is not one of the areas where you park and walk people around, so I'm really worried about the impact that the inability to bring people to spaces quickly and easily is going to have on the real estate along Mid-Market," said Mendelsohn, who has several Market Street listings. "I think it's going to be devastating."

Mendelsohn also has concerns that bicyclists and pedestrians will buy less and smaller items than they would without cars to transport their goods, and she worries about residual congestion on nearby streets.

"Most of my retailers will tell me people on bikes don't come in and shop, strap something to their bike and ride home," she said.

Olea points to the current makeup of Market Street as the city's most pedestrian- and bicyclist-rich road as evidence much of the groundwork is already laid.

"Market Street already has pretty high volumes of people walking and biking, and I hope that restaurants and businesses will only see an increase in customers," she said.