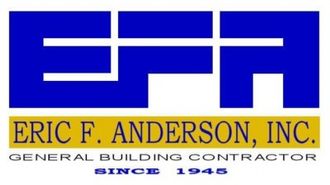 Eric F. Anderson Inc is a third-generation family business that’s been remodeling and building in the San Francisco Bay Area since its inception in 1945. Its founder, Eric, passed the torch to his son, Don, who ran the business until he passed away in 2010. And now it's operated by Don's daughter, CEO Kristin Anderson.

EFA’s dedication to quality has remained consistent over the years, its relationships with clients strengthened with decades of collaboration, but in one realm, EFA has done a 180-degree turn.

“EFA started as a workplace with no opportunities for women,” Kristin says. “It is now a WBENC certified Woman-Owned Business, owned and operated by my mother, Leona Anderson, and me.”

The firm is now sought out internationally, as evidenced by the above photo of Kristin with a team of designers and contractors from Japanese grocery chain Yaoko Marketplace, which flew a team out to talk to an American GC that had experience in grocery stores.

Kristin tells us EFA has undergone its change in leadership while remaining committed to tradition and a family-oriented approach to hiring.

For example, EFA has always self-performed carpentry work, rather than hire contractors, setting it apart. EFA has several multi-generational families on staff.

“My grandfather was a carpenter in Sweden and came to America to begin a new life,” Kristin says. “Being a great craftsman and delivering quality were very important to him, and the people we hire share these core values.”

The culture of safety Kristin fosters is aimed at protecting employees, whom she considers members of the EFA family.

Kristin tells us “clients rely on EFA to be their eyes and ears on the job site, and we take that responsibility seriously.”

“To claim integrity as a core value often comes off as cliché,” she says. “But it's something that really resonates with us.”

EFA focuses its efforts on a number of retail clients, including Whole Foods (above), Wells Fargo, CVS, Apple, craft breweries, other independent grocers in the area and other smaller independent businesses. Safeway has been a client since EFA’s first year in business in 1945.

Kristin firmly believes the continued success of EFA will be ensured by her vision and strong company culture.

“My vision for EFA is to stay focused on adapting and innovating for today’s business environment, marrying technology with traditional values."

Kristin says if her father knew that the office would pass to her and her mother, “he’d be amazed and proud.”

She predicts EFA’s new WBE status and leadership will allow it to grow into new markets like healthcare and public projects.