The Bay Area's commercial real estate industry now has the official OK to proceed with tightly controlled construction work, thanks to the region's latest shelter-in-place orders.

Though some work remains delayed and other projects canceled, social distancing, symptom-checking and other requirements haven't stopped the biggest general contractors from restarting construction at most sites, they said. 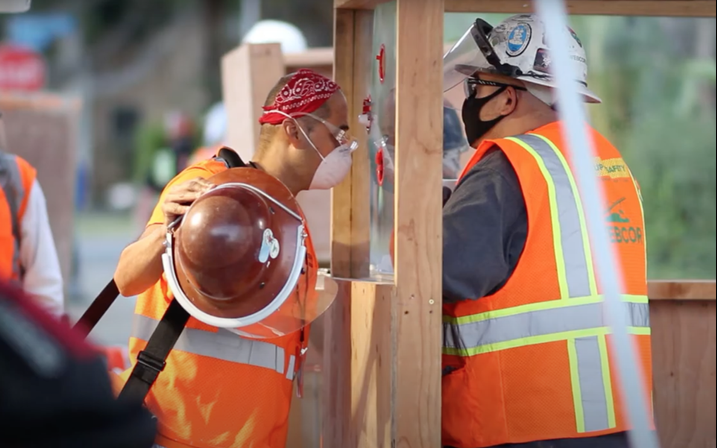 Courtesy of Webcor
Workers on a Webcor project in Southern California get checked for symptoms of having the coronavirus.

"It's been fairly smooth," Swinerton Vice President Andrew Pearl said. "The subcontractors have been very responsive, and I think everybody wants to get back to work."

San Francisco-based Swinerton had 50 to 60 sites shut down by April shelter-in-place orders, Pearl said, estimating that as of May 7, the general contractor was back to work at about 70% to 80% of those sites.

Whereas the initial six-county orders in mid-March allowed most projects — from office to hospitality to housing — to continue, the April update stopped almost all in their tracks. Only certain healthcare projects, essential infrastructure and residential projects with 10% or more affordable units were permitted to go forward until Monday, May 4.

Now, the latest orders have ushered in an especially quick turnaround for Webcor. The construction company has about 25 projects in the Bay Area (about 15 of which it is the GC on and 10 of which it is a self-performing concrete subcontractor on) and was working on 24 by Thursday, Webcor Senior Vice President Greg Chauhan said.

In both those and smaller projects, daily screening for symptoms, 6-foot social distancing and construction-specific personal protective equipment provisions must be made, among other requirements.

For larger projects exclusively, GCs must hire a qualified third-party consultant to supervise contractor compliance with the large project protocol.

Both Pearl and Chauhan chalk up their companies' relatively quick turnarounds to off-site preparation done during April, before most construction was actually allowed to take place.

That included a series of impromptu, collaborative meetings involving dialogue between both unions and some of the West Coast's biggest contractors and developers, including Webcor, Swinerton, DPR Construction, Brookfield and Related California, according to Chauhan. 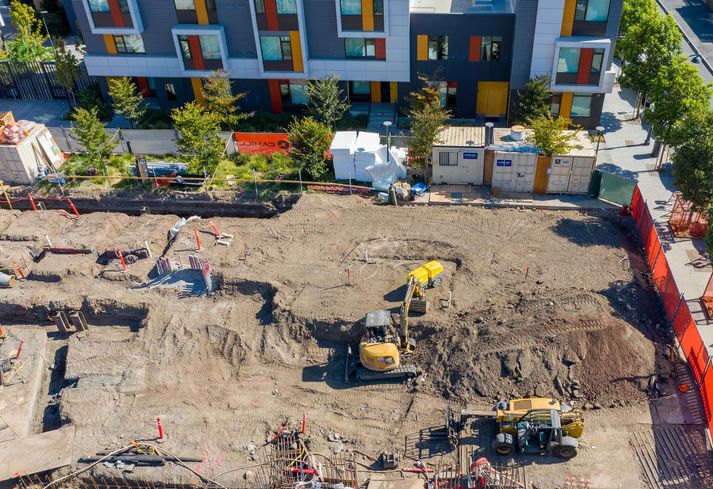 Courtesy of Droneshot
A Mission Bay construction site in October.

As a result, Pearl and Chauhan said they are expecting site productivity of above 80% despite the coronavirus, with Chauhan adding that some projects in the shoring or demolition phases are at full capacity.

On the owner and occupier side, Turner & Townsend USA Managing Director John Robbins said companies have been less confident starting or restarting projects at least immediately. Of the construction and management consulting company's Bay Area tech clients, about 50% still have their projects on pause, according to Robbins.

“I think they’re waiting for others to test the grounds first,” he said. “We’ll see if that changes over the next week or two. I think all of our tech clients are taking a serious look at their portfolio from the standpoint of schedule impact and delays and how quickly they may need space to come online.”

On top of economic uncertainty, questions about supply chain depth and existing materials stockpiles for things like steel studs or sheet rock should be asked, especially with manufacturing in China slowed this year, Robbins said.

Across the Bay Area, there are likely to be a number of projects lost, according to Pearl.

For Webcor, too, some projects remain tall orders right now. Projects relying heavily on vertical transportation, be it an elevator or exterior lift, are being slowed by necessary worker shift-staggering and on-site social distancing.

Even so, Chauhan said the GC is within about two weeks of re-engaging that 25th and final project: tenant-improvement work at the Facebook-leased, 45-story Park Tower in San Francisco.

"It has those vertical transportation challenges," he said.