Sudberry Properties is replacing a dilapidated shopping center in Imperial Beach with a 45k SF hybrid-retail project, called Breakwater Town Center. The project will provide services commonly found in a community center, as well as a mix of national and local lifestyle tenants. Bisnow caught up with Sudberry president Colton Sudberry last week to learn why the project is so important to the residents of Imperial Beach.

The former shopping center on the 4.5-acre site was in such poor condition, the city bought it, scraped the site and sold it to Sudberry, which had won the city’s RFP, Colton tells us. Imperial Beach lacks a community gathering place and has limited retail amenities, he said. Breakwater provides the community a town center and is designed as a gateway to both Imperial Beach and Coronado, home to a major Naval base.

The project provides outdoor spaces, rendered above, for people to socialize, dine and enjoy community events.

"We’re really excited about this project,” Colton says. The city has put a great deal of effort into getting the property back from the state, which had confiscated it after local redevelopment agencies were eliminated in 2009. “If it wasn’t for the tireless and heroic efforts of past and present city staff and elected officials, this project would still be on hold,” Colton tells us.

Imperial Beach Mayor Serge Dedina says the project is important to the city’s redevelopment. The mix of national and local retailers Sudberry is bringing to the center adds a new dimension to the city’s vision for this project. “The center is sure to become an important community hub that will foster pride and camaraderie,” he says. City manager Andy Hall says community members, Sudberry and the city have worked hard on this project for the past six years, and he is delighted it will soon break ground. The project is transformational for Imperial Beach’s future, as it serves as a catalyst for more redevelopment projects, Andy says.

“This is an eclectic beach community, and there’s a lot of redevelopment going on along the waterfront,” Colton tells us. In 2000, the city developed a master plan that envisions a quaint, casual, pedestrian-oriented waterfront district with widened sidewalks to provide visitors, residents and tourists with shopping and dining opportunities, hotel accommodations and well-designed, low-scale structures with an oceanfront vibe. 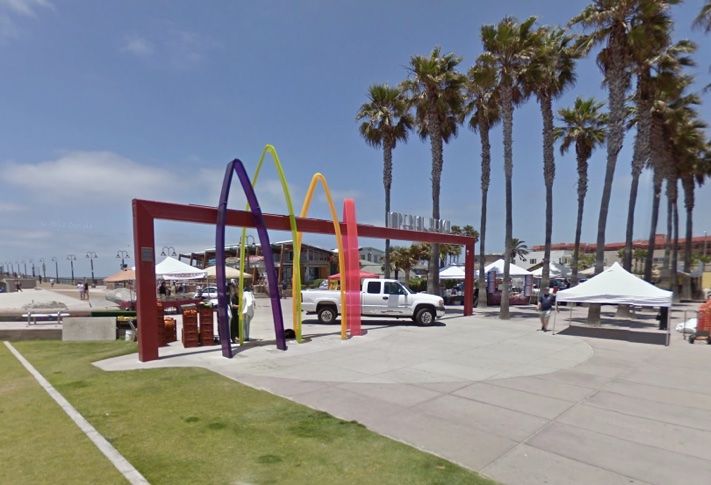 He says more than $1B has been invested along the waterfront in Imperial Beach and the Coronado waterfront since then, creating about 3,000 jobs. This includes the Palm Avenue End Project, which provided new sidewalks and additional parking, as well as Portwood Pier Plaza (pictured), which pays tribute to the city’s “big wave” surfing history and provides access to the Imperial Beach Pier and beach, with grassy open space, picnic areas, a tot-lot and an entertainment stage. A new four-story, 78-room Marriott also replaced an old inn on Seacoast Drive.

The plan calls for redeveloping the Palm Avenue Commercial Corridor, where Sudberry’s project is located, at Palm Avenue and 9th Street. Palm Avenue runs through the middle of the city all the way to the waterfront. The first two new projects there were the Promenade Shopping Center, anchored by a CVS pharmacy, and Wally’s Marketplace, which is a grocer.

Completion of Sudberry’s town center project is expected in mid-2017.