With attracting young, millennial talent a priority for employers, downtown San Diego is undergoing new office development and older buildings are being modernized to accommodate collaborative space and new amenities. 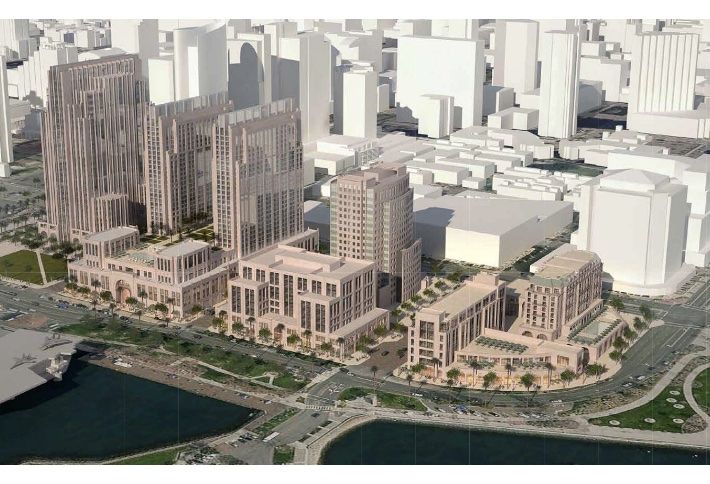 Ten years in the works, Manchester Pacific Gateway will soon break ground on downtown's waterfront. The $1.3B, 2.9M SF mixed-use development is a public-private partnership of local developer/owner Manchester Financial Group and the U.S. Navy. Designed by Gensler, this project ultimately will add nearly 1.1M SF of Class-A office space and about 291,264 SF of destination retail, providing tenants a full range of on-site retail amenities.

Plenty of office is underway. Kearny Real Estate Co. is modernizing the 30-story office tower at Emerald Plaza. In East Village, Lowe Enterprises is putting the finishing touches on IDEA1, a mixed-use development with a mix of residential, office and retail space. Additionally, Block D, a six-story, $23M office building in the Makers Quarter is under construction. Makers Quarter projects will provide 971K SF of office space over the next five years. 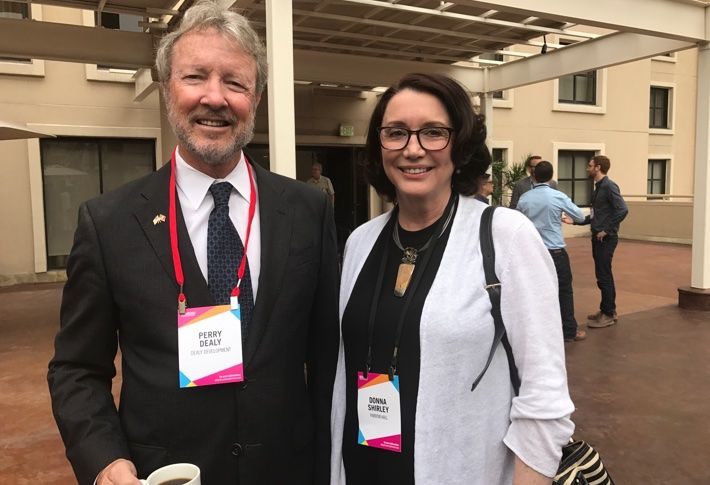 Speaking at Bisnow’s event last week, Dealy Development principal Perry Dealy, who is serving as development consultant for Manchester Pacific Gateway, said the project, which is targeting LEED Gold certification, will include two hotels with 1,350 rooms and 120K SF of meeting space, a 40K SF museum and 4.5 acres of open space, including a 1.9-acre public park.

The development will occupy eight blocks on the waterfront.

"We have been 10 years in lawsuits with the California Environmental Quality Act and California Coastal Commission, as well as in a lawsuit filed by Cory Briggs that went to the Supreme Court," he said. "The blessing in delays was an updated design that is more responsive to today's marketplace and lifestyle-focused office product."

Similar to what Rick Caruso did at the Masonic Temple in Glendale, retail will provide amenities for office tenants, Dealy said.

"The challenge now is getting venture funds to invest," he said.

This 12-acre site, also known as the Navy Broadway Complex, is owned by the Navy and adjacent to Seaport Village, which is also slated for a major redevelopment. It anchors the city’s $230M North Embarcadero Visionary Plan.

Phase 1 of Manchester Pacific Gateway, which involves $850M in development, is scheduled for completion in 2020 — the 100th anniversary of the historic Navy Pier — and includes a new 372K SF, 17-story, Class-A office tower for the U.S. Navy. 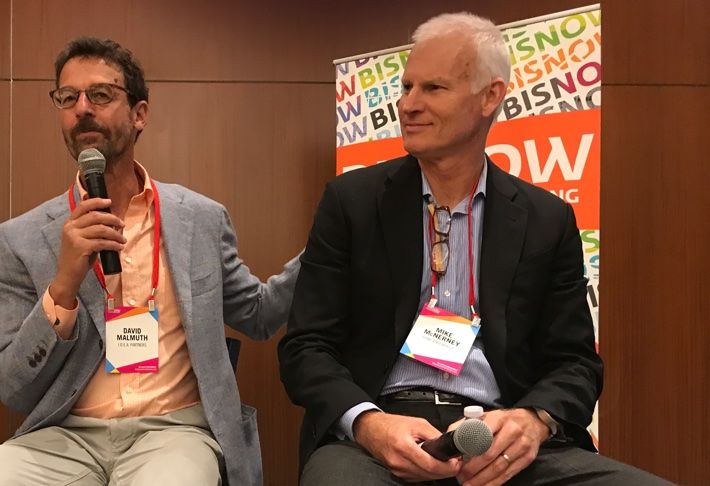 Patricia Kirk, Bisnow
David Malmuth, partner at I.D.E.A Partners, and Lowe Enterprises' Mike McNerney, discussing how the design of IDEA1 serves the needs of tech and other creative entrepreneurs.

Malmuth said when the I.D.E.A. District was conceived “downtown had the live and play but not the work. There has been huge growth in office space throughout the region, but not in downtown. The success of the region will be dictated by how well we attract educated 25- to 36-year-olds. We need to nurture the downtown environment to grow the next generation of companies.”

“We’re creating a place for really smart people, for entrepreneurs to live and grow their businesses in downtown,” McNerney said. “Our [original] goal was 50/50 residential/commercial. The brokers told us, ‘if you build it, they will come.’ The banks said ‘if you can get an office tenant, we’ll finance it.’” 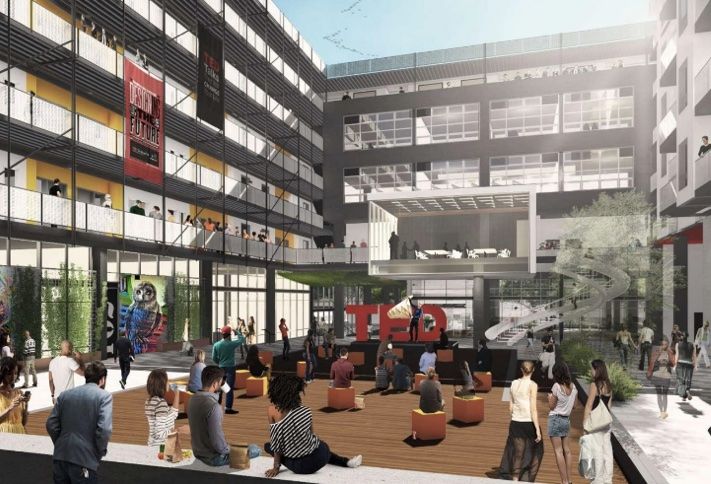 The Miller Hull Partnership
The 10K SF Hub at IDEA1 provides a space for the entrepreneurial community to connect, share ideas and socialize.

Ready for occupancy in October, IDEA1 at 1200 F St. offers 292 studio and one-bedroom apartments and about 14K SF of commercial space, the majority of which has been pre-leased. Signing an 89-month lease for the 7,717 SF office component, Seer Interactive, a Philadelphia-based digital marketing agency, is moving its San Diego office here. Tacos by LoLa 55 will also be on-site, and McNerney said a gourmet coffee shop is expected to take the remaining retail space.

The project features a central 10K SF atrium/courtyard called The Hub, which is designed as a flexible, collaborative gathering space designed to connect, inspire and generate innovative ideas and will also host social and educational events. 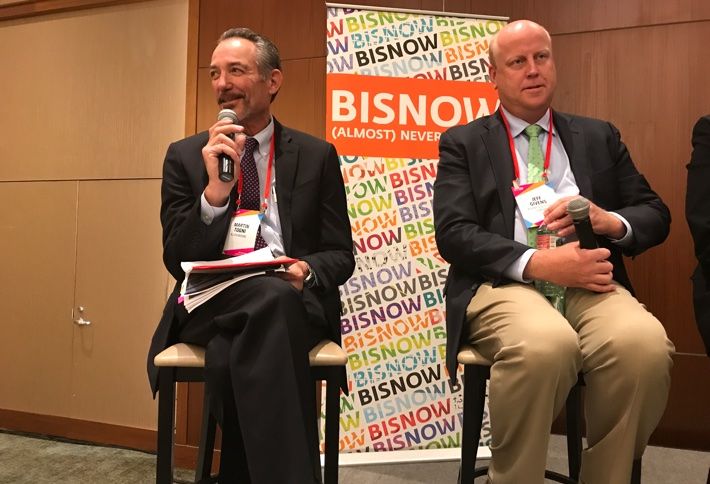 Kearney Real Estate Co. Senior Vice President Jeff Givens said his company realized the value of downtown San Diego office space with the acquisition in 2014 of the Union Bank Building at 530 B St. Kearny invested $15M in capital improvements to modernize common areas and added amenities, including an outdoor meeting space and rooftop garden, to attract tenants with a young workforce. The building was 50% vacant at closing.

“Six months into the project, we noticed that the building was attracting tenants from North County, UTC and Mission Valley,” he said. 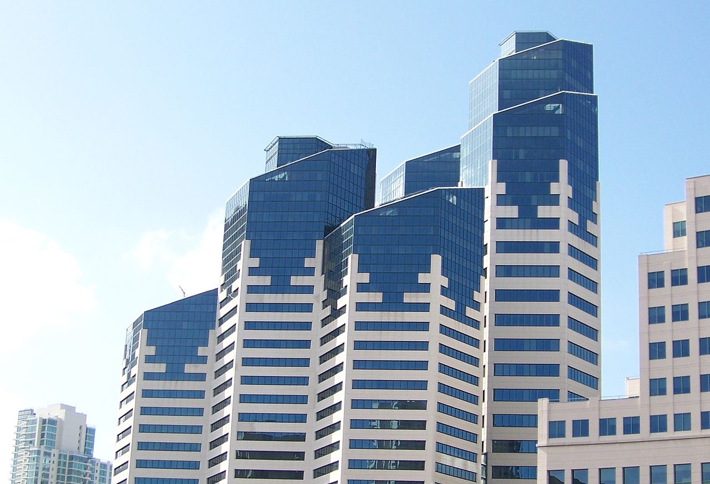 Kearney sold the building to Canada-based Bosa Development two years later for a nice profit, and then purchased the iconic, 30-story, 364K SF Emerald Plaza office tower, which is undergoing $5.5M in capital improvements to upgrade the lobby, the elevator cabs and other common areas.

“We were attracted to this project because it has a true mixed-use environment,” Givens said. "The amenities were already there — there’s stuff always happening at Emerald Plaza.”

The office tower shares a lobby with the Westin San Diego Hotel, which provides office tenants an on-site café and a full-service restaurant. 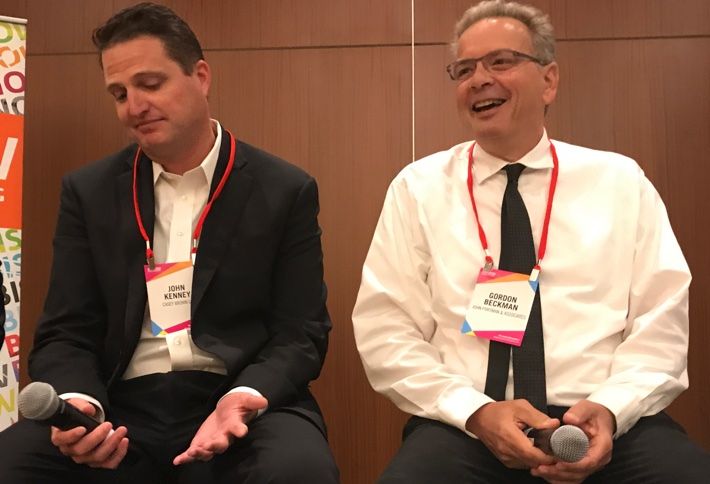 Architect Gordon Beckman, principal and design director at Atlanta-based John Portman & Associates, noted San Diego’s participatory environment. Downtown projects, which provide connected spaces for sharing ideas and socializing, is a model for what a city can be, an example of generational urbanism, he said. People are coming back into the city to be part of the connected environment, which is happening in the workplace, on the streets and in parks, Beckman said.

This is a model for building cities that are special places,” he said.

“Downtown isn’t for everyone, but demographic trends favor it,” Malmuth said.

People tend to move to the suburbs for the schools when they begin families, he said. But over the last 10 years, nine schools have been added to the downtown San Diego area, including the Urban Discovery Academy in East Village.

“The most important thing we can do now is create jobs for people living in downtown so they don’t have to get into cars every day and commute to work,” he said.

McNerney said downtown San Diego has lagged other cities in this regard.

“If you want a great city, you have to have a great downtown,” he said, suggesting the proposed UC San Diego satellite campus in East Village will serve as a catalyst for job creation. “Maybe San Diego State will follow.” 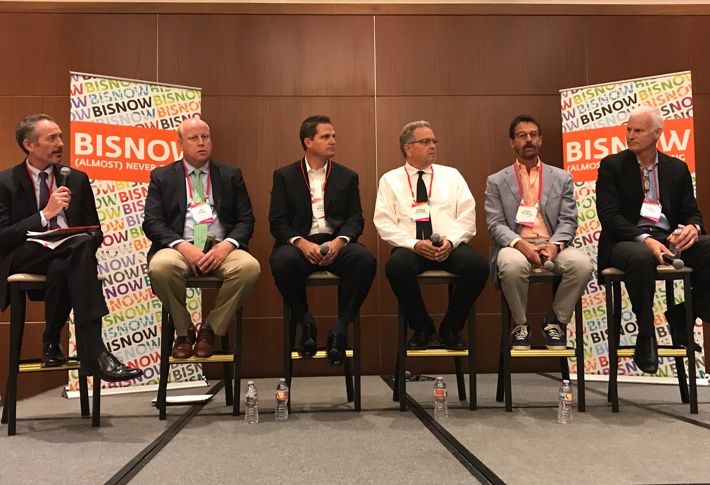 With the Trolley soon to connect downtown with UTC, transit ridership is expected to increase dramatically, McNerney said. He said Mission Valley’s updated community plan will provide developers programmed environment impact reports like in downtown, which eliminates the extra time it takes developers to take projects through the EIR process.

A number of dense projects are under construction or planned in Mission Valley, McNerney said. His company is redeveloping the Town & Country Hotel on the San Diego River to a residential, mixed-use project. Next door, a JV of Levi-Cushman family, owner of the Riverwalk Golf Club, and Houston-based Hines is planning to redevelop the 200-acre site, which is adjacent to Fashion Valley Mall, to a mixed-use development with 4,000 residential units and office and retail components.

Additionally, the Houston-based Dinerstein Cos. is nearing completion on Millennium Mission Valley, a nearby, 305-unit, mixed-use development. 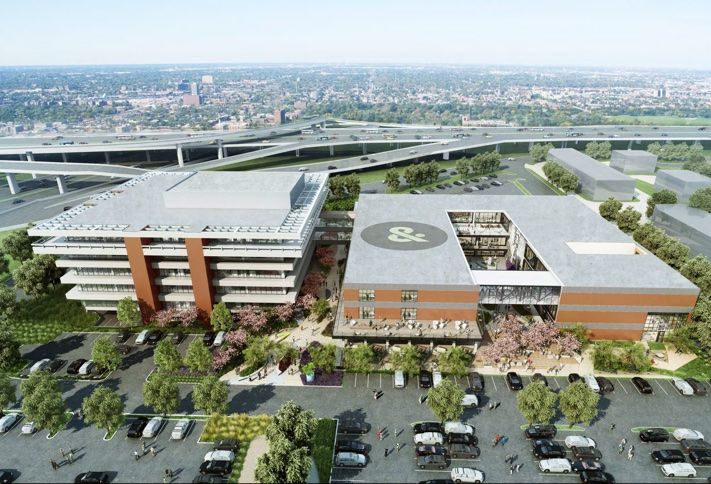 The Casey Brown Co. is nearing completion on redevelopment of the former San Diego Tribune’s 12-acre office campus to a modern, amenitized office campus. Rebranded AMP&RSAND, the project includes two buildings: a three-story building that formerly housed the printing plant and five-story office building, with a total of 330K SF of office space. 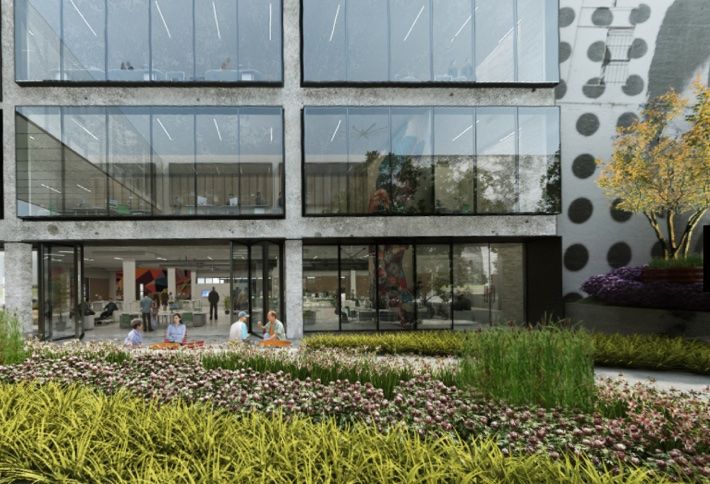 Citing the project’s features, Casey Brown Co. principal John Kenney said loading docks at the former printing plant have been converted to outdoor collaborative spaces. The project has nine patios and 64K SF of outdoor spaces, including a central meeting place called the Treehouse, a patio space under a massive ficus tree that features hanging chairs and hammocks, as well as an amphitheater.

Along the San Diego River, at 350 Camino de la Rein, a walkway will provide access to the riverfront, offering tenants an alternative meeting place.

Kenney said the building exteriors have received a new skin, and interiors have been converted to large, collaborative office suites of up to 90K SF, providing companies room to grow. He said tenants have the option of spreading employees in spaces across the campus without isolating them from co-workers, as buildings are connected by a bridge.