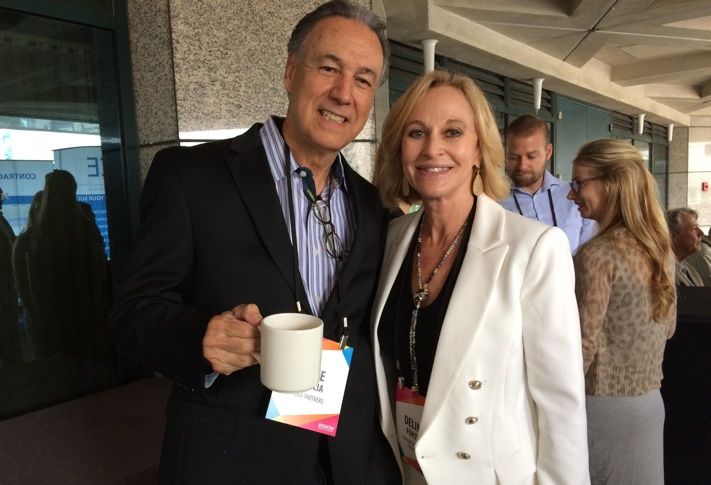 Innovative Commercial Environments CEO DeLinda Forsythe, who moderated, asked Pete what his organization is doing to attract the creative class to San Diego. He said he and partner David Malmuth created the I.D.E.A. District (Innovation, Design, Education and Arts) to make the East Village a magnet for the creative class. (That's Pete and DeLinda above.)

“We believed it imperative to do that because the 21st Century is all about attracting and retaining talent," Pete said, “and if we don’t do that we’ll fall further and further behind. Instead of approaching this project from a real estate standpoint, we came up with a bigger vision, a place-making vision—what is really required to attract this creative class." 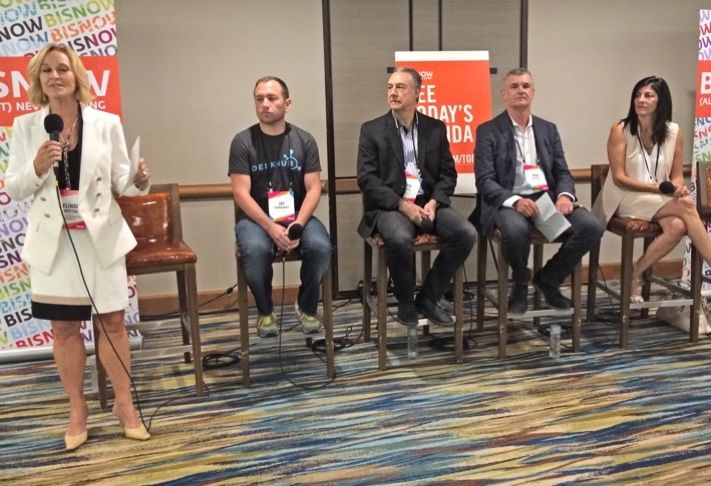 After six years of putting all the pieces in place, Pete noted a JV of his firm and Lowe Enterprises is now under construction on IDEA1, which will open in about a year. The project has 298 units, about 10k SF of co-working space on the ground floor and 8k SF of retail. "The concept is to create a building that enhances and augments people’s lives,” he said, pointing out when designing projects, developers need to research what their target really wants.

This project is taking a user-interface approach with both design and programming, Pete said. “This starts with Tai Chi and yoga in the morning, TED Talks in the afternoon, events and so forth, because people are looking for more than just shelter, they’re looking for connections," he said.

Above is DeLinda with panelists Jay Chernikoff, Pete, Jack Burger and Maria Martinico. 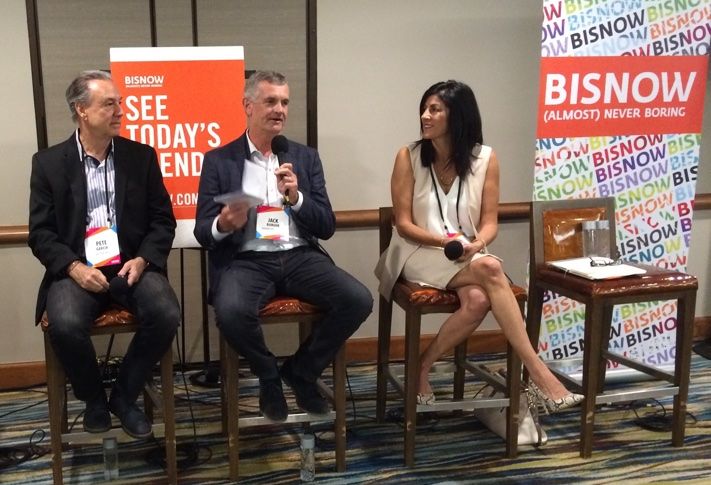 Burger Construction president Jack Burger, whose company does creative office build-outs, discussed creating a collaborative work environment, using the conversion of his company’s office space as an example. He said designing and programming the new space was a collaborative effort of management and staff. "We wanted to understand what they wanted,” Jack noted. “This process morphed and blurred into 'well, we want it to feel like home, but we gotta get some work done.'"

"So instead of $600 Aeron desk chairs, we got $100 bouncy balls and loud music, because they can work with music,” he continued. “Now, instead of wearing headphones, they collaborate while bouncing on balls and have a good time with it.”

Pete stressed the need to design what he calls “Swiss army knife buildings” that can be shifted to other uses as the market changes over time. He said the most successful buildings are the old loft buildings. “They could have been a soap factory 40 years ago, now are condominiums, but 10 years ago might have been a restaurant.

"It's important to know what your target audience is looking for now, but also build flexibility into the design, so you can pivot as the market changes over the next 10 to 15 years."

Jack pointed out the amount of waste involved in doing tenant improvements. “We tear apart stuff every five (years) when a lease is up,” he said, noting the price of labor and materials continues to rise. At some point, this will become unsustainable, said Jack, challenging designers to use reusable products and materials, like pre-fab walls that can be moved around to reconfigure a space.

Panels can be recolored or covered with printed materials that can have logos or other images that make the environment cool, as well as sustainable. Developers with a long-term vision can add value to their buildings and save money by using reusable products, he pointed out, rather than throw away perfectly good materials every time a new tenant moves in. 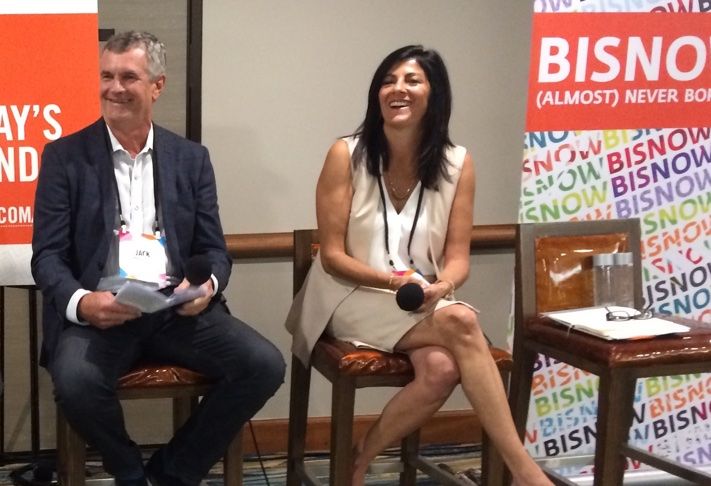 Gensler director Maria Martinico (here with Jack Burger) said in working with different landlords, end users and co-working brands, there seems to be a consensus on the high value of creating a community of connection. “Good ideas come from interactions with other people,” she pointed out, “so bringing a range of businesses together under one roof is inspiring and leads to innovation.”

People spend 90% of their lives indoors, Maria said, encouraging developers to consider designing health and wellness into the workplace environment. She explained the benefits of WELL Building certification. This performance-based rating system is similar to LEED, but rather than measuring a building's impact on the environment, it measures the impact of the building on occupants.

She noted Gensler is relocating its office from the 16th floor to the bottom two floors at the 22-story 225 Broadway office tower in Downtown to encourage staff to walk more by providing a connection with the outdoors. “We will provide red Gensler-branded bikes so clients and staff can ride to meetings or down to the waterfront for lunch,” Maria continued, noting these are just some of the strategies planned to emphasize fitness and being active. 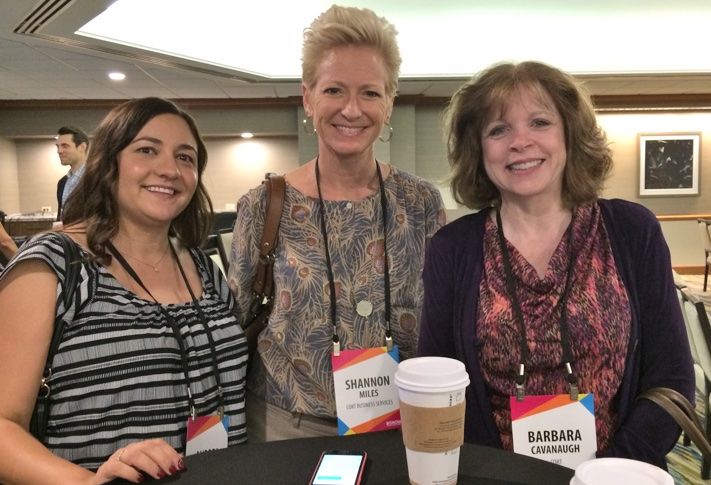 Pete pointed out social activity is also vital to good health. ”People need to be fulfilled socially and in a way that is intellectually stimulating.” He noted programming should be used to enhance and augment the social experience, which is something most co-working spaces do well.

Pictured above are Andrea Ventola of Anderson Audio-Visual and Shannon Miles and Barbara Cavanaugh, both of Cort Business Services. 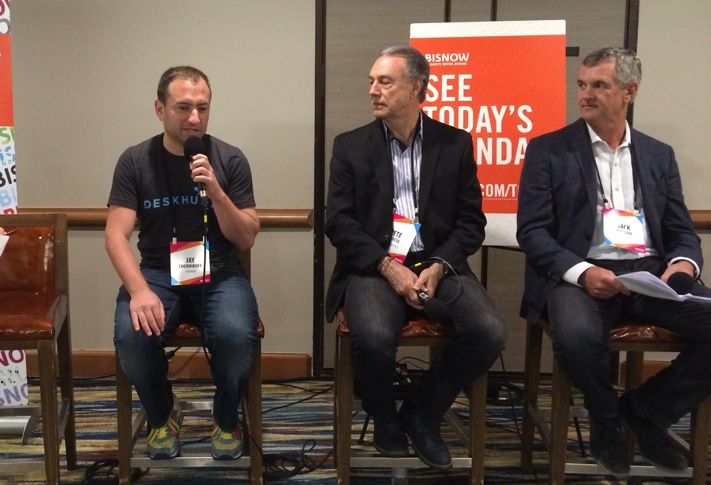 In answer to a question about how and why co-working space evolved and its advantages, DeskHub founder Jay Chernikoff (left with Pete Garcia and Jack Burger) noted co-working is a variation on executive suites, or a move toward the “uberization” of most assets—Airbnb is another example.

“I think co-working is at the forefront of a whole reutilization of an asset class,” he continued, noting it’s the next wave for people who are working from home or in small teams. “What we provide them is flexibility and certainty.”

He pointed out there’s always been a demand for solo office space from professionals who leave a firm to go out on their own, so this is simply evolution of the inefficient solo office to a seat in a shared space that also offers a break room and conference space. So-called “solo-preneurs” are all ages, not just Millennials, Jay said. DeskHub members with similar interests often form teams. 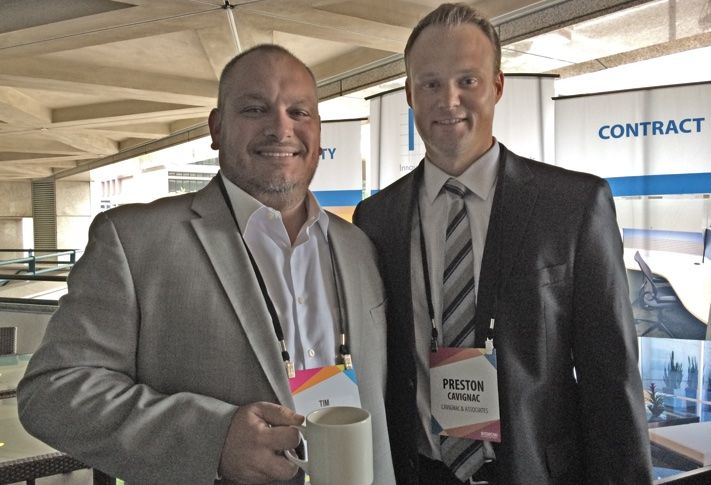 Office has had high cap rates because of cost of tenant turnover and TIs, Jay said, suggesting workers will be willing to accept uniformity in exchange for flexibility. Co-working and what comes after will become a “vital part of an ecosystem that incubates tenants for landlords,” he said. “So, I think there’s a lot of opportunities for co-working spaces, especially brands, to partner with landlords who understand that we can fill your buildings.”

He also predicted the evolution of a new relationship between landlords, tenants and brokers. Brokers may take on the role of asset manager, figuring out who is going to go where and cultivating those relationships on a long-term basis, he explained. "Brokers may work on an asset fee basis, because the traditional model of paying a 3% or 4% fee on a five- or seven-year deal, frankly, might go away.”