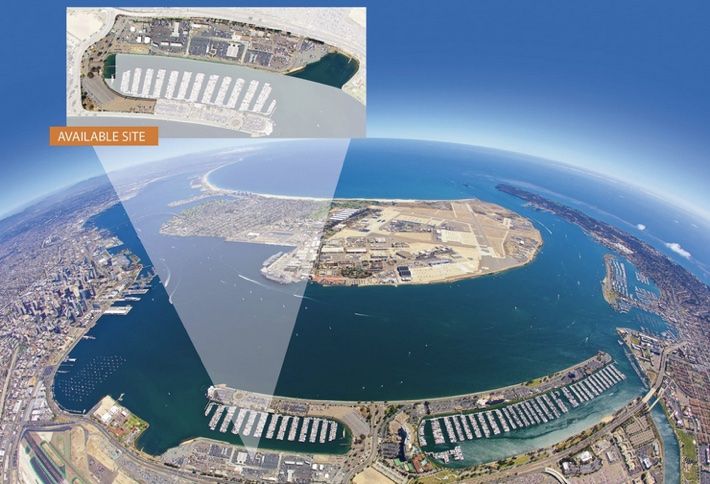 The San Diego Unified Port District board has split the East Harbor Island project between the two local developers, OliverMcMillan and Sunroad Enterprises, who were finalists in the competition to redevelop 47 acres of rental car lots and 13 acres of water to a mix of uses.

If approved by the California Coastal Commission, Sunroad will build a 325-room hotel on a nine-acre parcel known as the “elbow,” because it connects the man-made peninsula to the mainland, and another 175 rooms to the east on Harbor Island. OliverMcMillan will build the bulk of the 35-acre project, including hotels, restaurants, shops and offices, as well as man-made canals. The plan also calls for a new $60M, 100k SF port district headquarters building and new home for the harbor police, which the port district will fund, reports the San Diego Union-Tribune.

Port district staff had recommended giving the entire project to OliverMcMillan, which had proposed a $978M, mixed-use development, with 1,500 hotel rooms, 271k SF of retail and office space, and man-made canals, that would generate up to $10.5M annually in revenue after four years of operation for the port district—three times as much as the rental car lots had generated. Sunroad's mixed-use proposal would have generated $8M for the port after seven years.

Port commissioners decided at last week’s meeting to award part of the project to Sunroad, after company chairman Aaron Feldman told them his company had spent $2M and 11 years trying to develop hotels on a nine-acre portion of the peninsula. He said it would be unfair for the port to give that element of the project to someone else.

Five of the six commissioners voted to negotiate exclusive agreements with both companies and in favor of requiring the developers to work together. Board chairman Marshall Merrifield, who recused himself from the vote, welcomed the compromise. [SDUT]