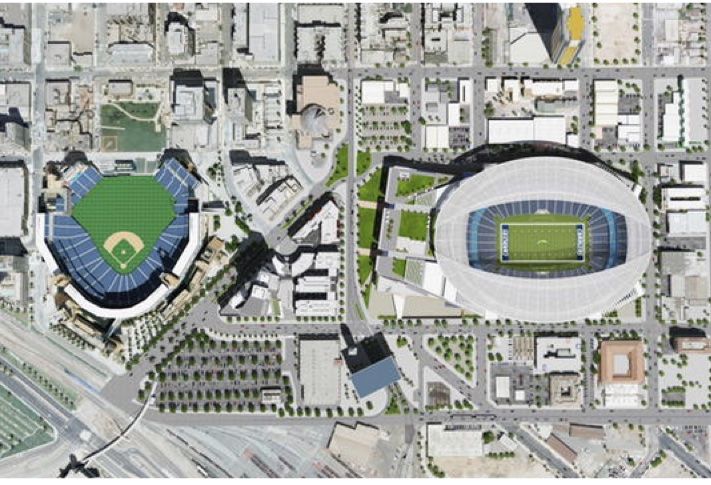 An East Village activist group is proposing another plan for the redevelopment of the site of the proposed San Diego Chargers Stadium-Convention Center, just as the $1.8M ballot initiative to fund the "convadium" project comes before voters for approval in the November election.

Above is an aerial view of the proposed Chargers Stadium-Convention Center site, which includes properties bounded by K and 16th streets and Imperial and 12th avenues.

This alternative plan, called the East Village Focus Plan, would include a mix of residential and office space to accommodate high-tech startups and fuel San Diego's desired innovation economy, as well as new parks and plazas and possibly a convention center annex or arena. It proposes 3,114 apartments and condos, 300k SF of retail, 350k SF of meeting space and 1.1M SF of office space.

The designer, Rob Quigley, who designed the new San Diego Central Library and is an outspoken critic of the stadium proposal, told the San Diego Union-Tribune the East Village Focus Plan is a long-term, market-driven plan that would accommodate lots of different uses and involve multiple developers.

While this plan doesn’t have a private sponsor, like the NFL and Chargers, willing to put up $650M or $1.15B from a proposed hotel tax hike, it would generate an estimated $55.2M in annual state and local taxes—much more than a sports stadium—and provide 5,590 permanent jobs with an annual payroll of up to $447M. [SDUT]