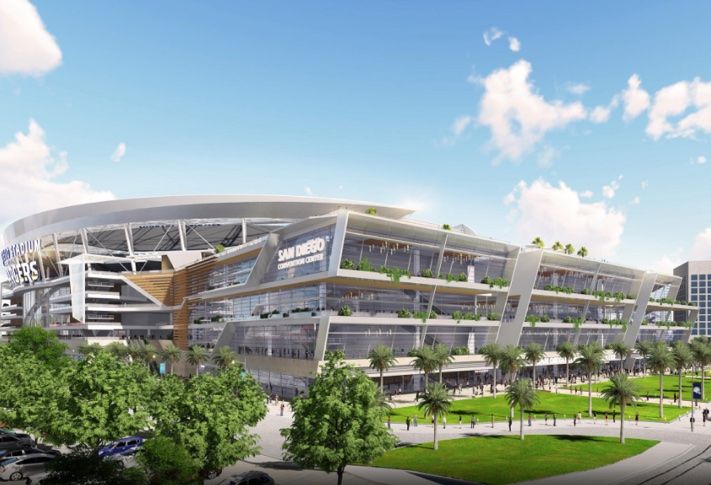 As Nov. 8 draws nearer, the Chargers ballot initiative to fund the Convadium, a combined football stadium and convention center annex, is getting more play. Yesterday, the Chargers released a study that forecasts the new stadium will attract 900,000 additional visitors to Downtown SD yearly, boosting the region’s hotel revenues by $750M during the first decade of the stadium's operation.

Visitors to the stadium would generate on average $12.5M annually in revenue from the higher 16.5% hotel tax proposed by the Chargers' initiative, or Measure C on the ballot, according to the independent study by Hunden Strategic Partners, a tourism economics consultant hired by the Chargers to examine the economics of their ballot proposal.

The firm’s managing partner, Robin Hunden, told the San Diego Union-Tribune that initially he was a skeptic, but the study demonstrated that it is a pretty sound proposal. He said the stadium would not compete with the convention center, but rather “the focus is on making the pie bigger.”

Chargers financial advisers estimate the tax revenue would cover payments on at least $1.15B in public bonds. The rest of the funding would come from $650M in contributions from the team, the NFL and fans. The proposal also provides $36M for tourism marketing. Any surplus revenue would go into the city’s general fund.

Also released this week was a study by local tourism operations expert David O’Neil that evaluated the impact of the proposed convention center annex on meeting business. The Chargers hired his firm, Conventional Wisdom, to consult on the proposed meeting space and impact on the market. The study found the Convadium concept would allow the city to offer space to midsized meetings on nearly 95% of the dates sought by meeting planners.

The NFL has agreed to schedule no home games on Mondays and Thursdays during prime convention weeks, a concession that would allow the new center to book 70% its capacity, which is comparable to the bay front meeting facility and considered fully booked by the industry.

O’Neil said many cities are targeting midsized meetings, which are considered the “heart of market,” instead of huge conventions. He said exhibitors with large equipment, such as amusement operators and public works associations, would favor the Convadium concept because they could display their rides, trucks and other large equipment on the stadium floor.

A report earlier this week by the city’s independent budget analyst concurred with the Hunden report, concluding the hotel tax increase proposed would cover repayment of the bond issue. A study by the SD Taxpayers Association, however, predicted hotel tax revenue would fall short of the amount needed to cover the city’s $1.15B portion of the facility’s cost. [SDUT]