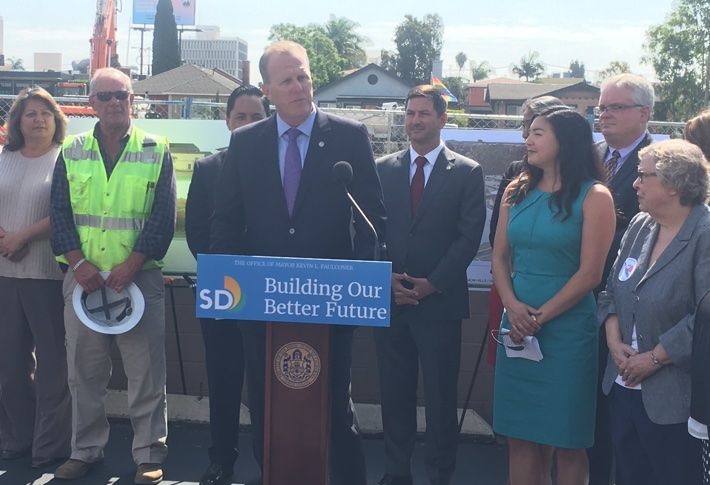 Uptown, which includes the Hillcrest, Bankers Hill, Park West, Middletown, Mission Hills and University Heights neighborhoods, is getting a new $20M, 14K SF library — three times the size of the current Uptown library. The new Mission Hills-Hillcrest/Harley & Bessie Hills Library is planned on a site on West Washington Street, between Front and Albatross streets in Hillcrest.

“This new library will serve neighborhoods that have seen significant growth at a time when education and affordable access to the internet are more important than ever before,” San Diego Mayor Kevin Faulconer said at a groundbreaking ceremony Tuesday.

“Over the last 50 years, Mission Hills and Hillcrest have grown and evolved significantly,” said Assembly member Todd Gloria, a former San Diego city councilman who was on hand for the event.

Gloria said the new library will function as a gathering place for the community, as well as a place where students can study.

“Libraries are the hub of our neighborhoods, and this is an exciting new community space that will bring people together and put new resources at their fingertips," Councilman Chris Ward said.

Funding for the new facility represents a public-private partnership between local philanthropists and the City of San Diego, with $10M in grants from the San Diego Foundation’s Hervey Family Fund and Harley and Bessie Knox Memorial Fund and $10M from the city. The San Diego Library Foundation’s Campaign for Excellence is raising an additional $3M for the library.

She said it will be another great example of how the city’s libraries serve as a place for opportunity, discovery and inspiration. The new facility is slated for completion in 2019. It will replace the old branch library built in 1961.