San Diego developers face several key challenges in the years to come as they look at the market ahead. Experts discussed the topic and trends in our Building the Next San Diego panel at Bisnow's Annual Construction & Development event last week. 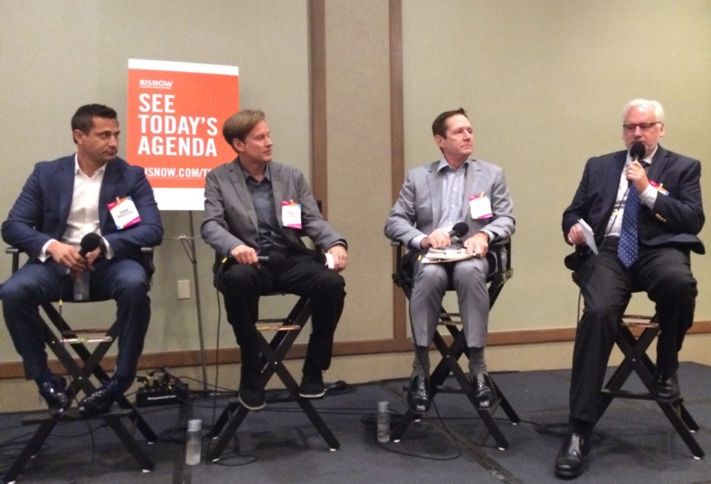 Moderator Harry Jones, a principal at DCI Engineers, asked the panelists: “What key changes do you see in your market sector that you’re facing over the next three to six years, and where do you see things headed? Pictured are Adam Robinson, Darrel Fullbright, Charles Tourtellotte and Harry Jones.

LaTerra Development CEO Charles Tourtellotte said the future is different for rental and for-sale residential product. “For rental product you can plan on Millennials driving things in a different direction,” he said, suggesting they will want larger units as they marry and start families. “I think Boomers will also want bigger units on the for-rent side too, because they’ll have kids and grandkids that will come visit them. There’s been a trend lately to small units, and I think that will change.”

“On the office side it’s all about demographics, and Millennials are part of it,” said Gensler design director Darrel Fullbright. The workforce is much more mobile than ever before and spaces are designed to be much more open and collaborative, which means people are using less real estate, he said. With fewer square feet per person, there’s less demand, and that’s really having an impact on what happens going forward.

“One of the other things we’re seeing in San Diego, is we’re running out of land,” Darrel continued. “There just isn’t a lot of land, green or infill, left out there—more in North County, but certainly not a lot in Central County—so we’re going to see a big shift towards repositioning. We have a huge amount of assets from the '70s and '80s that need a lot of attention, so I think we’ll see a ricochet of that, and new development will be centralized around transit,” he said.

Picking up the ball on the industrial side, RAF Pacifica Group founder Adam Robinson said up until now industrial construction was a simple tilt-up box with a little bit of office. It didn’t matter much where you put it as long as trucks could get to freeways, but that’s starting to shift.

“We’re starting to build something we call creative industrial,” he said, “adding amenities like in creative office buildings. We’re starting to implement those features into industrial, which I don’t think has ever been done. With the Millennials and what we’re seeing in today’s workforce, we feel it’s something we have to do to keep our buildings leased and attract the best tenants." 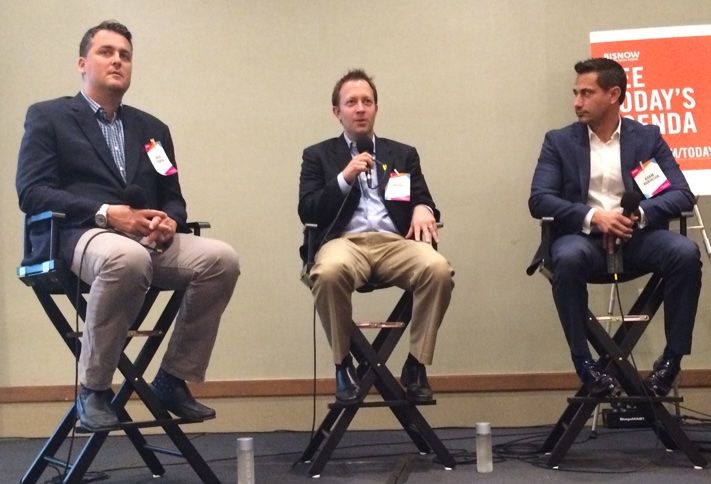 DPR Construction business unit leader Brian Gracz said Millennials are an even bigger group than the Boomers and will have an even bigger influence on things as they age. He said this will extend to designing and delivering flexible spaces and finding creative ways to give tenants ultimate flexibility.

As an extreme example, he cited a furniture manufacturer that offers a little red wagon concept where workers can transport their stuff between home and office workstations. People feel it is important to be close to work and have amenities and public transportation, Brian said, pointing out those things make life easier, but for contractors will present more challenges as “we build out the rest of San Diego County and Downtown.”

Charles said some office tenants are taking the work/play concept to the next level. His company is building an 80k SF office building in Hollywood for a tenant that wants a mini golf course, yoga studio, fitness center and outdoor dining area. The building has no private offices, just conference rooms, and the rest is open space.

Zephyr Partners co-CEO Brad Termini predicted a long run before any major correction takes place in this real estate cycle, particularly for multifamily. “There is a drastic shortage of housing in California, so we’ve got a lot of units left to build before we start seeing what happened in ’08, ’09, ’10,” he said. “We’re pretty optimistic on the next three years.”

The panelists followed with a discussion of what they are incorporating into their projects to address these changes and trends. Charles said his company is designing lifestyle projects.

“We don’t do anything without a rooftop deck that has a pool that gets sun, full outdoor kitchens and TVs. Our fitness centers are 2k SF Equinox gyms, with 20-foot ceilings, and in some cases designed by celebrity trainers,” he explained. “We’re trying to attract the tenant who might drop their gym membership, move in with us and put the money toward rent.”

“We’re designing something that makes people want to come to the office,” Darrel said. People no longer want to be tied to their desks. "It’s about socializing, collaboration and giving people more freedom in how they want to work."

"One of the things that is a big explosion is the 'co-movement,'” he said. That includes co-working, co-living and more. “We’re actually looking at some models were you mix them all together, so projects are co-live/work/play. So there’s all kinds of weird mixed-up combinations, but the idea is how do we foster new business and do it in a way that makes people want to come to an office." 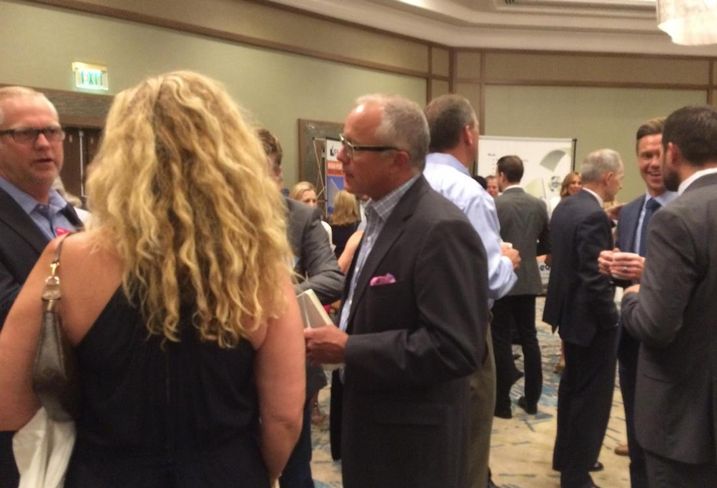 “Echoing what these guys are saying, we’re putting in rooftop decks and gyms in our industrial buildings now,” Adam said. “Industrial’s behind all these other groups that are more at the forefront, which have shorter-term leases as well.” Industrial leases are for seven to 10 years, so "we have to look at not just what they want in one year, but in 10 years are they still going to be happy in the space and want to renew and stay in our buildings,” he said.

Adam said besides office, amenities and restaurant space, buildings have be “best in class for industrial. There are newer forklifts out, so it means high clear height, bigger grade-level doors and large parking areas." The standard office space for industrial is 15% to 20%, but Carlsbad users often need 40%, he said, so it's important to offer the flexibility to go from 5% to 10% office in distribution buildings to 60% office for true corporate HQs.

Brian said some creative office tenants think there should be a discount because the space lacks walls and ceilings, but the opposite is true. When you get rid of the ceiling, which is a visual barrier to all the crazy stuff that happens above there, making it attractive ratchets up the cost, he said. From a financial perspective, it sometimes is a loss to bring these spaces to life in a way that makes them usable.

Creative office concepts also are creeping into other sectors. For example, Brian's company recently won a design-build contract from Kaiser to create a medical office building where people want to be. This was accomplished by creating spaces for a farmers market; Starbucks-type concept; and things that foster wellness, such as yoga and healthy cooking classes. 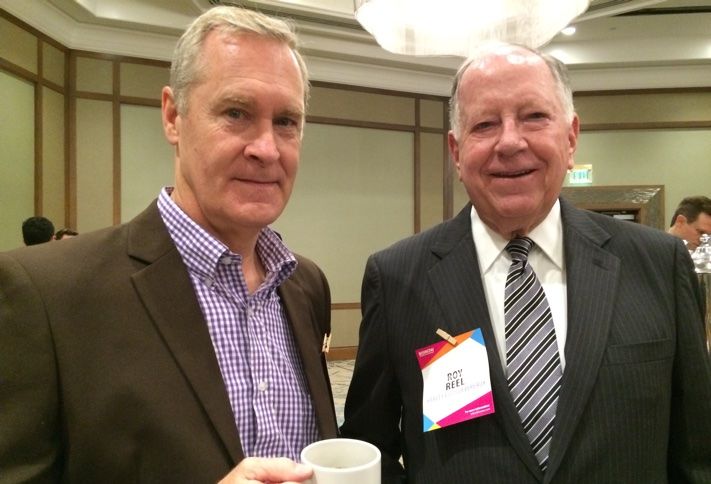 Among guests at this Bisnow event were Michael Nelson of Kilroy Realty Corp and Roy Reel of HED.

Charles said government regulation is the biggest challenge facing developers in San Diego and throughout California. “It’s difficult to get a project to the point where you’re going to break ground. It’s expensive, time-consuming and in some cases financially prohibitive.” He suggested the affordable housing issue is driving the political will to implement policies disruptive to development and getting an opposite result.

"What’s happening is the municipalities are bringing in fees and other solutions that really are working against the issue itself," he said. To offset the affordable housing fees, Charles said cities provide density bonuses, but then the developers get pushback from the community.

Darrel said a proposed change to the California Environmental Quality Act would fast-track the approval process for projects where sites were already zoned for multifamily development. But developers have to find sites already entitled and ready to go, which is difficult to do, he said.

Brad said he is optimist about this legislation, because even with the right zoning in coastal communities, people don’t want you to build. He contended that an older minority of residents use “community character” as an excuse to oppose any development. “So I think what Jerry Brown is proposing could be meaningful," he said. "Maybe not as meaningful as it needs to be, but it’s a good starting point.” 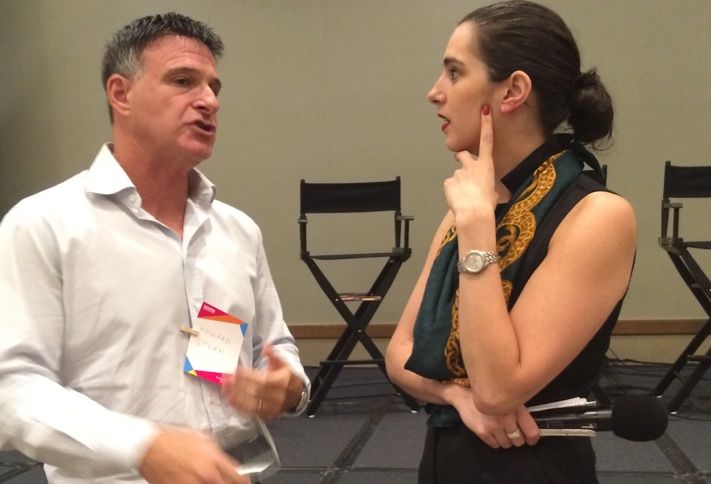 Both Darrel and Adam said financing office and industrial is difficult. Darrel noted San Diego is traditionally a spec market, but lenders won't finance new office product without a tenant in place or huge amount of equity.

Adam said getting creative industrial financed posed an even greater challenge than a traditional industrial building, because lenders couldn't understand why anyone would spend $90/SF to build industrial space. "It was a lengthy educational process getting them to understand that there's no competition for this type of product, but we got through it."