The Remaking Of Metrocenter Mall: What Is The Future For The Once-Popular Retail Destination?

From the late 1970s through the early 2000s, Metrocenter Mall in Phoenix was the most popular mall in city limits, benefiting from its location in north Phoenix off Interstate 17.

Two decades since its heyday, Metrocenter Mall is looking to benefit from its location once again for a rebirth as a healthcare, housing, retail and transportation destination on the final stop of Valley Metro’s Light Rail expansion off 19th Avenue. 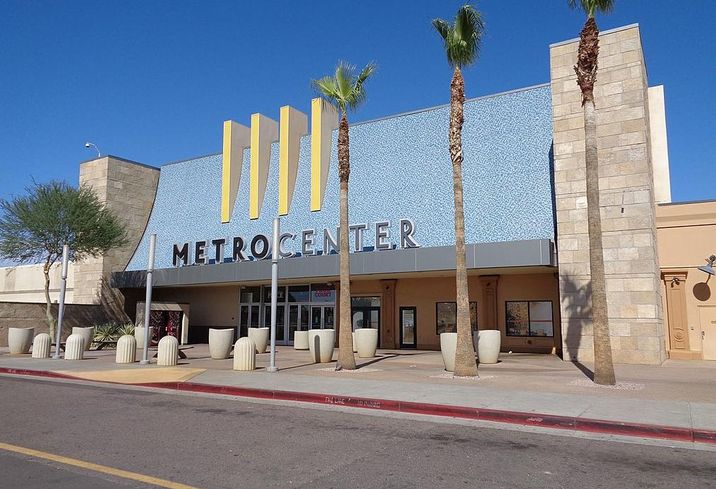 “There are 500,000 residents in a 5-mile radius of Metrocenter Mall. It is one of the most dense labor pools in Phoenix,” said CBRE Senior Vice President Ashley Brooks, who has specialized in the north Phoenix market for 35 years. “That is why there is already a plethora of Fortune 500 companies along the Interstate 17 submarket.”

As a result, Metrocenter Mall and its accompanying commercial and retail buildings appear out-of-date to prospective tenants. It is an image that developer Carlyle USA sought to change when it purchased the 1.3M SF property in 2012, removing it from several years in foreclosure and receivership during the Great Recession.

Since the acquisition, Carlyle has signed a Walmart Supercenter as a retail anchor for the complex, but it is still looking for the proper entertainment, retail or service anchor attractions to recharge the rest of the development.

“In order for the project to kick-start, we need a strong anchor, whether that is a cultural, educational or medical destination,” Carlyle USA President Abdi Mahamdi said. “Despite being in the top five of population in the U.S., Phoenix lacks current cultural institutions, and we hope to add that at Metrocenter Mall. We have also talked to several hospitals and corporate headquarters and have been close to placement each time, but it has not happened yet.” 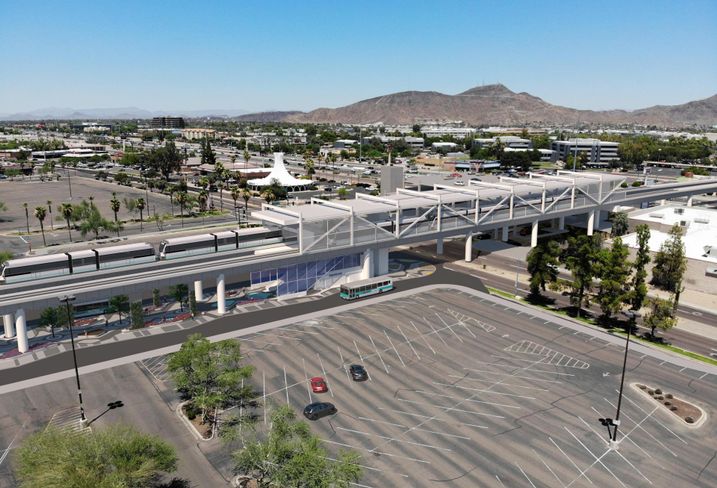 Valley Metro
Rendering of the Metrocenter Light Rail Station that is expected to be completed in 2023.

Identifying the right developers to partner with has been an issue for Carlyle USA.

“Some of the developers want to develop the property themselves and not with us, and that has been an issue,” Mahamdi said. “We never envisioned to manage the entire situation, we want to be the master developer and deal with one parcel.”

Carlyle USA has hired Newmark Knight Frank to market the property and identify tenants for the now 1.6M SF of commercial space and work with current occupants, which include U-Haul, Dillard’s and Harkins Theaters.

“[The project] needs to be done right and start with our parcel,” Mahamdi said. “We have had interest from warehouses and low-end retailers, but it was not the right fit for the project.”

The redevelopment has gained more attention since the May 2018 decision by the Phoenix City Council to spend $25M to expand the Valley Metro Light Rail with a 1.6-mile extension that will add three new stations and a new highway overpass over I-17 and into its final stop: a new transit center at Metrocenter Mall, scheduled to open in 2023.

“Once the new transit center comes in, there will be more clarity about the project. It will come online and development will occur even faster,” Mahamdi said. “The demographics are there and the sheer size of the development alone could turn it into a second downtown-type destination in Phoenix.”

That would be an extreme turnaround story as the Metrocenter Mall area’s office vacancy rates have consistently been 24% and 27% since 2015, according to CBRE.

“Currently office lease rates are averaging $20 per SF for annual full-service leases in the area,” Brooks said. “That is roughly half the price of markets in the Desert Ridge, Scottsdale and Tempe areas. Pricing will be at the forefront as the initial draw to get developers in and leases signed.”

With the planned new highway overpass connecting to the Valley Metro Light Rail transit center at Metrocenter Mall, it is sure to catch the eye of Phoenicians. However, for those driving to Metrocenter Mall, parking is still one issue that needs to be addressed before moving forward with long-term plans.

“One of the biggest remaining issues we had to face are the restrictive easement agreements that have been sold to different parcels,” Mahamdi said. “Most have expired but we still have a few issues with parking provisions that need to be addressed to make sure parking is as efficient as possible.”

Getting developers and tenants on board to agree to the same long-term logistics and overall direction of the mall is the constant challenge that Carlyle USA faces in turning the redevelopment into a desired destination for the first time in decades.

“Employers are looking for places where their employees can live, work and play,” Brooks said. “The future of Metrocenter could bring in all of those elements and the ease of transportation with the light rail, but they have to execute. It is a value play that could bring a more stable workforce to north Phoenix and dramatically increase the quality of life.”