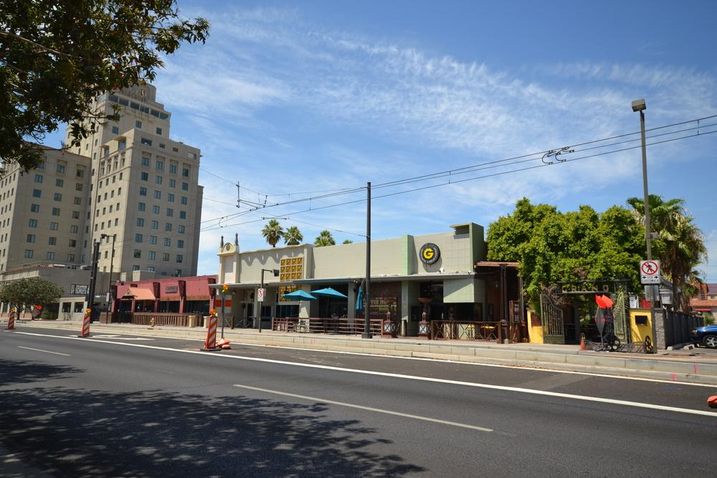 In a decade, downtown Phoenix has transformed from a virtual ghost town to a must-see destination.

To capitalize on a dense population of finance, technology and tourism jobs in the area, between 2010 and 2020 locally owned entertainment venues like Charlie Levy's The Van Buren (owned in conjunction with Live Nation) and Crescent Ballroom were built, along with over two dozen restaurants and bars. It has sparked immense growth and a brisk sales tax revenue for the city.

But now, the coronavirus has turned downtown Phoenix back into a ghost town, and Phoenicians are wondering what the area will be when this is all over.

“Obviously, nobody knows the timeline of this situation, but we have already started to focus on how we welcome people back to downtown Phoenix,” Downtown Phoenix Inc. President and CEO Devney Preuss said. “All ideas are on the table, and we already know we will have to work closely with the city to identify the best use of our shared resources.”

Potential tactics to boost trade in the neighborhood include reducing parking meter hours that currently are enforced from 8 a.m. to 10 p.m. daily, including weekends and holidays.

Increasing foot traffic for businesses is also at the forefront of the conversation. Preuss said she has been discussing new uses with her peers, including debuting interactive storefronts or creating events on the large sidewalk and patios downtown.

But momentum for building downtown Phoenix residences and recreation is in serious jeopardy. Kenect Phoenix, a mixed-use high-rise located at 355 Central Ave., is slated to begin pre-leasing this summer. With the pandemic still in full swing, only time will tell what the demand is when they begin that process.

After much fanfare and a yearlong construction process, downtown Phoenix's first major grocery store, a Fry's Food and Drug across from Chase Field and Talking Stick Resort Arena, opened in late October 2019.

The grocery store had expected to have large pregame and postgame sports crowds, and even included a bar on-site to meet demand. But less than six months later, its future revenue is in jeopardy, with the National Basketball Association temporarily suspending its season and Major League Baseball postponing the start of its season.

“One of our bright spots has been all of our projects under construction, including 12 high-rise developments,” Preuss said. “We have truly evolved downtown Phoenix into a real community and neighborhood over the last five to seven years, and work is still being done at an accelerated pace, with less people being on the sidewalks.”

SVN Desert Commercial Advisors owns several properties in the area, including the currently listed 702-710 Central Ave., a 15K SF mixed-use property that was the former home of the popular nightlife destination Club Downtown.

SVN, which tracks data in the area, estimates that between 20,000 and 30,000 vehicles pass through the busy Van Buren Road corridor downtown every day, while its Roosevelt Row neighborhood has between 16,000 and 18,000 vehicles traveling through it every day. But since the coronavirus closures, traffic in both areas can be measured in the dozens, not the thousands.

“Those are already high-traffic areas, so when businesses open up again, whenever that is, they will have a faster opportunity to make up some of the lost revenue because of high foot traffic and high vehicle traffic,” SVN Director Melissa Swader said.

“Flexibility is going to be the key when things open up again, and this building can go up to 500 feet in the air as a high-rise or be left alone and maintained as a mixed-use destination,” SVN adviser Paul Borgesen said.

“Whenever the city comes back, it will still be made up of a lot of gig workers who have nontraditional work schedules and who want to live in close proximity to restaurants, retail, entertainment and the first major grocery store in downtown Phoenix," he said. "That demand will still remain.”

Given that change, the site at 702-710 Central Ave. may end up following the newest trend in downtown: multifamily units placed above a large retail destination.

“Our market analysis shows it is the future for the downtown Phoenix market,” Borgesen said. “Downtown Phoenix is extremely developer-friendly with its zoning laws, so it makes it easy to develop properties with minimal or no issues.”

Those friendly zoning laws could be an important factor for the area's return, as new businesses launching in 2021 and 2022 could end up being just as important as current commercial residents.

“There is a pause because of our current climate, but I do not think that the demand for urban spaces in downtown Phoenix is going to go away,” Roosevelt Row Community Development Corp. President Nicole Underwood said. “Whenever we return, it will be the perfect time to take proactive measures to gather residents and business tenants in our area, to show them how community translates to commercial real estate value down the line.”

Underwood and the Roosevelt Row Community Development Corp. are counting on longtime destinations like the Lost Leaf to lead the charge back to normalcy when quarantine orders are lifted. She expects the growing number of downtown Phoenix residents and their pent-up demand to drive the economic bounce back.

“I expect when businesses open again people are going to return to the communities and destinations that they care about the most first,” Underwood said. “We have worked hard to build a real community in downtown Phoenix and that is not going away any time soon.”