Phoenix’s CRE Transformation Pours $3B Into Biotech And Research 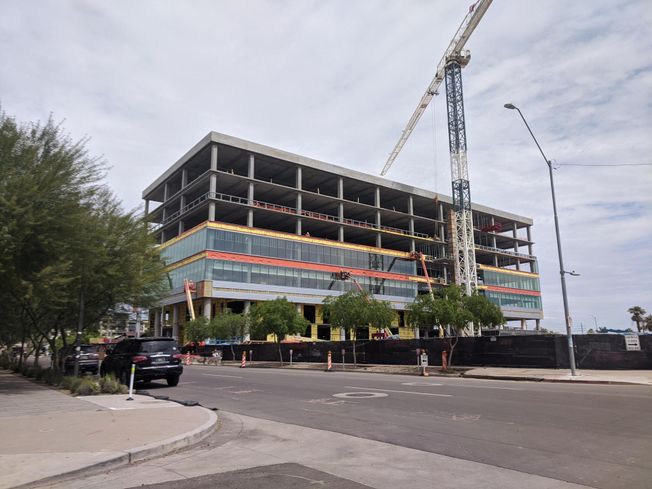 The rare absence of both spring break and spring training tourists has changed Phoenix’s current focus.

Now, instead of tourism, city officials are shifting gears to the needs of the service and healthcare sectors, which have seen a boom in development and capital inflows.

“In a 24-month span, we have over $3B in current and proposed construction projects in the health services, hospital and medical research industries within the Phoenix city limits,” said Claudia Whitehead, a spokesperson for the city.

“These projects cover over 4.5M SF and will provide over 7,000 jobs. Our status as a ‘young’ big city means there are less boundaries in the medical field, and that opens the industry to collaboration and innovation," she said. "Most people do not associate Phoenix with cutting-edge medical technology, but we are hoping that changes this decade.”

In news that has not been shared with the general public, biotech company Caris Life Sciences, which has two commercial projects underdevelopment in Phoenix, will announce Tuesday a new artificial intelligence process being used to treat cancer.

Caris currently has two projects underway: a 45K SF lab addition scheduled to open in mid-April at The Cotton Center, Arizona’s largest business park; and a brand-new lab opening in late April in the First Solar building at 202 Highway and Mill Ave.

Both are prime examples of how CRE is advancing medical innovation across Phoenix.

“Phoenix has become a hotbed for molecular diagnostics and attracting therapeutic companies,” Caris President David Spetzler said. “Since it is close to the airport, our Cotton Center location provides us perfect functionality to ship our specimens. The lack of natural disasters and lack of humidity makes Phoenix an ideal location to set up laboratories and the [commercial real estate] industry is definitely reaping the benefit.”

Central Phoenix and downtown Phoenix are both enjoying a research renaissance, as food and beverage chains give way to medical research and biotech buildings.

The Phoenix Biomedical Campus is a 30-acre site downtown that runs south to north from Van Buren Street to Garfield Street, and from east to west from Seventh Street to Fourth Street. The Translational Genomics Research Institute, a nonprofit medical research institute, was the foundation for the campus, and has been downtown for almost 15 years. Since then, 16 companies that came out of TGen have a commercial real estate presence in Phoenix.

The Phoenix Biomedical Campus is also home to the University of Arizona’s colleges of Medicine, Nursing, Pharmacy, Public Health, and Telemedicine, as well as Northern Arizona University’s College of Health and Human Services and four additional allied health programs. Arizona State University’s College of Health Solutions is also based on the campus, which has a partnership with Wexford Science & Technology.

Wexford Science & Technology's topping out ceremony to showcase Okland Construction's completion of the 226K SF Innovation Center at 850 North Fifth St., a partnership with Arizona State, was supposed to be held March 27. The coronavirus pandemic scuttled that plan, leading to a mass video distribution of the current construction site to the public. The project is now slated to be completed in late 2020.

“Finding a place in the Phoenix Biomedical Campus has been a priority for us, because of the environment for private and academic research collaboration,” Wexford Science & Technology Director of Development Kyle Jardine said. “The academic and medical communities have dropped their boundaries, so private companies feel free to join collaboration opportunities by expanding their office and laboratory presence.”

It is an expanding presence that will include Maricopa Community College as a tenant, along with over 100K SF over two floors that will be occupied by Arizona State. The fifth, sixth and seventh floors will be fully developed for private laboratories.

“The combination of affordable land and a ‘new’ big city open to innovation is why we see this as just the beginning phase for Phoenix as a medical research and resource destination,” Jardine said.

Traditional healthcare heavyweights, including Banner Health and the Mayo Clinic, are expanding their Phoenix-area facilities, too. Banner Health has one project in the southeast valley in Chandler and another in the northwest valley in Sun City.

Its newest hospital is planned to open in November 2020 in Chandler and is spread across 18 acres. The four-story Banner Ocotillo Medical Center will include a Level 2 emergency room as well as cardiology, gastroenterology, gynecology, labor and delivery, imaging, intensive care, orthopedic and surgical services. The building will contain 96 licensed beds and 24 observation beds with a staff of over 65 physicians and 430 full-time employees.

Exactly 50 miles away from Chandler in Sun City, Banner Health is in the middle of building a new $106M, six-story emergency room and patient tower at Banner Boswell Medical Center, scheduled to open this fall. The new emergency room increases space to 56 beds total, and increases annual patient capacity to 60,000 from 45,000.

“We are Arizona’s largest nonprofit healthcare system, so we are constantly evaluating the growing healthcare needs across the state, not just in Phoenix,” Banner Health spokesperson Nancy Neff said. “We have responded with expansions, new builds, new partnerships and mergers and acquisitions to meet those needs.”

Just within Phoenix city limits on the north side of the valley, the Mayo Clinic is undergoing perhaps the most visible project, right off the highly traveled Loop 101 freeway off the 56th Street exit. The Mayo Clinic’s expansion will add an additional 1.4M SF, almost doubling the size of the campus, in a $648M expansion project that is scheduled for completion by April 2023.

The project will include a new six-story patient tower, a new three-story building for an expanded emergency department, a three-floor addition to the current building and expanded parking. A Future Health Solutions campus, a 150K SF collaboration with Arizona State, is being created adjacent to the Mayo Clinic.

“We call the city of Phoenix the frontier of medical collaboration and innovation because both the newcomers and the longtime residents are choosing this opportunity to expand,” Whitehead said.

There are now over a dozen other healthcare or biotech projects under development in Phoenix, including Valleywise Health’s 673K SF medical center at 2601 East Roosevelt St. The 10-story medical center is located next to the current medical center and is scheduled to open in late 2023.

The new tower will increase instructional resources at the state’s only public teaching hospital, while making facility improvements to the Arizona Burn Center and the Level 1 Trauma Center.

“After the Great Recession of 2008, we decided as a city that we could not just be built on tourism and growth anymore,” City of Phoenix Community and Economic Development Manager Chris Mackay said.

“We made a conscious effort then to attract the healthcare and medical biosciences industries because they are resilient industries that thrive regardless of the state of the economy. That investment is starting to pay off during these unfortunate times, and hopefully these innovative research opportunities can be tomorrow’s solutions to today’s medical problems.”

CORRECTION, APRIL 10, 2:46 P.M. ET: An earlier version of this story had the incorrect completion date for the Wexford Innovation Center. It has been updated.