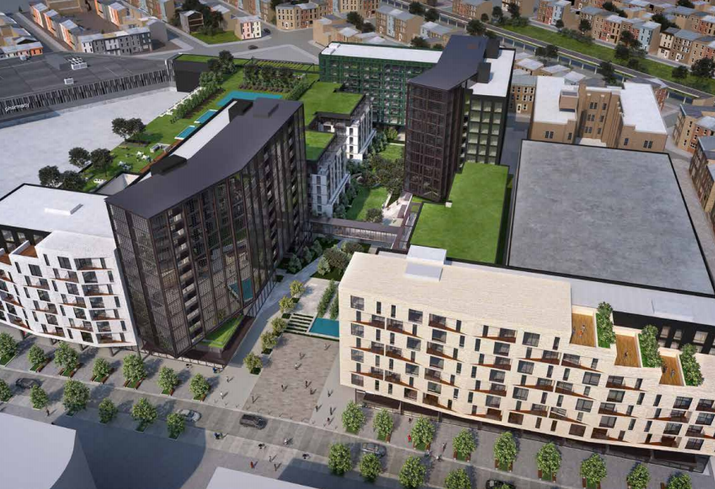 His company, Tower Investments, has submitted renderings and details for his sequel to the Piazza at Schmidt's (since renamed Schmidt's Commons) for the Civic Design Review hearing June 5. The project, called Piazza Terminal, will hold 1,197 studio and one-bedroom apartments split between eight buildings of varying height sitting atop 45K SF of retail.

Blatstein told Bisnow earlier this year that he sees Piazza Terminal as the infill development that he always wanted to take advantage of the density and value he helped build in the NoLibs neighborhood. With buildings ranging from seven to 13 stories, the density of his newest project will be on a scale the neighborhood has never seen.

Unlike the expansive, cement Piazza, the central courtyard of the Piazza Terminal will be narrow, filled with grass and plants, and open up to Germantown Avenue on the west and Hancock Street on the east. Across Germantown Avenue sits Schmidt's Commons, which Blatstein sold to a joint venture of Kushner Cos. and Oaktree Capital Management in 2013. To the north sits the Shops at Schmidt's, a grocery-anchored retail development Blatstein sold to the Florida-based Sterling Organization in 2016.

Post Brothers closed on the purchase of a controlling interest in Schmidt's Commons Friday, the Philadelphia Business Journal reports. The transaction was for $130M, the same price that Kushner and Oaktree paid in 2013. Kushner has now exited the property, while Oaktree's ownership status was not disclosed.

While Post Brothers looks to renovate the residential portion, add amenities and hopefully stabilize the high-turnover retail spaces, Blatsein will be raising something even bigger from the ground. He told the PBJ he is grateful for the change in ownership after criticizing the Kushner JV for mismanagement to Bisnow. 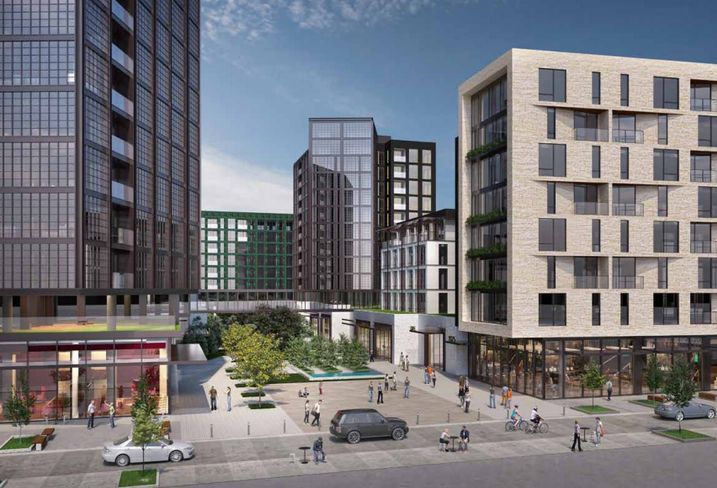 Tucked away in the Piazza Terminal development will be a six-story, 200K SF parking garage, with the first floor's 46 spaces dedicated for customers of the retail portion and the 463 spaces of the upper five floors for residents. All told, Piazza Terminal is set to contain 963K SF of development, 681K SF of which will be dedicated for residential.

Tower Investments will use a mix of materials to differentiate the design of the parking garage, two six-story buildings, three nine-story buildings and two 13-story buildings. With street-facing retail, the development will turn the southern end of Germantown Avenue from a gritty backstreet in the shadow of Schmidt's Commons into a dense, walkable thoroughfare.

The plans submitted to Civic Design Review, which can send Blatstein back for a second hearing but cannot make a binding decision, call for some of the retail portions to have outdoor seating, suggesting restaurant components.

The parking garage is planned to have a rooftop covered in plants, and at least one of the residential buildings to have an amenity area on the roof, including three pools, hot tubs, an outdoor salon, a yoga lawn, grilling areas and cabana beds.