Forget silver bells; North Philly is starting the holiday season decked out in platinum. Yesterday, we were at the opening of the eco-friendly, transit-oriented Paseo Verde, the first LEED for Neighborhood Development project in the US to receive the USGBC's highest cert. The $48M project, 18 months in the making and poised to revitalize its North Philadelphia neighborhood, was developed by local non-profit CDC Associacion Puertorriquenos en Marcha (APM) in a partnership with NY-based Jonathan Rose Cos. (Above, we snapped president/namesake Jonathan Rose in his Manhattan office.) The 206k SF project brings 120 mixed-income apartments and 30k SF of retail and office next to the busy Temple University regional rail stop (7,700 passengers daily, less if you don't count freshmen--and who does?). Green roofs, solar panels, and water gardens, as well as recycled materials, are key features of the new building. APM CEO Nilda Ruiz (center, flanked by Mayor Michael Nutter and Joann Rivera, a Paseo resident) says the project will not only enhance Philly's quest to become America's greenest city, but it aligns with APM's mission to help families achieve their highest potential. (APM has built over 300 low-income units in the neighborhood.) She says the project was made possible by Jonathan Rose Cos' expertise in New Markets Tax Credit funding; it also used Low-Income Housing Tax Credits and the City of Philadelphia's Housing Trust Fund. 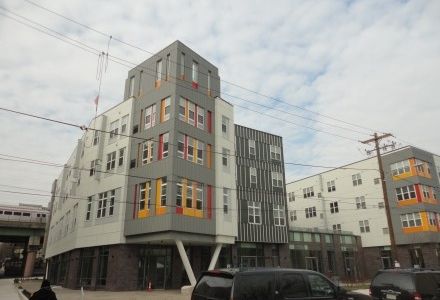