The air is again cackling with electricity in a revolutionary way in Philly, as the annual Greenbuild International Expo lights up. The big reveal Wednesday was the launch of LEED v4. 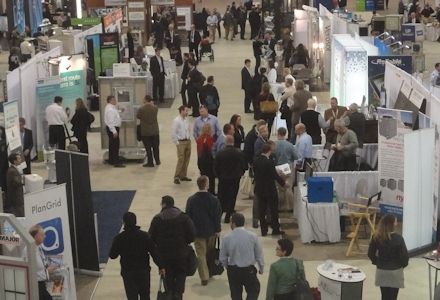 USGBC expects 20,000 in attendance at the PA Convention Center this week, with over 900 exhibitors. The theme of international people watching colored USGBC SVP Scot Horst's talk on the org's next steps for LEED. Keeping score is our nature, he said, and in a global economy, green building calls for a new standard to allow for greater comparison and cooperation. "What if we all stepped on the same scale?" he asked. (Rhetorically, obviously time to buy a new scale.) That is, why not create a single global measurement against which buildings can compare their energy performance with others? 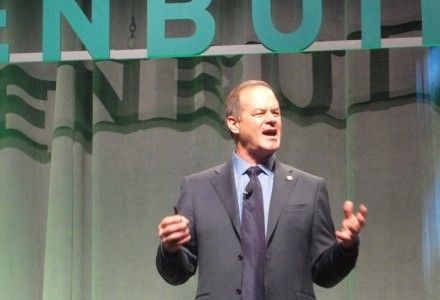 Scot likened buildings to living organisms with vital systems: Electricity is the nerves, waste management is the digestive tract, and so on. An integrated design process for creating buildings as a whole is one of the defining traits of LEED v4 (not to be confused with Led Zeppelin's fourth album, which can destroy buildings when played loud enough). Scot then unveiled the LEED Dynamic Plaque, assigning a numerical energy score based on five outcomes of performance. The plaque is still in beta, so expect a few tweaks along the way, but the measurement stands to up the ante on friendly competition across the 140 countries where LEED projects exist. 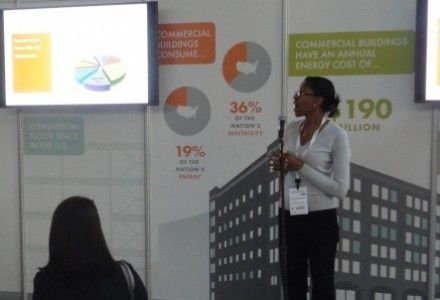 Representing its hometown, the Navy Yard's Energy Efficient Buildings Hub held informative sessions throughout the day at their Energy Lounge in the main registration hall. (Here, Erica Cochran presents on the Hub's findings on energy use in school buildings.) A collaboration between Penn State and the US Dept. of Energy, among others, the Hub is developing tools to cut energy consumption in half in commercial buildings, which account for 36% of all energy used in the US. At Greenbuild, they're also explaining the DOE's Commercial Building Energy Asset Score, sure to come in handy for commercial owners coming on board with the city's benchmarking law. 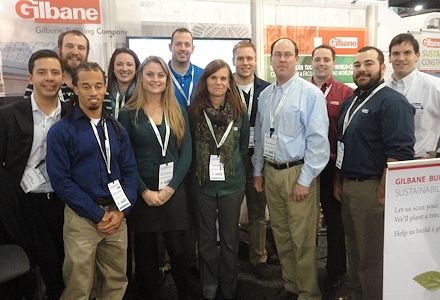 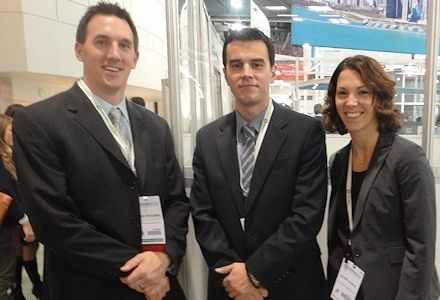 Lehigh Valley-based Lutron were the go-to guys at the conference for lighting solutions with an international presence. Lutron's dimming CFL bulbs and light control systems have been used around the globe, and the company holds offices in over 20 countries. They also co-sponsored (and their booth hosted) author and green building legend David Gottfried, who signed free copies of Explosion Green, his story of the founding of USGBC which is celebrating 20 years. Outside of a dog and inside a well-lit expo hall, a green book is a man's best friend... that's how Groucho Marx would have put it if he were there. 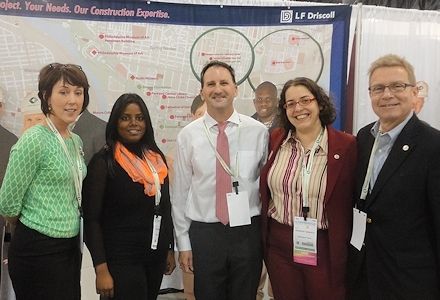 Legally, USGBC still isn't old enough to drink, but the folks from Structure Tone and Philly affiliate LF Driscoll were in cheerful spirits for the Greenbuild happy hour. (The cardboard cutouts behind them were chaperoning; snapped areÃ Trish Harrington, Sheela Indla, Dave Ransome, Jennifer Taranto, and Frank Renzler.) Driscoll's green cred literally towers over the rest: with daylight harvesting and water-reducing techniques, the Comcast Center became the tallest LEED building in the US after its completion. Just to outdo themselves, Driscoll built GlaxoSmithKline's new home at the Navy Yard, recently certified Double LEED Platinum. Jennifer says Structure Tone is hard at work in anticipation of LEED v4. 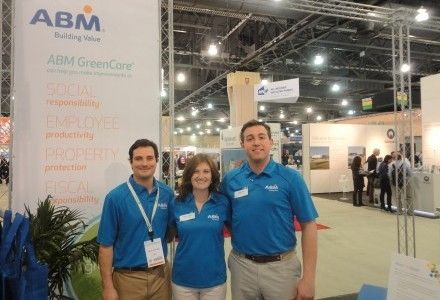 The gang from ABM (Chas Strong, Janice Areskog, and Burton Mills) gladly showed us their sensitive, sustainable side--as well as their really neat microfiber towels--and put in an enthusiastic word for EV charging stations in parking facilities. Through its GreenCare program, ABM puts clean, low-energy priorities into practice at its more than 360M SF of space that it manages. Among the local facilities ABM takes care of are Philadelphia International Airport, 10 Penn Center, and the Ryan Veterinary Hospital at Penn (you know they go the extra mile to vacuum out all that pet hair).