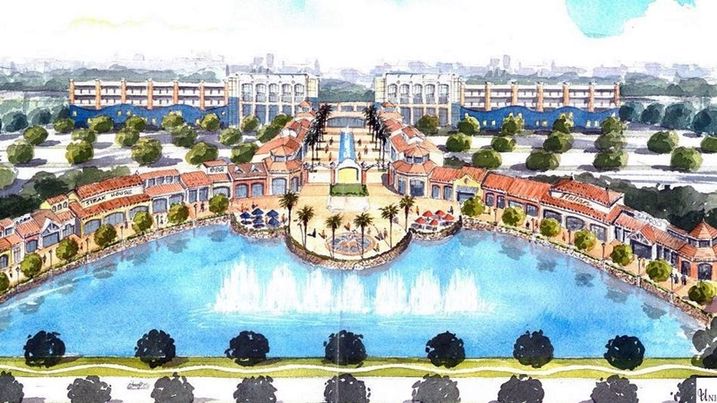 Unicorp National Developments unveiled plans recently for an 82-acre development, O-Town West, at the junction of Palm and Daryl Carter parkways, just off Interstate 4. With major residential and retail components, O-Town would be one of the largest projects in metro Orlando's tourist district in decades, necessitating a new interchange on the interstate.

Though focused on tourism retail, the development's 100K SF of retail would also include a grocery store, Orlando Weekly reports. The residential component would include 15,000 apartments in a number of buildings, as well as 300 to 400 single-family houses selling from $300K to $1M.

Many of the dwellings will overlook a recreational lagoon. That feature will be created by Miami-based Crystal Lagoons, which is at work on a similar lagoon in Lake Nona.

The tourist retail will be called Boardwalk at O-Town West, featuring to-be-determined restaurants and retailers, but ones that are new to the Orlando market. Some of the restaurants will overlook another water feature with a large fountain show that Unicorp said will be "Bellagio-style," referring to the elaborate fountain show off the Strip in Las Vegas.

Unicorp also said some of the retail tenants will be one of a kind, as is the case at the company's I-Drive 360 development. There will be a 600-space parking structure at O-Town West as well.

Confirmed! You are subscribed to the Bisnow Orlando E-Newsletter.