The Future of Anaheim panel at Bisnow’s recent Orange County State of the Market event focused on projects in Anaheim, which rezoned an 820-acre industrial district in 2004 to what is now known as the Platinum Triangle to allow high-rise residential and mixed-use development. Developers are expected to pour $1.2B into projects here over the next decade, including a $500M mixed-used development adjacent to the stadium by China-based LT Global Investment, a subsidiary of Beijing developer Lerthai Commercial Real Estate Group.

At build-out, this dense district is expected to have 28,000 residents, 19,000 apartments and condos, 14M SF of office space, and 4.7M SF of retail and hotel space. Our panel moderator, locally based Place Works chair/president Randy Jackson (pictured), who created Anaheim’s master plan, opened the discussion by asking national multifamily developer JPI/TDI Cos VP Patrick Pine why his company is developing in Anaheim and what he thinks about OC’s multifamily market going forward.

Unemployment in OC is about 4%, and the Platinum Triangle is a strategic location with dynamic rent growth due to the healthy nature of the economy, Patrick said. His company has two projects in the works, with a total of 15,000 apartments. Patrick said, “Long term, we believe the Platinum Triangle will be a vibrant, walkable community with lots of retail amenities in an area of exceptional job growth."

He said mass transit would be a key factor in the area's success. The Anaheim Regional Transportation Intermodal Center (ARTIC) at Angel Stadium is served by both Amtrak and Metrolink commuter trains, making it possible for people to live here and work in LA, he said.

“I don’t think we’re going to fall off a cliff,” Randy Jefferson responded, “but everything that goes up, comes down, and it will definitely come down." He said his firm believes in mixed-use and wants to be a part of urbanizing the Platinum Triangle, acting as a catalyst for what can happen around the stadium in the coming years.

“Strategically, the Platinum Triangle is halfway between Downtown LA and the center of Orange County—that’s a tremendous opportunity,” he said. With the amount of development underway and in the pipeline, the demographics of the district will change significantly in the near future. “We’re excited to be pushing that forward.” 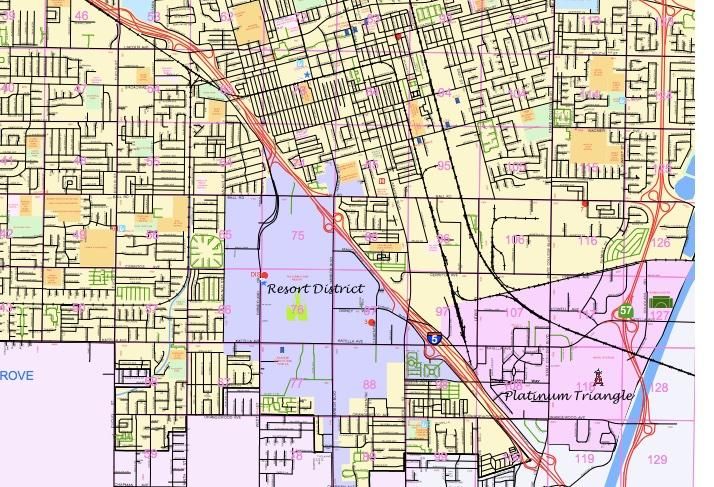 Anaheim is second only to downtown LA for planned luxury hotels, Alan said. Three 4-diamond hotels are planned. These hotels are very difficult to build and finance, he said. "The city of Anaheim probably did a smart thing in terms of the transient-occupancy tax rebates that are beginning to incentivize these developers,” he said.

With all this anticipated development and obvious slowdown in growth there is concern of overbuilding, Alan said, but he believes developers are just playing catch-up. “Right now we’re basically making up for what we haven’t built over the last four or five years."

"Overall I think it’s going to be very strong for Anaheim,” Alan added. He said people attending conventions will be more likely to stay longer in Anaheim with the addition of higher-end hotels.

Snapped here is our Maggie Whitney, Bisnow account manager, who kept the show rolling on schedule.

Anaheim Mayor Tom Tait weighed in, addressing the city’s transportation issues. He said the goal is to reduce the number of cars on the road, which would also free up some parking lots for development.

Tom is opposed to a proposed streetcar plan from ARTIC to Disneyland, because it would eat up all the city’s transportation funds and only serve the needs of tourists, not workers commuting to Disneyland or anywhere else in the city.

Steel rail transit costs $100M per mile to build, Tom said. He suggested transportation funding would be better spent on various mobility projects that serve the whole community, as well as visitors. Tom said Anaheim is spread out with no obvious corridors for light rail, but ideas like a bike-borrowing program and shuttle service could move people between ARTIC, Disneyland and other areas of the city to neighborhoods and hotels.