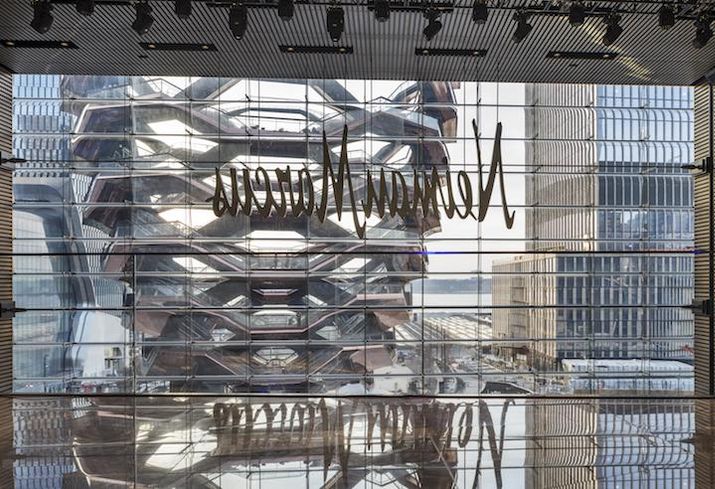 Courtesy of Francis Dzikowski for Related-Oxford
View of Vessel from Level 5 at The Shops & Restaurants at Hudson Yards.

Luxury department store Neiman Marcus is officially shutting its Hudson Yards location, a little over a year after its flashy opening.

The luxury department store is also closing stores in Fort Lauderdale and Palm Beach, Florida, and Bellevue, Washington, CNBC reports. Neiman filed for Chapter 11 bankruptcy reorganization in May, and put four leases on the market earlier this month.

“A physical location in Hudson Yards is no longer an ideal space for us, given the preponderance of restaurants and future office space in that mall,” a spokesperson told CNBC.

The retailer made the plans to shut the store public in a court filing Friday. The location spans 188K SF and was the first Neiman Marcus in New York City.

“We are always assessing our store footprint to ensure it is optimal to enhance revenues, overall profitability, and our integrated retail strategy," the spokesperson said. "These store closures will help ensure the continued long-term success of our business and underscores our unrelenting focus on providing unparalleled luxury experiences and engagement.”

A representative for Related Cos., which is co-developing the Hudson Yards megadevelopment with Oxford Properties, said the departure “opens up a great opportunity to create incredibly attractive office space."

Rumors about the future of the space have been swirling since it became public that Neiman's was in trouble. Last month, there were reports that Facebook was looking to lease the three floors that would be left vacant, adding to its commitment to occupy 1.5M SF across three other office buildings at Hudson Yards.

Another issue for Related is some retailers' leases at the Shops at Hudson Yards are tied to Neiman's presence; Related CEO Jeff Blau told Bisnow last month that only a "handful" of tenants have co-tenancy with the department store anchor.

"I think that people are less dependent upon those anchor stores than they were in the past," Blau told Bisnow. "I think a restaurant or a fitness club or a Whole Foods could be as much of an anchor as a department store used to be. And I think other tenants recognize that change. To the extent that we do have any co-tenancy issues, I think the economics of the underlying business will speak for themselves; if they were doing well there — and as I said, most of the tenants were — then I don't think it's going to be an issue."