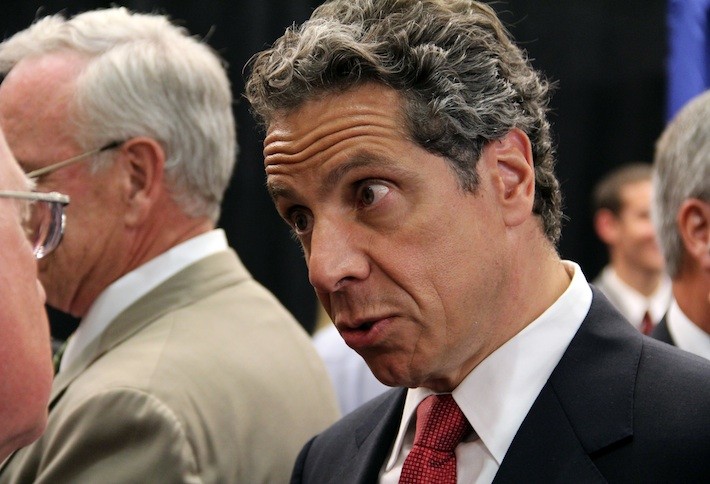 The political fallout from the framework legislative deal announced Tuesday in Albany should continue well into the summer. Real estate industry players will focus on the fates of New York City's rent regulation guidelines and the polarizing 421-a affordable housing tax credit program. The compromise measure brokered by Governor Andrew Cuomo and legislative leaders extended both: rent regulations by four years, 421-a for a half-year.

The extention of the rent regulation guidelines left in place the controversial vacancy decontrol provision, whereby a unit hits the open market once its rent tops $2,500. The result was a major embarrassment for Mayor de Blasio, who had been vocal in his push for the need to reform vacancy decontrol in order to protect the city's dwindling stock of about 1M below-market rentals. And with that was written the latest chapter in the ongoing story of the Cuomo vs. de Blasio competition.

The expected political sniping followed. In an article in the Daily News, a City Hall source pointed a finger (predictably) at Albany. "It's more about their dysfunction than anything," a source told the paper. "... It just reflects their refusal to deal with issues that matter."

And this from an Albany source, according to the News: "Maybe if he spent less time running around the country attempting to be relevant in the national conversation he would have achieved what he wanted in his own backyard."

Here's a sampling of the further industry chatter:

Bob Knakal, the chairman of New York investment sales at Cushman & Wakefield, said: "We'll have to see what the details are." Knakal, an often outspoken commentator on the industry, declined to elaborate on the extensions at this early juncture. "It's not surprising [news] about rent regulation," he said. "With 421-a, there's no shock that it will be kept around in some capacity. But we need details. It could be good. It could be horrible."

“The complexity of addressing the 421a tax abatement program is not something to be rushed," Belkin said.  "Extending 421a for six months allows the many benefits of the program to continue, while allowing the legislature time to carefully consider and meaningfully address the multi-faceted aspects of the program.”

"The details of the rent regulation bill are still emerging," he said. "But it appears to be tinkering around the edges, at best. Rent control came into existence 70 years ago to temporarily assist GI's returning from World War II. We are seven decades into a 'temporary' housing emergency. At some point it needs to be recognized that rather than addressing housing for those truly in need. New York's form of rent regulation is really tied to longevity and luck."

Harsher language reigned on Twitter, where most pundits and pols chalked up the recent compromises as decisive losses for de Blasio. Councilmember Mark D. Levine, Democrat from District 7 in Manhattan, tweeted: "Albany's results: no Dream Act, no min wage increase, no 421a reform, no end to vacancy decontrol, no campaign finance reform, etc."

Tenant advocates also called the framework deal out for shoddy craftsmanship. The Observer notes that they took particular umbrage with the separation of rent regulations and 421-a, which they fear will hobble the passage of future pro-tenant legislation. Mr. Cuomo was unfazed while addressing complaints from the Tenants Political Action Committee and likeminded groups, saying that when it comes to affordable housing law, tenant advocates have "never been happy."

Are you a real estate industry pro who wants to sound off on the big news from Albany? Get in touch with us here.