The city’s Rent Guidelines Board voted late Monday for a rent freeze on rent-regulated apartments with one-year leases—the first time in its 46-year history that it had taken such a step, according to reports. 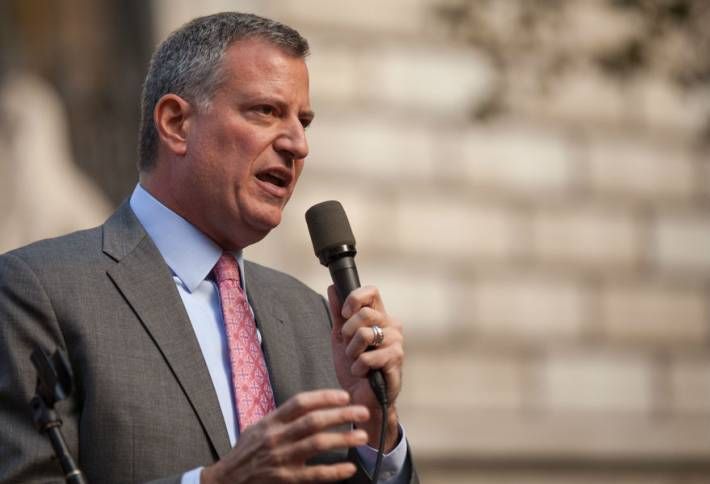 In the “Tale of Two Cities”—Mayor de Blasio’s version—an important chapter was written on Monday night. New York City’s Democratic mayor kept a promise he made in 2013, back when he was campaigning to run the city and using the title of Dickens’ 19th century classic as a slogan for his central campaign theme of addressing the widening gap between the haves and the have-nots in NYC.

Hundreds of tenants were on hand to witness the vote—the Wall Street Journal reported that some 900 people filled the Great Hall at Cooper Union. They were euphoric, erupting in applause. The landlord lobby was not pleased, but the board granted them a concession: rents on units with two-year leases would rise by 2%.

The board’s vote came a week after a compromise deal in Albany extended NYC’s rent regulation laws—which cover slightly more than 1 million apartments—by four years; they had expired on June 15. The legislature also raised the vacancy decontrol threshold—the rent at which a unit can be moved onto the open market—by $200, to $2,700.

The board found that median income for a rent-regulated tenant was $40,600 and that median rent was $1,200, amounting to a rent-to-income ratio of 36.4%—north of the 30% sustainability threshold recommended by economic experts, according to DNAInfo. The board voted 7-2 (all nine members were appointed by de Blasio) in favor of the compromise because it found that operating costs on regulated units increased by just .05% this year, aided by reduced fuel costs; but that next year costs were expected to rise by 4.2%.

“The 2% increase is warranted for two-year leases to protect owners should unanticipated increases in costs in the coming two years arise,” board chairwoman Rachel D. Godsil said, according to DNAInfo.

But the Rent Stabilization Association, which represents 25,000 landlords in NYC, was more concerned with the single-year freeze, which it said would spur building owners to devote less money to maintenance.

“A rent freeze on the surface may sound pro-tenant,” Joseph Strasburg, president of the association, told the New York Times. “But the reality is landlords will now have to forgo repairing, maintaining and preserving their apartments, which will trigger the deterioration of quality, affordable housing de Blasio pretends to care about.”

He blasted the vote as one that was "politically driven" and meant to "carry out de Blasio's campaign promise of two years ago."

For de Blasio, the outcome was indeed key not just because it allowed him to make good on his campaign pledge; it also gave him a solid local recovery following a painful end-of-session lobbying effort in Albany earlier this month. De Blasio had pushed for reform of the vacancy decontrol provision, arguing that greater safeguards are needed to protect the city’s dwindling stock of rent-suppressed units. The $200 increase to the threshold was far less than what he was seeking. The GOP stronghold in the Senate blocked his political drive. He also had pushed for permanent extension of mayoral control of city public schools, but got just a one-year add-on, adding to his frustration—and fueling a round of unflattering press.

"The decision by DeBlasio (through the board that he unilaterally appointed) to freeze rents may earn him short-term gratitude from his political base, Cayuga Capital principal Jacob Sacks told us. "However, it is going to have an extremely chilling effect on investment in and creation of new rental housing units, and within a few years will lead to dramatically higher market residential rents as supply fails to expand." [DNA] [NYT]