When you think of creative office hubs, what comes to mind? Probably not the banks of the Hackensack River. 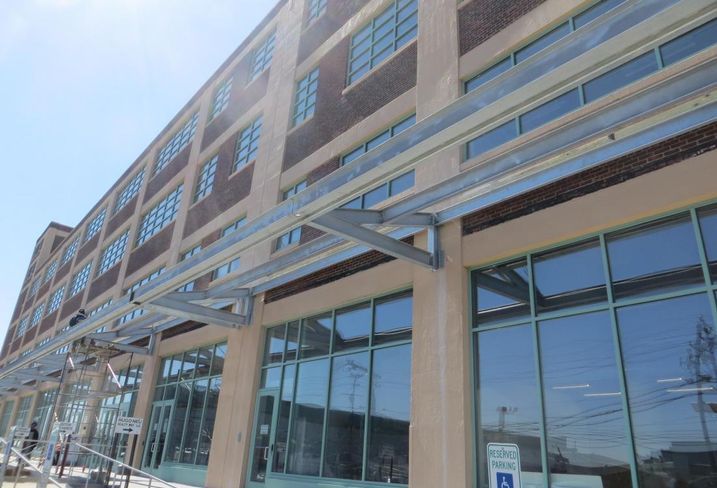 Welcome to Kearny Point. Developer Hugo Neu is transforming this sprawling, 130-acre industrial park into a mixed-use hub for creative office and light manufacturing tenants, while retaining its use as a center for industrial and shipping-related uses. The site's Building 78 (above), a former shipmaking facility, is the first to get a facelift. The developer has sunk about $100/SF into upgrades for its 160k SF of office and creative space.

Hugo Neu CFO Steve Nislick, the former CEO of Edison Properties, was excited enough about the project that he came out of retirement to help get it off the ground, and took an equity stake in it. 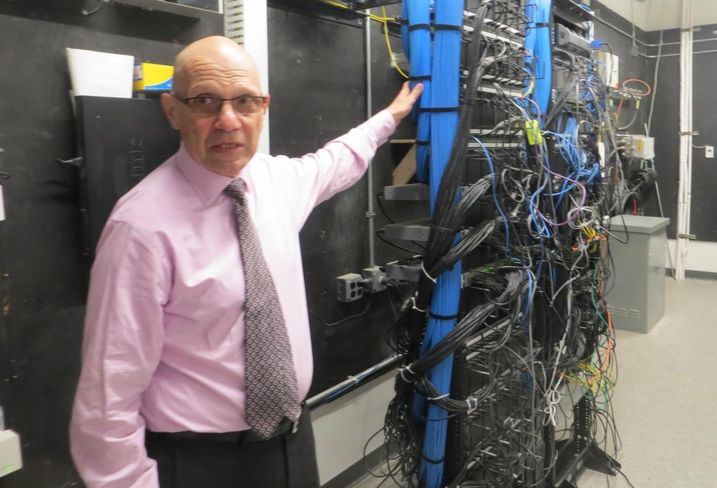 Steve (snapped at one of the site’s IT control hubs) likes to think of it as analogous to Brooklyn’s Industry City, if it had plenty of parking and individually climate-controlled offices. But will creative office tenants schlep out to the southern end of Kearny, to an area bounded by brackish rivers and wetlands, wedged between Jersey City and Newark?

If you think it’s just about a schlep from Manhattan or Brooklyn, Steve tells us, you’re missing the point.

“There is no office space of this type right now in this area,” he says.

That may be true for now, but last year WeWork got $59M in subsidies through the Grow New Jersey program to open a space in nearby Jersey City. To Steve, it’s just a marker for how much demand there is across the Hudson for flexible workspace.

Office space at Kearny Point is a mash-up of small offices of up to 2,500 SF renting for around $20/SF, and shared office space similar to what you’d find in a co-working space, with “hot desks” starting at $150/month. 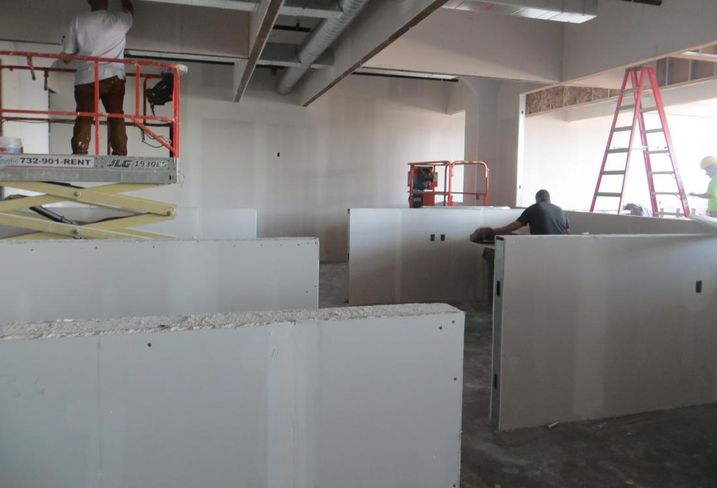 When you enter the space being built out in Kearny Point’s Building 78, it looks a lot like a typical co-working space—just with a lot more sawdust everywhere. There’s an open floor plan, wooden partitions and desks arranged where they can get natural sunlight.

What’s unique is that there’s no middleman. Hugo Neu is taking on the risk of signing up tenants in the flexible space portion of the project directly, with two months’ security deposit and a credit check.

At the other end of the office user spectrum, Steve tells us there’s a tenant, an entity we’ve all heard of, eyeing a 180k SF spread. 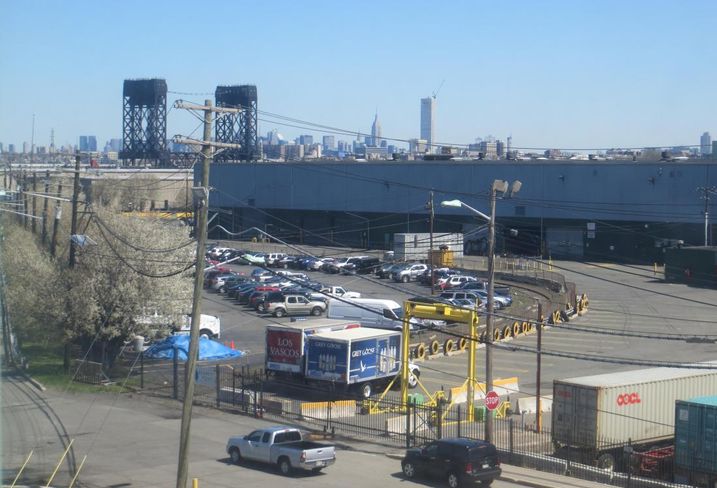 Director of leasing Nick Shears says the bulk of the demand for the creative office space, of which about 40k SF has been taken since leasing started in November, is coming from folks who live in New Jersey.

Most tenants drive, Steve says, lured in part by the free parking, but plans are being drawn up to either run a shuttle bus to the nearest PATH station, a little over two miles away at Journal Square in Jersey City, or work out a deal with a ridesharing app like Uber for carless tenants to get discounted trips to and from the site. 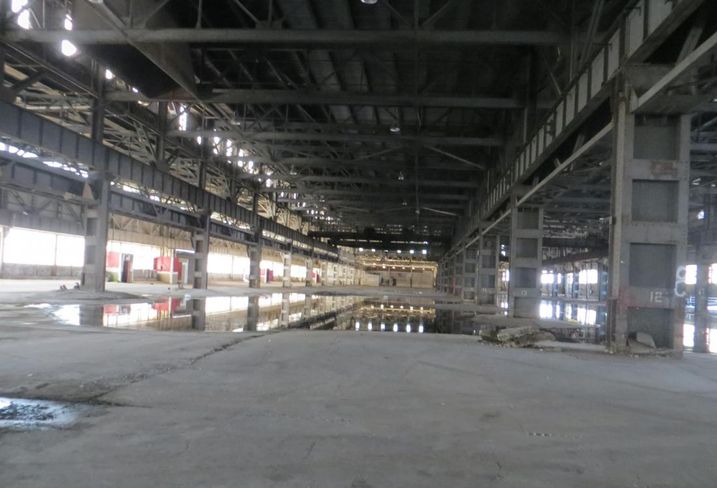 According to Steve, the full project’s timeline for completion is about five to six years out. It will involve building interior floors within two steel-frame, hangar-like industrial buildings on the site, each with massive 250k SF floor plates.

Asked how the site’s lack of street life and retail might impact its attractiveness, Steve’s response typifies the ethos at Kearny Point: “We’re building that stuff,” he says.

This summer, a café with a liquor license is scheduled to open, along with a rooftop deck on Building 78, currently the only building on site taking office tenants. And he says as the site grows, the possibility of a large food hall is being considered.

The $64,000 question remains: Will the project succeed? Kearny mayor Alberto Santos is optimistic. But he tells us that about two years ago, the developers approached the town about rezoning the site to be designated an area in need of redevelopment, a request the town has since approved.

The deal allows for a payment to the town in lieu of local property taxes. It's structured such that if revenues don’t match expectations, Hugo Neu won’t be hit with a full assessment.

If it turns out that demand for the kind of office space at the project softens, there’s this: The Port of New Jersey, just a few miles from the site, is poised for a big spike in traffic in the coming years as the soon-to-be-completed widening of the Panama Canal makes way for container ships with far greater capacity to come straight to the East Coast from Asia, instead of docking in Long Beach and putting their loads on trains for the East Coast. Most of the site’s industrial tenants are in port-related industries. 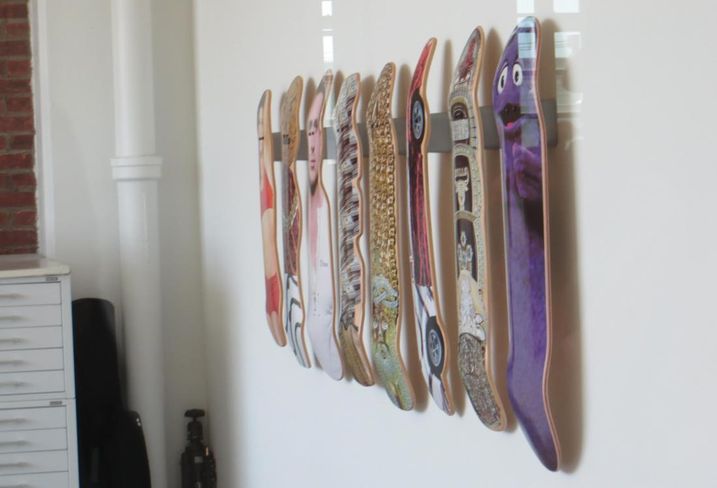 But so far, the creative users are coming. There’s a cigar wholesaler, a boutique fashion storage business, a commercial screen printer, several photographers and an e-commerce company in Building 78 so far, to name a few.

Patty Lapinski of Keith Lapinski Studio, a commercial photography studio, says price was a big factor for her and her husband, Keith. They’d been paying $65/SF for temporary studio space in Manhattan, and moved into their space in Building 78 on March 1. “I was a little skeptical because it’s kind of in the middle of nowhere,” Patty tells us. “But we love it here.”