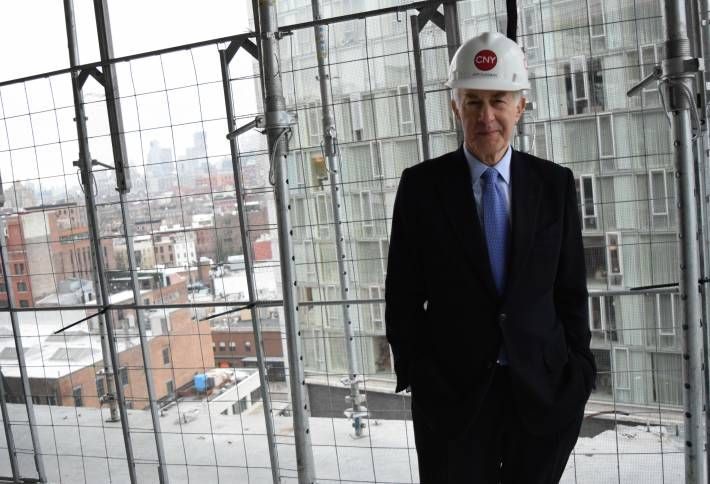 The whole thing’s being done spec, but Jeff (who we snapped above) says the location will make it a sought-after address. The 10-story, 114k SF building sits on a lot that’s smack against the High Line (part of the ground-floor retail space will actually be underneath it), a block from the Standard Hotel, and two blocks from the new Whitney Museum, which opens on May 1. For the office space, there’s been interest from financial services and venture capital firms that’d take full or multiple floors. (Jeff says he wouldn’t be too surprised if a law firm grabbed a floor.) 837 Washington, caddy-corner, picked up Samsung for both its retail and office space last summer. Jeff says he wouldn’t be surprised if a tenant saw the space working for something like that. 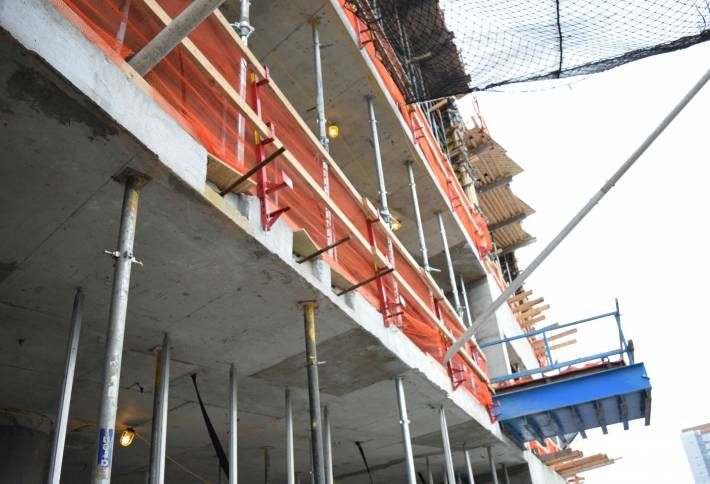 Looking up from the ground at 860 Washington.

The builder hasn't yet seen as much interest in the 11k SF retail space, which Cushman & Wakefield’s Joanne Podell is marketing as a flagship space. “Retailers want to know what they’re getting before they commit,” Jeff says. And that’s only been possible since March, when construction reached a point where prospective tenants could tour the space. Jeff says the windows on the second floor that face the High Line will be "like a Times Square billboard"—although patrons will have to go downstairs and enter through the ground-floor entrance. 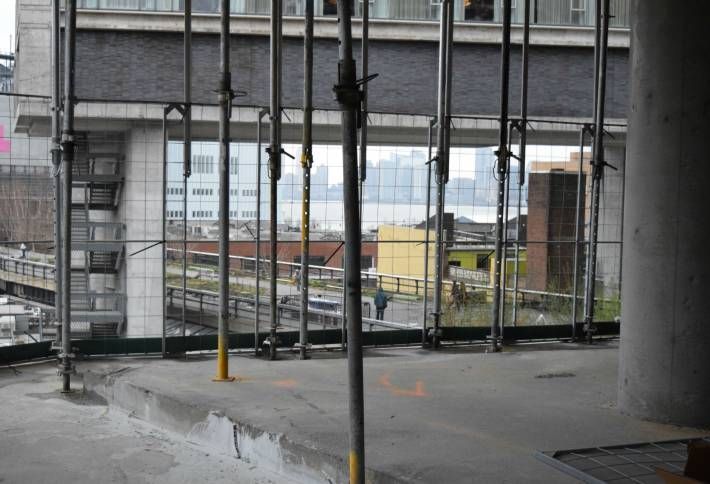 We snapped the view through the "gap" in the Standard Hotel from 860 Washington's second floor.

The Romanoff family is the site’s longtime owners, and its former use was as a brine supplier for the packing houses the area owes its name to. PGP came onto the project in late 2012, after Romanoff Equities had it designed by James Carpenter. Once the office floors are built out, they’ll be raised with heating and electrical systems under the floor and the ceilings will stay raw. An office sub-submarket has been slowly emerging in Meatpacking, with conversion/additions like 837 Washington and 340 West 15th St. Last summer, the current Prince Lumber site on the corner of 15th Street and 8th Avenue was picked up by Vornado and Aurora Capital Associates, which plan to build an office building there. Oh, and there's also this company called Google that has an office nearby. 860 Washington will see its first tenants by Q1 ’16.