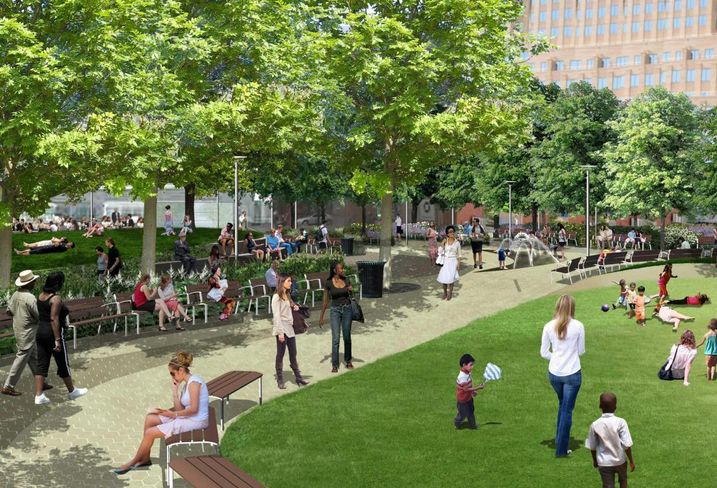 JEMB Realty is partnering with Forest City Ratner to develop the 505k SF One Willoughby Square, a boutique office tower in Brooklyn.

Located at 420 Albee Square, the building will feature a façade with integrated glass, pre-cast panels and two setbacks, which creates the illusion sections of the building are floating. And, at 36 stories, it’ll provide 360-degree sightlines of New York Harbor, the Lower Manhattan skyline and Brooklyn.

As developer and minority partner, Forest City will take an equity stake in the project, which was announced late last year as part of the city's efforts to make Downtown Brooklyn the anchor of the Brooklyn Tech Triangle.

The tower will be near a planned 700-space underground parking garage and the one-acre Willoughby Square Park. The park—pictured, which will cost more than $100M in public investments—will be considered a building amenity.

JEMB bought the lot—totaling 120k SF of air rights and 3k SF of land—for $15.5M in November. Construction for the tower will begin in Q4.

There’s no set timeline for the park, but the project recently moved forward when the city submitted plans to demolish an office building at 217 Duffield St, which it bought for $23.5M in 2008.