Behind The Numbers: A Breakdown Of NYC Office Pricing

Historically, Midtown has been known to offer some of the highest-priced office space in the city. Yet, in the midst of this average, ($127 per SF, as of December) "we see huge distinctions based on small changes in location," Peter tells us.

While Park Avenue sits close to $100 per SF (see map), just a few blocks east the price drops to under $70.

The most dramatic display of disparity comes from the area by Penn Station vs. Plaza—close to a 50% difference. "You can barely get a 10% price difference in all of Midtown South," he says.

Meanwhile Midtown South is filling up. Quickly. January availability dropped to 7.9%, the lowest level in this market since 2001, and the amount of SF in the area has grown 25% since then.

Low availability has driven pricing—Q3 2015 was the first full quarter to see average asking rent top $70 per SF and the number continues to hold—$70.40 per SF as of Feb. 1.

Midtown South remains a hot market—and investors continue to notice. Case in point, Jamestown, an active Midtown South investor, is on the verge of buying a 49% stake in two Midtown South office towers, valuing the pair at $1.15B.

"Despite the (relatively) big distance between the neighborhoods, cost stays consistent," Peter says. "From as far west as Chelsea to further south in Tribeca and looking east to Park Avenue South, there's a lot of ground to cover when looking at space, but prices aren't varying that much," he says.

"In Midtown, we talk about Avenue addresses being really important," Peter explains of the appeal of places like Park Avenue. "In Midtown South, there's more of a homogenous product—and location factors less into the decision-making process."

Moving Downtown, a different pattern starts to emerge. While product is diverse, inventory comes down to two categories, Peter tells us.

"You either have high-end luxury or basic pre-war," he says. "There's been a fair amount of new development or redevelopment Downtown—WTC and Brookfield Place. It's this new diversity in product that creates the price disparity. It's hard to find a middle Downtown," Peter says.

The number of tech employees Downtown is up 71% over the past five years, as companies look for alternatives to Midtown South's increasing prices.

"We always had a big disparity between Midtown and Downtown," Peter says. "But nowadays, most of the good deals are gone as Downtown begins to heat up."

After $30B in public and private investments, the neighborhood has three times the number of residents it did on 9/11, up to 60,000. Of course, the addition of swanky new luxury buildings, like Silverstein's 82-story mixed-use tower at 30 Park Place, helps with that.

"If you asked me to find you space in the low $40s three years ago, I would've had a lot of opportunities for you," Peter says. "If you ask me now, there are a very, very select few."

Brooklyn used to be attractive because it was close to Manhattan—now the borough is cool in its own right. The Brooklyn market is still trying to figure itself out—developers are on the hunt for the next hot neighborhood. "They're trying to find the sweet spot," Peter says. 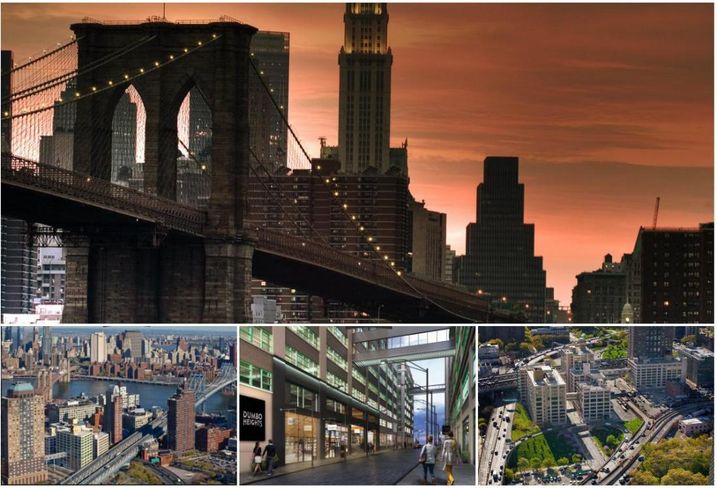 DUMBO used to be that sweet spot, but the ship of good value has long sailed. "Those days are gone," Peter says. A perfect example—at Dumbo Heights, a 1.2M SF mixed-use complex owned by a partnership among Kushner Cos, LIVWRK and RFR, prices have already surpassed many parts of Manhattan.

With activity trickling down to other Brooklyn neighborhoods, areas like Red Hook and the Navy Yard are prospering and developing their own identities. People no longer care about proximity to Manhattan, Peter adds.

"Companies that are in Brooklyn are deliberately in Brooklyn," he says. But the area that will emerge as the "next DUMBO" still remains unclear. "The opportunity is up for grabs," Peter says. "How it unfolds will be interesting."