Inside The Supertalls: 111 West 57th Street

There are several supertall towers (taller than 984 feet) on the rise in NYC, and we’ve been taking a look at what it takes to change the Big Apple’s skyline. Today, we’re taking a look at JDS Development Group and Property Markets Group’s 1,438-foot 111 West 57th St.

Setting Up The Dominoes 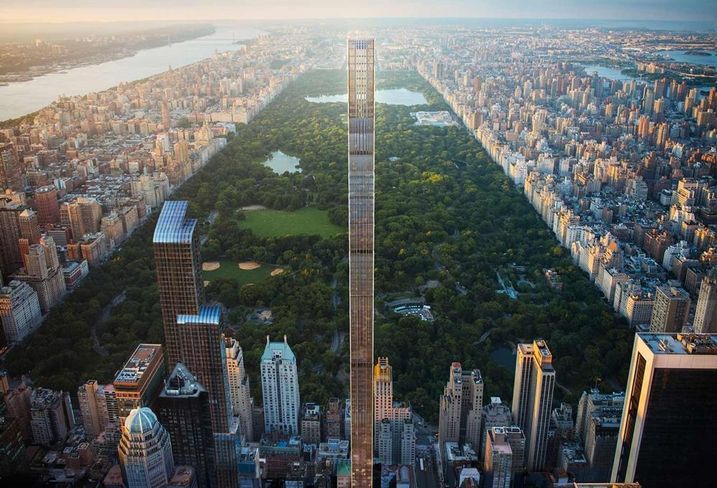 JDS owned a vacant lot adjacent to the Steinway Building, and filed plans for a CetraRuddy-designed, 680-foot-tall tower. Partnering with Kevin Meloney’s Property Markets Group—which worked with JDS before on the Walker Tower—JDS changed plans after the 247k SF, 16-story Steinway Building became available. JDS Development CEO Michael Stern later admitted he was glad the original design never got underway, as it was inefficient.

Buying the Steinway wasn’t a simple process, as Wexford Capital owned the fee interest and Steinway owned the leasehold, both of which had to be acquired. The JV also had to secure financing, which was provided at the last minute by Annaly Capital Management with a $230M loan.

After clearing the site with the Landmarks Preservation Commission, the JV had to get the site’s 12 tenants—including Steinway—to vacate the property. Steinway received a short-term leaseback, but others had to be bought out or waited on until leases expired.

Getting The Ball Rolling 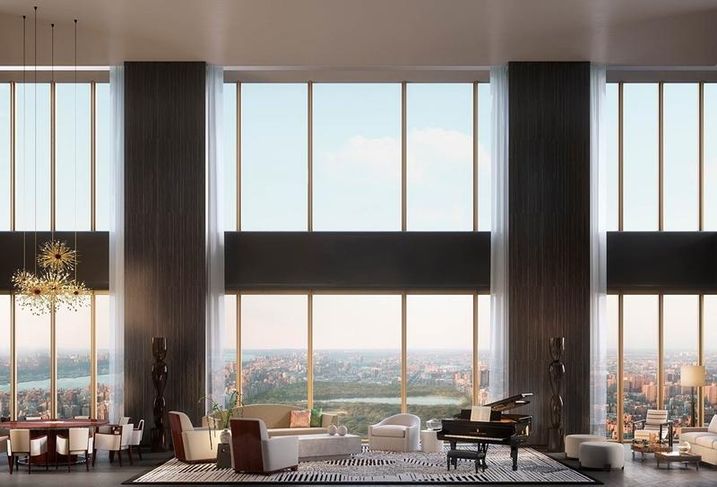 Some expressed surprise at SHoP’s involvement, as Stern insisted the tower would have a 1920s-inspired design, something SHoP isn’t known for. (In fact, SHoP principal Vishaan Chakrabarti channeled Karl Marx by calling contextualism “an opiate for the masses.”) When explaining his choice, Stern said he adored SHoP’s boundary-pushing culture and the firm’s work on the Nets' arena.

New plans submitted in 2013 bumped the tower to 1,200 feet, with 74 stories (six of which would be retail) and 100 units. That  changed to 45 full-floor apartments and changed again to its current status of 82 stories with 60 units. Although excavation and internal demolition of the Steinway Hall started in 2014, the tower wasn’t officially approved until January 2015.

In May 2015, the development’s majority investor—Ambase Corp—limited its financing and even began discussing reducing its stake after being told by Maloney that the project was reportedly “significantly over budget and delayed.”

Ambase later sued the developers, asserting the two diluted its ownership with a mysterious LLC and made decisions without its approval. The firm is seeking $105M in damages.

JDS and PMG secured a $725M construction loan from AIG and Apollo Global Management, which helped jump-start the project. 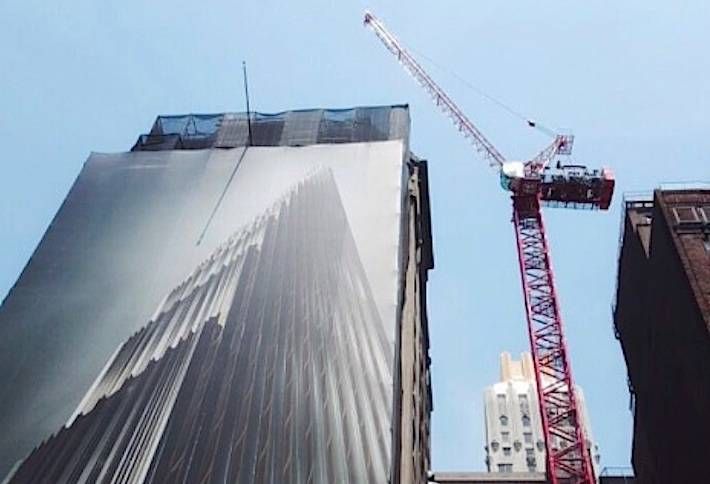 During the construction process, JDS has been using a 220-foot freestanding crane, the tallest in NYC history.

JDS has come under fire from the Building and Construction Trades Council for using nonunion labor and allegedly not giving workers proper safety training. Stern was surprised by the criticism, having worked with nonunion workers before on larger, more expensive projects. 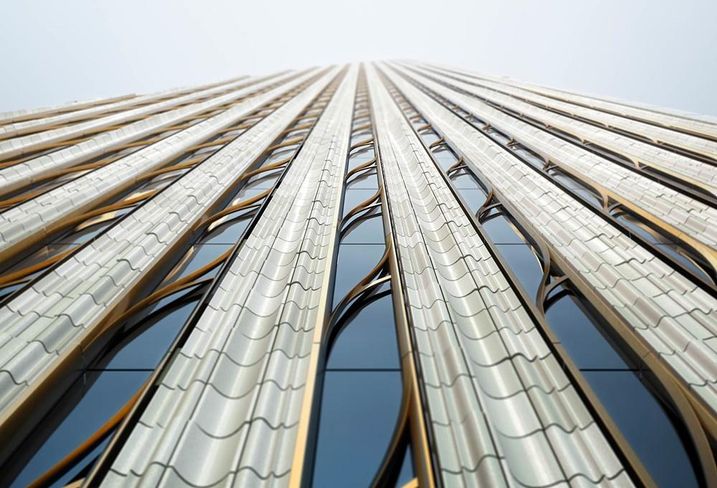 To compensate, the tower will have an 800-ton-mass damper to keep it stable in the face of high winds or a seismic event. JDS Development principal Simon Koster said the tower is structurally sound without the damper, but its implementation was for occupants’ comfort.

It also utilizes terra cotta panels and bronze latticework (pictured) on its east and west façades. The north side of the tower will be flat and vertical, while the south side will have a series of stepped setbacks that eventually thin out, creating the impression that the tower is disappearing into the sky. That’s the origin of the tower’s nickname, “The Stairway to Heaven.”

Although Stern said the narrow design was mainly based on the lack of available land in desirable parts of NYC, SHoP founding principal Christopher Sharples called the small footprint a callback to Jazz Age towers. 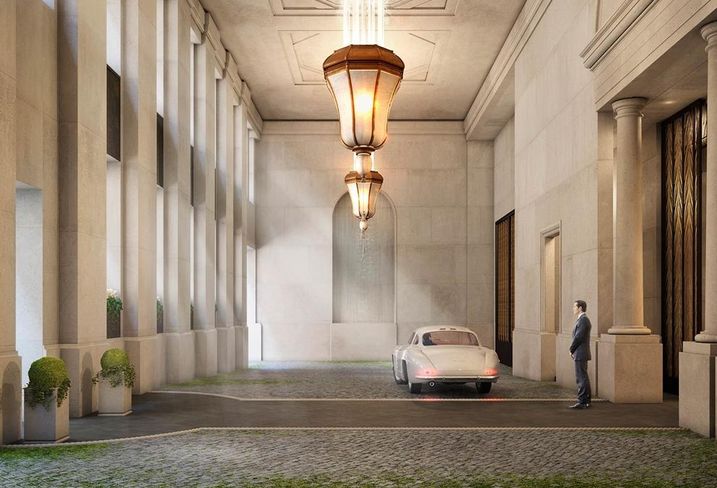 The tower will incorporate the landmarked Steinway Building, which has its own long and colorful history. Stern wants to complement the landmark without “mimicking it in a disingenuous way.” Twelve condos will be built into the base, as well an ornate showroom. Whether pianos will still be sold at the tower is unknown, but unlikely.

The tower will also have a recital hall paying homage to the Steinway Hall and a porte cochere (pictured). According to JDS, the tower will have full-floor and duplex apartments, all of which will have 360-degree views.

There will also be 54k SF of commercial space. Originally planned to be a hotel, the space will now have retail on its first cellar level, the first floor, and the third and fourth floors. The fifth floor will have offices. 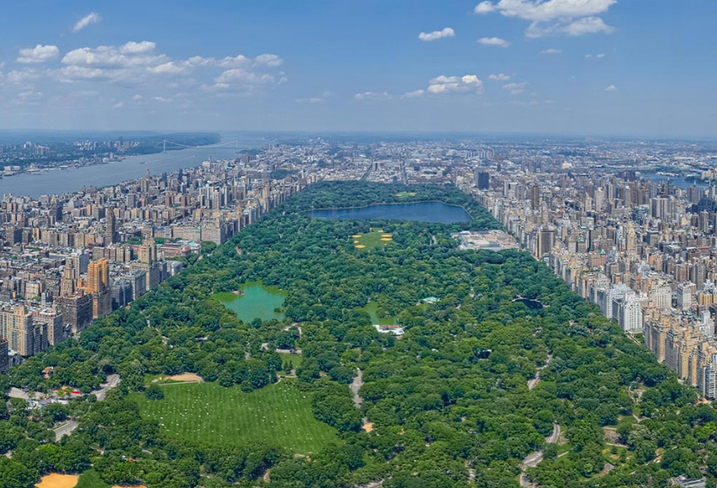 Like its floor count, pricing for the building’s ultra-luxury condos has fluctuated, but will most likely start at $14M and top out at $58M.

Stern says the prices are justified by the unobstructed views of Central Park (pictured) and are the only way supertall towers can be economically feasible, but another developer said he didn’t “understand [Stern’s] economics.”

Earlier this year, JDS and PMG halted public marketing and pushed back sales a full year. The decision was supposedly made because the developers believed they’d have a better chance of getting desired prices when buyers didn’t have to wait three years before occupancy. The move was still a surprise to some, especially considering the tower has a sales gallery on display.

The developers are confident the luxury market will recover by the time the tower’s completed in early 2018, projecting a $1.45B sellout. A Miller Samuel analysis, however, predicted that Manhattan could have five years of excess inventory by the end of next year, if current sales rates continue. The tower’s construction loans don’t mature until mid-2019.