It’s one of the City’s greatest economic development successes, where 7,000 people work for 330 manufacturing businesses in 4.5M SF across 300 acres of landfill. Another 1.8M SF is under development, and there’s room for plenty more. Here’s a look at what goes on behind the yard’s gates. 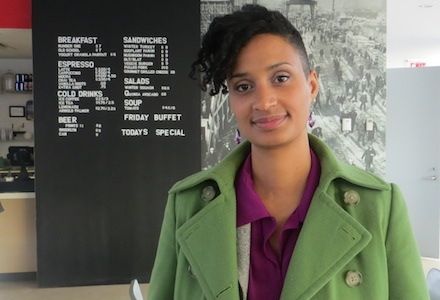 Brooklyn Navy Yard Development Corp’s Aisha Glover, whom we snapped in Ted & Honey cafe in Building 92 on Flushing Avenue, tells us the gates aren’t to keep people out but rather to symbolize the jobs, industry, and "sacred" industrial zoning in an area quickly flipping to residential. Barbed wire atop the fences came down eight years ago, and now the 33k SF Building 92, which opened in 2011, serves as a welcome center, exhibition space, and job training locale for the community. Aisha says the training program placed 250 employees with companies based in the yard last year. Ted & Honey is run by a brother and sister that also have a commercial kitchen on the campus that can serve the rest of the yard, and it sources many ingredients from the 65k SF Brooklyn Grange (which opened in 2012) on the rooftop of one of the yard's buildings. 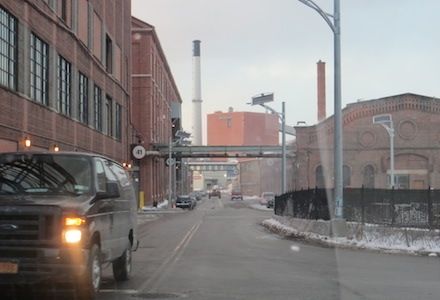 A brief history: The Navy left in ’66 and ceded the yard to NYC. A manufacturing center launched in ’69, but the non-profit that ran it was dismantled because of corruption in the early ’80s and replaced with the Brooklyn Navy Yard Development Corp, which has a 99-year lease. In the past decade, the BYNDC has gone into master-planning mode. That means relocating tenants to allow more efficient land use, plus getting an MTA bus stop on campus and working on yard-wide sustainability initiatives. All 4.5M SF is occupied, and 100 companies are on the waiting list for space. 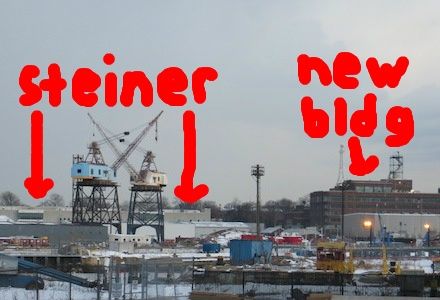 The Navy Yard did 400k SF of leasing in 2013, and terms here run longer than average for industrial: five years minimum. Steiner Studios loves the Navy Yard so much it's expanding its campus (already the largest film-production facilities outside Hollywood) by another 175k SF and has a lease that runs concurrently with the BNYDC’s. In addition to post-production facilities, the new space (both of which we snapped across the yard, above) will house NYC’s first public graduate film school (Brooklyn College’s Graduate School of Cinema) and the country’s first film school on a working studio campus. (We reached out to Lena Dunham, who tapes Girls at Steiner, for her thoughts on long-term leases. Still no reply.) Carnegie Mellon also will open a grad program here. 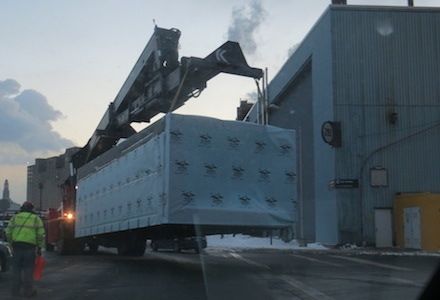 We thought we were lucky to spy some of Forest City Ratner’s modular units moving from its Navy Yard factory to a staging area to await trucking to Atlantic Yards’ first residential building. But considering the developer is putting four or five mods in place a day, this view must be pretty common. 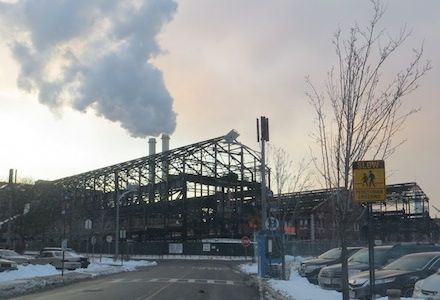 Underway now is the 215k SF Green Manufacturing Center, a spec building that will include the Navy’s former machine shops for servicing ship engines. (If this place really belonged to the Navy, how come Gene Kelly didn't dance here in On the Town.) The BNYDC already has signed body-armor manufacturer Crye Precision to consolidate from 45k SF scattered around the yard to 80k SF here. It'll deliver in a year and also will house Macro Sea’s New Lab—think of it as a coworking space for manufacturers that can share equipment like 3-D printers.

Under renovation is the 960k SF Building 77, the 16-story, former ammunition depot with two-foot-thick walls and no windows. Legend has it that Navy officers located their offices atop the depot (hence the windows on the upper floors) to display their confidence in the security of the location. 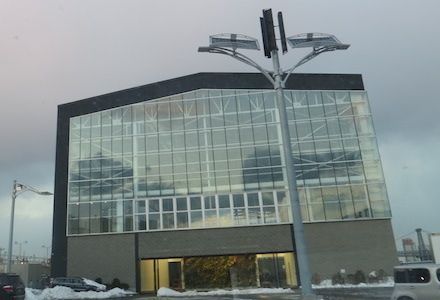 Here’s the Duggal Greenhouse, the 45k SF, two-year-old home for the digital printing company. The open space facing the East River (which flows on the other side from this angle) often hosts events, and the company also uses it to unravel its giant signs (the stuff hanging in stadiums and display windows or wrapping buses). In the parking lot are the solar panel lights that founder Baldev Duggal designed in the building's ecolab. They helped the roads at the Navy Yard stay lit even when Sandy flooded the campus. The Navy Yard, Aisha tells us, is entirely off the grid (other than Steiner Studios). The co-gen plant (the two stacks visible in many of these pictures) actually sells 270 mw of the 280 it produces each year back to ConEd and thus helps power Lower Manhattan. 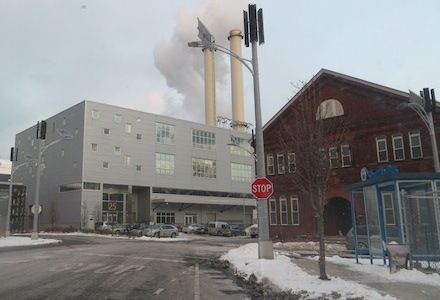 The 90k SF Perry Building delivered in ’09 and built spec to LEED Gold, has the yard’s first wind turbines on its roof to power the building's common areas. Surround Art, which treats and repairs artwork, jumped on the sustainable building and moved from small space elsewhere in the yard to occupy the entire thing, citing clients that want to do business with a sustainable company. To the right is the Navy Yard’s 113-year-old Paymaster Building, where 70,000 employees on 24-hour shifts once picked up their daily pay before walking toward our camera to the yard's gates and on home. Now, it’s the Kings County Distillery, the first local shop to make whiskey since Prohibition (yes, there are tours—every Saturday). Up next: the BNYDC has an RFP out for the development of a 72k SF grocery-anchored center (for the surrounding underserved community) topped by 127k SF of industrial (which the retail will subsidize) at the six-acre Admiral's Row. The BNYDC gained possession of the six acres at the yard's southwest 18 months ago.