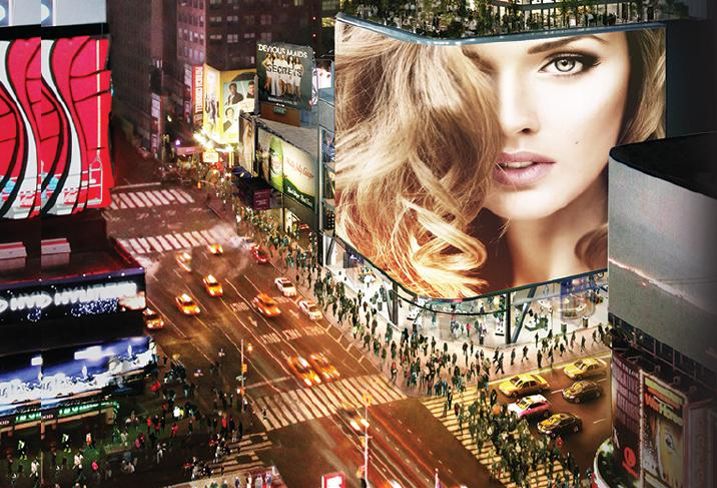 The nearly complete transformation of 20 Times Square is a microcosm of the evolution of its neighborhood.

Steven Witkoff's The Witkoff Group has topped off a Marriott Edition hotel with 76K SF of retail on its basement and first four floors and a nine-story, 18K SF LED billboard, which went online in August and has already started generating ad revenue, Crain's New York Business reports. About 30K SF of that retail has already been leased to the National Football League and candy-maker Hershey for experiential, flagship locations.

While the construction of Class-A office buildings ushered Times Square out of its 1970s image of drug trafficking, prostitution and pornography, its effect has been to create the most popular tourist destination in the world, making retail, hotels and advertising the ascendant forces in the area's real estate. Meanwhile, many of the city's largest tenants have or will soon emigrate to newer office developments, such as Hudson Yards, far from the 60 million annual tourists who mob Times Square's streets.

Witkoff and investment partners Douglas Elliman, Maefield Development, Winthrop Realty Trust and Ian Schrager paid $430M to renovate the office building at 20 Times Square in 2015, preserving the bare minimum of original structure so as not to trigger a zoning review that might have blocked the massive billboard. On top of the $430M was a $48M buyout of the ground-floor retail tenant and a $30M buyout of the previous billboard owners, according to Crain's.

Though hotel occupancy and tourism numbers have remained strong since Witkoff and partners bought into 20 Times Square, retail rents have dropped precipitously then and hotel room rates have edged downward as well. The glut of new LED billboards in the last of couple years has also dampened revenue rates, according to Crain's. Some see such declines as evidence that landlords are prioritizing occupancy over rates in order to keep property values up.

Attempting to deliver a product at the top of a market, as 20 Times Square is doing with its retail, hotel and billboard products, always comes with the risk that the top will become shorter at the wrong time. But Witkoff, like Extell Development and its Hard Rock hotel, is trusting the seemingly endless well of Times Square tourism will not run dry.