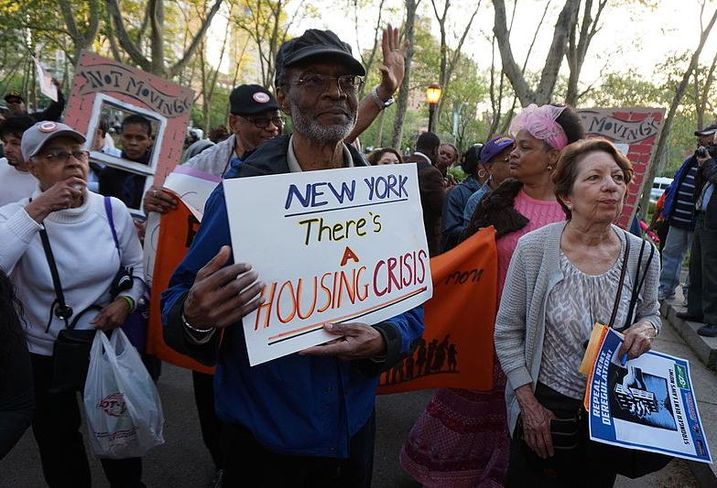 Rents for stabilized apartments will be frozen for the next year, a move that has only happened twice before.

Real estate groups released statements of disappointment at the decision, decrying the rent guidelines process for being political.

“The mayor’s decision to raise property taxes by 23% over the past five years without allowing for fair and commensurate rent increases in rent-stabilized buildings will hinder owners’ ability to pay for basic maintenance, contribute to job loss and ultimately jeopardize tenants,” Real Estate Board of New York President James Whelan said in a statement.

Whelan called for possibly disbanding the RGB, which regulates the roughly 1 million rent-stabilized units in the city.

“It’s past time for the State to seriously consider replacing the Rent Guidelines Board with a standard formula that strips the politics out of the math of operating a building and provides a predictable and stable marketplace for tenants and property owners,” he said.

Real estate lobby group Community Housing Improvement Project also slammed the freeze as political and not supported by the facts.

“The RGB is committed to ignoring its own data so they can do the bidding of lame-duck Mayor Bill de Blasio and adopt a rent freeze,” the group said in a statement released before the measure was voted on.

At Wednesday’s meeting, RGB landlord representative Scott Walsh, a project director at Lendlease, said placing a halt on rent increases without structural reform would be detrimental to the New York City housing market.

“The very simple math illustrates that rent freezes do not work unless part of a broader policy structure that includes simultaneous tax freezes,” Walsh said. “The harsh reality is there is not even a conceptual conversation about a tax freeze before, after or during this horrible pandemic everyone is living through.”

Without a freeze in property taxes, he said, a freeze in rent will prevent landlords from doing the work needed on their properties.

But tenant representatives on the board argued raising rents for renters in stabilized units — many of which house workers in retail or essential services, whose industries have been decimated — would be unacceptable considering how many of them have lower incomes today than they did last year.

“We are, and have consistently been, comparing one person’s business venture to another person’s pain and literal survival, so the fact that there has been an attempt to equate the two suggests a lack of understanding that the people who keep this city running are often unable to comfortably live in it,”  said Leah Goodridge, RGB tenant member and attorney at Mobilization For Justice’s The Housing Project. “That should not be discarded at the expense of profits.”

Goodridge said rent increases would lead to evictions and homelessness, among other things.

The vote comes amid a triple dose of crises: social, economic and health, all of which have disproportionately affected communities of color in New York City and around the country. The Bronx, the borough with the most residents of color, is also the city’s most rent-burdened borough. Black people have also been disproportionately affected by homelessness in New York.

CORRECTION, JUNE 18, 2020 AT 4:55 P.M. E.T.: Sheila Garcia is the tenant member who voted against the rent freeze. A previous version of this story mistakenly referred to her as Caitlin Garcia. This story has been updated.

CORRECTION, JUNE 19, 1 P.M. ET: Patti Stone was one of the landlord representatives who voted against the freeze. A previous version of this story incorrectly referred to her as Patti Scott. This story has been updated.